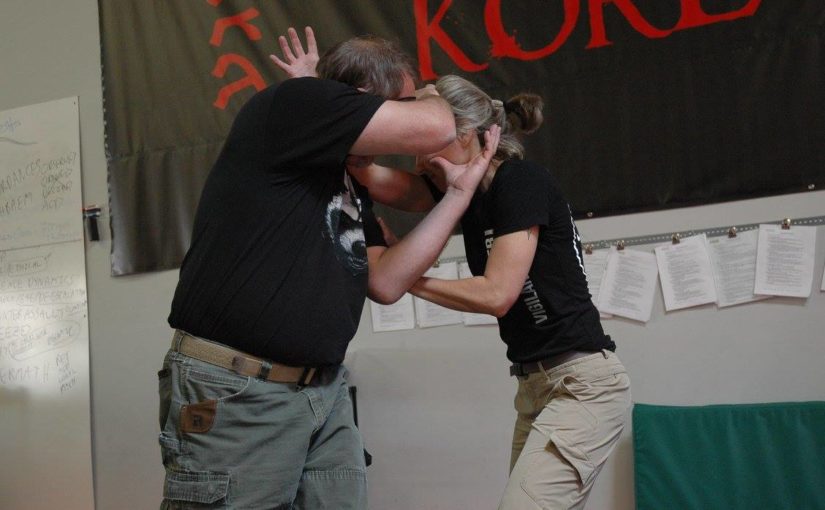 Vctim blaming. Taking responsibility. In assault, especially sexual assault, these are buzzwords that get people to quickly silo into prescribed emotional positions. We rarely find that useful.

In this article we will explore one tool for managing the aftermath of being a victim of violent crime. Our intent is not to present an emotional or political “truth”. This is about taking a situation that many people want to define by a set meaning and adapting it for the benefit of the survivor.

There are some truths we have to explore first:

1) All violent crimes happen within an interaction between the perpetrator(s) and the intended victim(s). Stranger assaults in remote places are relatively rare. Most people are victimized by people they know. There is a relationship. There is communication. The central crime is not the only piece of the interaction and the person cast in the victim role has a degree of control over the antecedents of the crime.

2) Events become violent crimes because of the intent of the bad guy. Looking at point 1— all interactions between any two or more people are interactions. Your morning talk over coffee. The stranger who struck up a conversation on the train. Your waiter taking your order. Any of those events that didn’t become violent stayed peaceful because someone lacked the intent. Bad events are bad events because bad people had bad intent.

4) Just as violent events have antecedents, they have aftermath. How the aftermath is managed has profound effects on the future of the individuals involved.

5) Mentally, humans are almost infinitely plastic. They have the power to change their views of the world and in doing so, actually change the world in which they live.

“The person cast in the victim role has a degree of control over the antecedents of the crime.” One emotional response to this idea is that it is victim blaming. If the victim had control, he or she could have prevented it. Having failed to prevent it, the victim caused the crime. The cause of the crime is to blame. The victim is blamed. QED.

We used “QED” (quod erat demonstrandum) so the stance must be at least valid. Truth is another matter.

Our concern is not whether this statement is true or false. Our concern is that the statement is not useful, and this is key. When pointing out a person’s inherent power and agency becomes described as victim blaming, the net effect on any potential victim who listen is a decrease in agency. A decrease in personal power.

And an increase in the likelihood of future victimization

When the impact of violent crime is fundamentally a blow to the Target’s experience of control, decreasing this individual’s experience of agency and power by way of blame serves no one. Except future perpetrators preying on primed Targets.

The more responsibility you take, the more agency you will have in the future.

Aftermath or not, anywhere in your life, beware of anyone who discourages you from learning, growing, or training. The purpose of training is to become smarter, more aware, stronger, more powerful. If someone discourages that, they have a reason for wanting you ignorant and dull, weak and powerless. Why would anyone want you weak if they cared about you?

The opposite extreme: “It’s all my fault!” can be equally paralyzing. Fault becomes blame and blame becomes punishment. Self-flagellation is not a good place to grow from.

Mentally, humans are almost infinitely plastic. The words people use change how they perceive their choices and from the choices, possible actions. “My fault” breeds blame and self-punishment. “My responsibility” becomes an incentive to understand the variables in the precedents and increase the skills to deal with those variables. It increases agency and personal power. Pause. Breathe. “Responsibility” does not mean fault, does not mean for example, that the target of a rape wanted it, asked for it, or any other reflexive comment you might equate.

Look at the word. Responsibility. At its Latin root, it means to respond. It is on us to choose our response. In this choice there is strength.

To push any agenda, to tell any survivor what he or she is supposed to do or supposed to feel or supposed to experience is to once again deny them agency. It is a second layer of victimization. Seeing the possibility of reframing blame to responsibility to agency is a tool, not a weapon. Something that a person can choose to use. But it must be a choice.