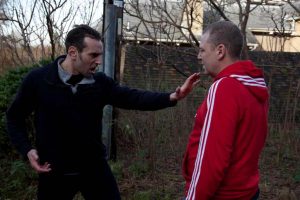 There are several reasons why we find clarification missing from a typical martial arts class. Suppression by governments, suppression by occupying powers and prevailing tastes have led many martial arts teachers to become creative in the way they have justified teaching violence. Desires to blend in personal views of religion and philosophy became so strong within the Asian martial arts subculture in the past century that many have come to accept a pseudo-history whereby martial arts were not skill-sets simply designed to subdue and/or neutralise the enemy. In the west, middle and upper class intellectuals felt a need to justify their training in violent activities such as boxing, wrestling and fencing, and welded on their own philosophical validations. Such validations were then made to retrospectively stretch back into a respective country’s history with the comparable 19th century romanticisation of medieval chivalry in the west, bushido in Japan and xia in China. Another motive to obscure the objectives of martial arts classes is the often commercial need to appeal to a wider audience and to offer more to retain students.

Because of my emphasis on clarification I make my teaching service-driven. I begin any course – be it a one-to-one or a seminar for a group – by asking my client what they specifically want and offer an honest answer as to how I can best fulfil that demand. If I agree to take on the client I can then stick firmly to our agreed objective without risk of either of us deviating. I deviate and tangent enough within a subject, so I am grateful for those parameters to keep me in check.

I recall once being asked by a small group to teach a martial arts course. The attendees really weren’t sure what they wanted, but it appeared that their primary interest was to undertake a fitness activity. After we worked out a rough definition of what sort of fitness they were after we agreed upon a combat conditioning course with a leaning towards Muay Thai. All went well until just after the first class one member of the group made a passing comment about what they could now do if someone tried to attack them. The comment was made half-jokingly, but nonetheless the group immediately began a serious hypothesis on how they would apply the skills they were learning and followed this with an honest evaluation on whether they would a) remember them and b) have the courage to use them. The entire conversation must have lasted less than two minutes before I felt I had to interrupt. I quickly explained that, as per my brief and our agreement, the course they were embarking upon was not for self-defence. It wasn’t really a Thai Boxing course, but used aspects from this art as an engaging way to improve cardiovascular fitness, strength and flexibility. I explained that if they wanted to learn practical self-protection I had a course that focused on this discipline.

What put them off then, as it had done when I first offered it, was the two most important ends of the self-protection training scale. Good self-protection training consists of mainly personal security non-physical “soft” skills. At the other end good self-protection training should include some form of pressure testing. Both are quite simple and straightforward, but aren’t necessarily comfortable. The former can be boring and difficult to absorb for someone who doesn’t have much interest in psychology, behaviour science, criminology, criminal law or the adaptation of warfare/law enforcement strategies. Besides, they can be difficult to apply and can override certain behaviours outside of the class. It is one thing to practice your combination work on the heavy bag or to go through katas, but it is another to properly assimilate a self-protection mind-set into everyday life. Pressure testing is usually not popular with many who don’t have a predisposition for this type of combat. Self-defence pressure testing should be a form of very intensive asymmetrical fighting and that isn’t usually a very pleasant experience.

Physical fitness is important in self-defence, but is largely a by-product of punitive mental conditioning through various ordeals and the development of good physical “hard” skills. Many civilians don’t really want actual self-protection or self-defence training they just want to produce a physical expression against their fears of interpersonal violence. This is easily catered for by hitting pads and performing techniques on compliant partners. One can see why so many martial arts teachers are tempted to leave it at this stage and exploit the demand for delusion in the market. There is almost an unwritten and unspoken contract between the student who asks the teacher “Tell me a lie that will make me feel better” and the teacher who justifies his willingness to do this by obeying the economic law of supply and demand.

Be clear about the purpose and context of your training. It’s a simple rule that is easily forgotten.[i] Whether you are approaching a new class, training with a new teacher, beginning a certain exercise or training a particular technique, the cross-trainer needs to be clear about his objective. He needs to be clear about why he is dedicating his time and energy into this particular area of study. It is naïve to rely on even the best of teachers to take you exactly where you want to go. Unless the teacher is helping to manage your personalised cross-training programme, he is going to have a different agenda. His job is to teach you the discipline you have chosen in his own way. If you are undertaking one-to-one training he will tailor it more to your demands, but it is still a lot to expect him to understand how this experience will fit in with your overall martial arts education.

Besides you don’t really want him to do that. You want him to teach you what he knows best. For example, imagine asking a Western Boxing coach to improve your Muay Thai punching techniques. In principle, this is a great idea. However, you are not really getting the most of his experience and knowledge if you insist on having you both stand more square on, change footwork and to limit upper body movements in line with Muay Thai. Your purpose here is to train in Western Boxing as if you are a western boxer. Outside of the lesson it is time for you to put the work in and see how it applies to your Muay Thai game.[ii]

Being clear about the purpose of any exercise is crucial for a cross-trainer. Being actively involved in different disciplines calls for strict and mindful time management. Objective defines an exercise – be it to test a single technique or test one’s abilities in a certain area. If the agreed objective of a technique exercise is test the efficiency of a rear naked choke then it is pointless to continue with another technique when the choke has been thwarted. A better use of time, energy and resources would be stop and restart. Unfortunately the cognitive reasoning of the brain often takes a back seat once matters get heated in a physical situation. It is quite common to see a pressure test centering on take-down defence deteriorating into a ground game.[iii]

The same attitude should be carried over into your solo training. This is where a lot of the good work is done and also wasted. It can be mentally tough enough for most people to take the initiative to train properly outside a class in the first place, be it alone or with a fellow student. It is even harder to then apply cognitive thought processes to encourage greater skill development and continued learning outside of a classroom environment. The cross-trainer has to go beyond what has been prescribed in lessons. He needs to do more than rehearse routines to fulfil grading criteria and needs to do more than improve his physical fitness. However, this takes a special extra kind of effort and a lack of commitment to this type of effort is what leads to the cross-trainer becoming confused with the various tools he has at hand. It is much less taxing on the mind to just lose one’s self in the superficial demands of an undetailed workout.

So the heavy bag ends up being used as a one dimensional repository for any random move the student chooses to throw. Shadow boxing becomes a freestyle dance of favourite movements. Focus mitt holding becomes a more energised version of the punching bag situation but little more. This comes from the person training not having a clear plan in their head and therefore not getting the most out of their training equipment, their training partners or themselves. If you are going to use the bag as a stand-in for a training partner then you are going to need to imagine the fight and stick to certain target zones so that you hit accurately. You also going to have to move with the bag or around the bag, depending on the context of you are training. You are going to have to plan your rounds or sets. Is this going to be about technique, improving speed or developing raw power? Are you going to theme your workout as lessons are often structured? What other equipment are you bringing into your training session?[iv]

Clarification defines the purpose of what you want to do in all that you do. Begin with a clear idea and make sure you return to that idea as often as possible.

[ii] See my chapter on “Attribute Training” in my aforementioned e-book to understand how to get the most out of these lessons.

[iii] My chapter on “Specific Training” in “Mordred’s Victory and Other Martial Mutterings” details the importance of specialised pressure tests.

[iv] I have a chapter on “Solo Training” in “Mordred’s Victory and Other Martial Mutterings” that can help provide more insight into this often abused side of learning.