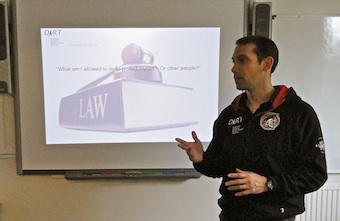 This element of de-escalation tactics is perhaps the most important and most neglected area of personal discipline.

To successfully de-escalate a situation you usually

For many people the ego is the Achilles heel of successful conflict avoidance. It is not unusual to find individuals who have either set false standards of behaviour for themselves, inappropriate goals, or believe (often incorrectly) that others expect certain types of behaviour from them. Many have a needless value that they put on the (temporary) perception of themselves by others.

Conflict de-escalation is still a form of conflict. In simple terms to prevent force or greater aggression from being used the other party needs to feel that they have either won, or at the very least that they have not lost. In many instances this is about saving face (in front of their peers) and to do this you may need to be seen by them (and perhaps by some bystanders) as having given in. The paradigm shift that a lot of people need to get their heads round is that this does not mean that you have lost, rather you need to understand and appreciate that your victory is in achieving a different aim (lack of violence, criminal damage, injury or prosecution) and one that may not be immediately apparent to the other person.

Do not think that you have to win, think rather that you do not have to lose.

If you have good trouble avoidance protocols then the likelihood or frequency of your being involved in a de-escalation event with potentially serious consequences while surrounded or observed by people that know you well should be low. In such instances, acquaintances whose judgement you value should not view you harshly for taking action that avoided any escalation in aggression or violence, even if that means ‘giving way’ or apologising for something that was not your fault.

If a similar instance occurs when you are surrounded by strangers who you are unlikely to ever see again, should you care what they think? If you are in a venue where even saving face for the other person carries a high risk of being attacked for being weak then you are in the wrong place. A location where a level of aggression that risks or inevitably results in physical conflict is the only acceptable response is not one any sensible person should frequent.

Whether strangers or acquaintances, people whose judgement you value should recognise the value of taking steps that avoid risking injury (and property damage) and further repercussions to both yourself or another person.

Pride in your combative skill-set can be a dangerous side effect of martial arts training, one that brings for some a subconscious fantasy promoted by films where the subject uses their skills to beat or humble another person. It doesn’t help that this is the mental picture and expectation that most non-martial artists have of their martial art practicing friends.

You do not need to let your pride go, you just need to change its focus.

This four part series has been described as a brief introduction to de-escalation. That is all it is, no more than a starting point. Each of the four umbrella headings that I’ve chosen are arbitrary, and represent summations and generalisations of a vast topic. Since I have generalised while writing this not everything that I have said will be right or applicable all the time.

I do encourage you all to do your own research and training on this topic, but caveat emptor. There are a number of writers and training providers out there who may make you mistakenly feel ignorant or inexperienced because they use ‘specialist’ terminology to refer to most elements of what they are teaching. In my experience this is marketing dross rather than a useful educational tool and it simply creates a false divide between those ‘in the club’ and those outside. In the majority of cases the specialist terminology employed has no basis in the fields of psychology, psychiatry, criminology, medicine or policing – it’s simply an in-house teaching tool.