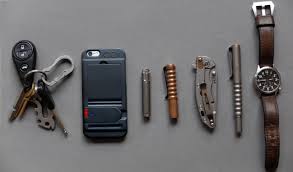 Every Day Carry (EDC for short) is a big part of the preparedness and self defense mindset. If you don’t have the proper tools at hand, for the particular situation, it obviously can be difficult to come out on top. However, like everything else, once an idea becomes big enough, commercial interests take over, and at best, can make it difficult to determine what you really need, and at worst, will sell you some hinky, poorly designed crap that is worth less than nothing.

One of the biggest problems is the dividing line between collectors and users. This is most obvious in the custom knife community, when a maker becomes famous, the collectors take over, and all of the sudden, that really cool gear is no longer available for the users. Another issue is the things that get pushed into the field by collectors. My biggest pet peeve is the EDC pictures that get posted with expensive knives, titanium combs, Single or Double Finger knuckles that aren’t actually designed to use, and toys like titanium tops and spinners, but no usable, effective gear. No medical, no back up weapons that work, just expensive toys that exist to separate the fool from his money. It makes serious EDC users look like the same kind of fool, and judgement soon follows.

Now, if you are a collector, and honest about it, that’s cool, but why try to attach yourself to a different community that you don’t actually participate in.

So, to avoid this, and other downfalls, I have talked with others, and here is what we, from a users point of view, think the real considerations for EDC should be.

A knife is not a less lethal back-up weapon

A knife is considered just as much a lethal force tool as a gun, and when you pull one, even if your intent and mindset is ‘less lethal’, in the eyes of the law, you introduced a lethal weapon into a confrontation. If this confrontation did not rise to the level of a lethal force encounter, you have just committed a major felony. There are several options, which may or may not be legal in your locale, that cover the less (or less than) lethal back up. Collapsible batons, pocket sticks, knuckle dusters, saps, blackjacks, monkey fists, pens, pepper spray, among many others. These are the areas you should be looking into.

Carrying more than one firearm

This is controversial, and opinions really do vary, but from most peoples experience, a back up gun is usually not needed in any encounters. Especially if you carry a modern, high capacity pistol, with a few spare magazines. Even though we do live in a world with terrorism, violent protests, and gangs, you are still more likely to deal with a mugging or a robbery than having to play anti-terrorist in the mall.

If your goal is to truly be prepared for bad things happening, and you skip over carrying at least a Blow Out Kit, you are not preparing yourself for reality. Even in the event of a terrorist attack, you will more than likely have a better chance of helping save somebodies life with a tourniquet than gunning down the bad guys. Look at how many people were saved in the Boston bombing by people using tourniquets. And do yourself two favors, get good gear, not budget made in China counterfeits, and get training. There are several amazing people and companies offering good training in real, life saving med skills these days. That will contribute more to your survival than anything else.

Buying things just to have them, or belong to the club

Once again, there is nothing wrong with having things, and if you want to collect, awesome, but collect and buy what you want, not what your peer group says is cool. If you like cheaper knives, do it, be you, don’t think you need to have the latest $500 custom knife to fit in. If that is your social group, no matter how cool they seem, they are not cool. Conversely, if you buy stuff because the group says you need it to survive, check with other sources. The price of this stuff can add up pretty quickly, and most of it is bunk. You really don’t need that much. Save your money for other cool stuff, like a date with your better half.

In closing, problems always comes up when we both over think and over socialize on things. We always need to come back to the reason we are doing something, and the reality of what is needed to accomplish what we are trying to do. Seek out opinions from people that really do what you are trying to do, and listen. A little bit of good gear is much better than an overload of crap.