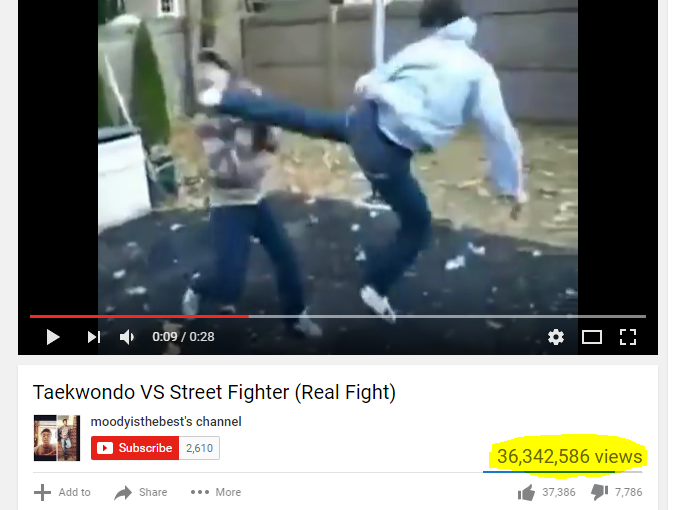 Why do people watch “fight” videos?

Watching videos of other people fighting and engaging in violent confrontations is a hugely popular pastime. Videos of this nature regularly receive millions of views on YouTube and Facebook.

What are some of the reasons that drive people watch violence? Here are a few.

One type of entertainment is the desire to watch someone “get what he or she deserves”. These videos require a clear cut Good Guy and Bad Guy to root for and against. Many times the video will be titled or subtitled in a manner that tells people who is who. For example, Gang Member Picks on the Wrong Guy, or Bully Gets His Ass Beat. These titles influence the viewer with the power of suggestion regardless of the true nature of the conflict.

This type of viewing is particularly popular among those who like to stereotype people by race, religion, gender, and occupation.

The focus of this writing is on #3 – How to learn something from a fight video.

In order to actually increase your understanding, you need to conceptualize how the video relates to your own potential behavior or the potential behavior of someone you may come into conflict with. For example, if you watch a video of a person “freezing” and you think that you would never freeze, or that the victim is just an unaware person, whereas you are always aware, then viewing this video teaches you nothing.

In this case, most likely you watch these videos due to their entertainment value for you, or the videos confirm your view that other people are helpless “sheep”, while you are not. Watching the videos becomes a means for you to feel superior.

But if you open yourself up to the idea that you too might “freeze” or be caught unaware in a similar situation, then the video has potential educational value for you.

When it comes to your own conflicts, there will be at least one human involved and that is you. The more you learn about other people’s behavior in conflict situations, the more you will learn about your own potential behavior in similar situations. If you think “I would never do that”, then you will not learn or increase your understanding on the subject.

Therefore, when you watch a conflict video, look for things occurring that surprised you, or that you didn’t think would happen. Watch it with and without sound. Ignore the title and descriptions. Come to your own conclusions. Recognize when events unfold in a manner different than you expected. Don’t just passively watch the video and make snarky comments.

Put yourself in the shoes of the victim/predator/combatants. Ask yourself, what would I do in a similar situation and why? What are other possible outcomes that could have happened? How would I have dealt with the aftermath of the conflict? Do other viewers notice aspects you didn’t? Try to determine if what happened was primarily situational or an example of systemic human behaviors.

If you don’t want to engage in this type of mental workout, that is fine too. But don’t kid yourself, you are not watching fight videos to learn, you are watching them for entertainment.