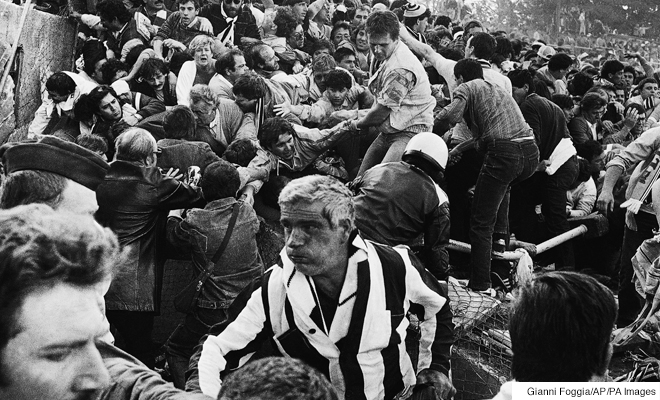 In my previous article ‘Shitters, Nearly Men and Inwegos’ I introduced three broad types in the career of a football incident and alluded to a fourth type. The Journey from Shitter to Nearly Man is not compulsory, people can start at any point but generally, for the majority of football hooligans it is a journey, an apprenticeship served. These people are  involved in social violence and are jostling for positions in the belonging area of Maslow’s hierarchy of needs.

Securing a position within the mob is the first priority, however lowly a shitter you may be, if you are in you are in and will begin to self identify. Once in it is about bonding with the group and acquiring then increasing status within the group. Let’s take those in order. Bonding is key, we have seen how the group, made up of different types works as a whole, it is more than the sum of its parts. The anonymity and contagion described by Le Bon, (See book review in Conflict Manager February 2016), help to lower thresholds of what society in general regards as acceptable behaviour so that individuals can regress and settle into monkey brain thinking and behaviour. So acting and thinking exactly like those around you successfully integrates you, the rhythmic chanting and aggressive territorial group monkey dancing rapidly reinforces the in group feeling. This together with dehumanised and emasculating songs and chants directed towards the enemy helps to other them increasing the intensity of the bond. Now we have a tribe.

If it sounds a bit textbook that is because it is, exceedingly so, Go back and watch the Chelsea Cardiff video again with the sound off. By being a part of the mob, by sharing the intensity of the experience then young men bond together, it is centuries, millennia old process that is constantly being recreated by our so called modern brains. Things we would never do as an individual are now possible when the monkey brain liberates you from the restraining frontal cortex.  Once bonded increasing the intensity of your behaviour and gradually moving closer to the action can increase your status especially if repeated over a period of time, you see there are shitters and shitters and location is the key. At the back is ready to run, at the front and you can still run but you are getting closer to the fire as it were, beware Icarus. As progression takes you into the role of Nearly Man you step away from the Shitters, this is a testing middle ground but an increase In status until you pluck up the courage and Inwego.

The Inwego is the top status in this group but remember the Inwego is also the Outwecome. In the clash in question there are many hooligans and at first very few police, if they wanted to they could seriously go for it but they do not, there is no sustained fighting of anything more than a couple of seconds and much of that is sniping shots and wild swinging, trying to hit and not be hit and here is where the usefulness of that video ends for me although not the typology.

What characterises these groups is they were not mass mobs. These were close knit firms where entry is based on ability.

I choose Businessmen as the name for this group of individuals as all the ritualistic behaviours associated, indeed central, to that displayed in the Chelsea Cardiff clash, and the location it took place in are superfluous to them. It is ability to do the business that matters not shouting, chanting and dancing in the street, but fighting.

The businessman has graduated from or in some cases bypassed all that and simply wants to fight, many are just psychopaths  want to hurt others, the football is irrelevant,  to do the business in the most efficient manner. That is not to say that there will be no monkey dancing, there will, but it is kept to a minimum, pre fight intimidation will involve the monkey for sure but this is usually short lived, here the fists and boots do the talking. All the noise and theatre of the big clash like Chelsea Cardiff is a hindrance, it will attract the attention of undesirables, the police.

The type of unit found here is much closer knit and usually by invite only, size can vary but you have to have earned the right to be there. Staying there means regularly reproducing what got you there which means going toe to toe and not quitting, you fight until you win or until it’s unwinnable, No chanting, no colours, small groups of men called firms hunting one another or steaming into the bigger mob with its different layers and running them. A small committed unit can do that, been there done it, Sometimes we travelled away 25 strong in the back of a panel van, (avoiding police detection), and parked in the home team’s territory deliberately so it could go off right in the middle of them, sometimes we travelled with as few as four, me and three brothers, nobody ran if the fighting started even though on one occasion one of the brothers went to prison for 3 months, we were chasing a much bigger group of home fans who picked a fight with us then did not like it when we got stuck in, doing the business, and they ran, we got jumped by some guys in a car, so fought them, unfortunately they were plainclothes police, again a tale for another day. You see the bonding amongst young men who hunt and spill blood, and risk spilling blood, is very strong.

The businessmen are different from the Inwegos in that the latter have reached their high point, they excel in social violence, they have reached their pinnacle and are happy there as belonging and status are achieved, they have reached the highpoint of their career. For the former something different is happening, these individuals have achieved the highest point on Maslow’s pyramid, all the previous layers are accounted for, they are above the game and are able to self actualise, violence, often brutal and extreme violence is what they are good at, to them engaging in a violent encounter is their version of playing a solo violin concerto. I can vividly recall some of the prolonged violent exchanges I have been involved in as if they were seared into my brain. I can also remember, and sometimes  crave for, the exultation that came from standing tall if bruised at the end.

This is not about myself but it is impossible not to recall what it felt like, how the buzz felt as that cocktail of drugs raced around the body, despite the hurt that often came later, and how long it lasted, it felt like days. Moving to doing the business from being an Inwego is a big step, some do not take it, I had friends who were very violent psychopaths, we used to co-opt them into our firm for ‘special’ occasions as did all the other firms, they only came along to inflict pain on someone, if you are an Inwego or a Nearly Man these people will eat you up for breakfast.

On a personal note when I finally discovered martial arts I thought it was cute, it still is, but however rough we make it, I like ten guys on 2 msq mat gloves and gumshields in and free punching, it’s still not going in on someone who will put you in hospital if they can with the intent on doing the same. It is why I glibly say Ju Jitsu is like methadone to me.

I no longer attend football matches, I am too busy and the football was woeful. I rarely look at the scores even and have lost contact with those I used to associate with, back in the day they were like brothers to me, we built and held reputations. Now I see one or two of them, some are dead, some old men, one walking with a stick, they once walked tall.

I have read much of what academia has produced as analysis of football hooliganism as well as the writing of former hooligans. Much of the former is flawed and occasionally distorted, I actually wrote to one author who published his PhD as a book, I pointed out how he was totally incorrect on 2 examples in his book, major errors, I know I was there and I started one event and I knew the person convicted of the second who he said was never caught, despite being all over the front page of a newspaper he quotes multiple times.

The latter are OK but no rigour and are often boastful. For the third time I will make it clear this is not an academic essay, it is something between academia and personal recall. Shitters, nearly men and inwegos exist, and so do the businessmen.

So I hope I have created a typology of those involved in football hooliganism. You can take this model and apply it to most models where group violence occurs, these groups will have different reasons for being there but the types will be present, think Ferguson, think the recent protests against migrant rape gangs in Europe, think Black Lives Matter, turn on the news, they are there.

The majority will be Shitters, then some Nearly Men, some Inwegos and lurking somewhere in the back streets beyond the fringes are the Businessmen.