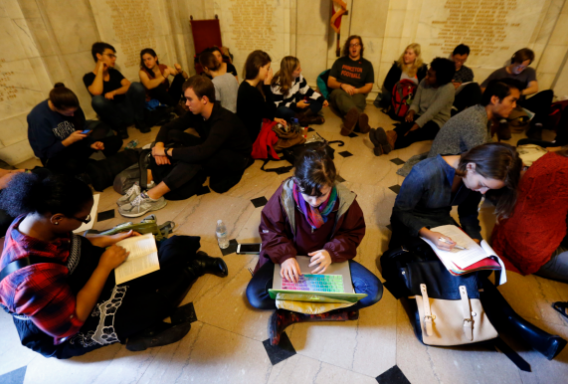 Well safe spaces are certainly in the news these days, social media and old fashioned media, newspapers, TV and radio, are certainly making us aware that they exist. The whole issue around safe spaces is polarising rapidly, hell I have had to retreat into my room to get this out of my head. Yes I have a room that is just my own, my own little retreat at Smith Towers.

Currently I am sat at my desk typing, I have a really nice leather sofa my wife bought me as it is really cosy for me to take a nap on. I have an exercise bike, my weights and bench and a free standing punch bag. There are lots of books and a ton of training gear and weapons, I like my weapons, although I have moved all my swords and some of my sticks higher up the house.

Its a cool space, quite big with a large bay window overlooking the street. Most of my toys are in here and it has become a bit of a sanctuary. My wife is next door in the lounge listening to some David Bowie on vinyl, it is horrible outside, cold, wet and windy, so today the heating is on an we are tucked up in the warm. We are in our safe space, our home.

In the last week I have taken a lot of bookings for self defence training for next year. Some of the organisations I work for are booking into July and August and another organisation, a very large one, is booking me from January through to March with a hell of a lot more to come in September and October. Things are looking up, a few years back I was really struggling and could have easily given up, but as you can guess it is not in my nature, so onward and upward I hope. It is also fantastic that our self defence and Ju Jitsu training are starting to fill up too, we work damn hard to make it as good as we can then look to see how we can make it better and as I said last month, I have surrounded myself with some incredible people.

And here is the rub, these are people who can disagree, we are not a bunch of sycophants crawling up each others bums. I am pretty strong minded and determined, when I get my teeth into something I tend not to let go. I really can think of nothing worse than inaction. I like to do things, to drive things, to create things. I have a very active, and I like to think, creative mind. I love debates and discussions, I enjoy having my ideas challenged. Edward De Bono, the father of lateral thinking once said, “What is the point of having a mind if you cannot change it”.

That is one of my favourite quotes, but I was not always like this. I remember a discussion in a bar with a few friends and I was listening to them argue over something, what it was is lost, but one of them asked me what I thought. My explanation straddled the two opposing camps views. After I finished he said to me that since I had been to university I could no longer give my opinion on one side or the other as I always had before. You see when I went to college I was 28 years old, not a kid. I had children, I had worked for may years in different occupations, I had, in may ways, ‘been around’.

When I went from the career of an autodidact to entering formal education I was presented with the greatest riches in the world, vast caverns of knowledge were opened up to me, I went in as someone with very strong left wing views, I still had left wing views when I left but exposure to many other viewpoints had changed me. Previously I would have closed down people who spouted ideas or opinions I disliked, the sort of stuff that still goes on, mention immigration and you are a racist, disagree with gay marriage and you are homophobic, your ideas are foul pollutants to the mind of the right thinking people.

Now remember where we started, in my safe space. Well you are welcome to come into that space and to talk, discuss, debate. Threaten me and you may meet one of my toys before I role you unconscious ass out of the door, but my safe space is a space where ideas are welcomed, controversial or not. I have some wonderful friends and family but there is not one that I agree with on every subject. There are some things that are not discussed with certain people because those involved Know they disagree and we can agree to disagree. Where is the problem with that, its how we manage to co-exist. I the last Conflict Manager Marc introduced the work of Jonathan Haidt, he got me to read ‘The Rightous Mind’ earlier this year, I did and agreed with Marc that this was a profound piece of work. It took me right back to my days as a keen as mustard sociology student.

When I discovered sociology in all its complex and contradictory beauty that is when changes started in me that are still evolving today. I was like a sponge at first eager to absorb as much knowledge as possible and I did. The difference between autodidactism, where I grazed widely and freely in the pastures of my own mind, and the formal education I enjoyed at Northern College and the University of Warwick, was that I was now exposed and forced to consider things I would not have done had simply stayed with my own choices. The most wonderful experience of developing the ability to think critically is in my opinion, what separates us from the animals. Critical thinking is the intellectually disciplined process of actively and skillfully conceptualizing, applying, analyzing, synthesizing, and/or evaluating information gathered from, or generated by, observation, experience, reflection, reasoning, or communication, as a guide to belief and action.

I remember other students criticising sociobiology, it was the whipping boy of ideas, nonsense, racist sexist, its originator Wilson was pilloried, I felt guilty because I thought there was something in it. I wanted to like it, it was my guilty secret. Advances I understanding the human genome have largely validated most of what Wilson was saying. Haidt’s book on moral psychology is a must read if you want to know what makes us tick. Read it and you will begin to understand yourself more.

Its what I like to do in my safe space. These days I do not go to university or attend many formal learning events, like most people I can now access vast, infinite amounts of information on my laptop and even my phone. However, information is not knowledge. Information has no intrinsic value just by being, it is only of used when it is digested by the brain, turned around, mulled over, looked from different angles, reconstituted and applied. The brain is like any other part of the body, if you do not use it enough it will atrophy.

So when I hear stories of people needing safe spaces so that the can be protected from ideas they do not like, my heart starts to ache. When I hear this from students at universities it makes me really sad. I listened to a really interesting debate on the radio the other day between a feminist blogger and comedienne and a student union official. The former had had a booking to do a show at a prominent UK university cancelled because some students did not like her position on the sex trade. She supports the punters being arrested not the women, so the banned her, she was effectively declared a non person. Yes the thought police have arrived. I listened to much of what was discussed with disbelieve. WTF is wrong with people.

If you are so profoundly weak that the fact that somebody has an idea or political view you do not agree with, that you hide behind rhetorical name calling and censorship, then you surely must kill yourself now before the evil idea can get you. I shudder to think of a world where people like this end up in charge of things, and guess what, if you start to look around you they very often are.

Personally I like to call a spade a spade but am smart enough to know I can do more than just dig with it, go ask Rory about affordances. So for me a safe space is where we are challenged because without challenge we cannot develop as humans, a safe space is not hiding under the bed afraid of the bogeyman, its coming out and confronting the bogeyman. I have a safe space other than the one I am sat in, its behind my two fists and behind me is a safe space for hose I protect. They are the only safe spaces I want. Man up world.