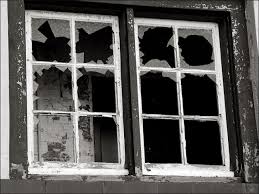 Today let’s have a look at a partially-discredited theory of crime-prevention that was proposed to work on the large-scale [cities, etc.]

We’ll discuss the aspects that did and do, indeed, work.

We’ll briefly ponder the unintended consequences of following “broken windows” to the extreme.

Then we’ll wind this whole thing down discussing how the “broken windows theory” can work in your life, both in self-protection and the mundane aspects with none of the negative unintended consequences, unless you dig randomly stopping and searching yourself, then it’s a win-win.

Let’s start with, what exactly is the “broken windows theory”?

In precis, Wilson and Keller postulated that by increasing focus, or policing of small crimes [vandalism, public intoxication, toll-jumping, and the like] there would be a decrease not only in these petty crimes but also in major crimes.

The “broken windows” of their research paper’s title points to the fact that neighborhoods with high incidences of broken windows and other such vandalism are also signals of higher crime areas. This is a no-brainer as this is basic signaling 101.

We are not surprised by such observations, and lest anyone is skeptical that broken windows may or may not signal something I offer the following thought experiment.

You are alone in an unfamiliar city, walking back to your hotel. You are confronted with a choice of routes.

On the other route, we see a car on blocks with broken windows, graffiti on walls, and an over-turned trashcan.

Which route back to the hotel do you choose?

Now, at this point we simply see confirmation of broken windows as a signal to something, but what? Why would we assume the evidence of vandalism is also evidence of crimes a bit beyond.

Wilson and Kelling demonstrated an interesting linkage between petty crime [and I hate using that word, as to the property owner “petty” still means loss of time, money, and peace of mind] and more egregious crimes.

It seems that habitual petty crime committers are following Pareto’s Principle, that is 80% of ALL crimes are being committed by 20% of the “lawbreakers.” In other words, most of the damage in the world is done by some very busy perpetrators. Those with no compunction about randomly damaging property or toll-jumping also showed a higher likelihood of committing other crimes.

Keep in mind the link is not 100% causal, meaning that every kid with a spray paint can caught tagging a building is not necessarily destined to commit a major crime but…it does mean that that petty-crime signaler does show a far far higher likelihood of something more dire or damaging in the future than the kid we see pushing the broom in the supermarket.

Now, where this went awry had nothing to do with Wilson or Kelling, it was more a case of overreach or prior restraint. Some police departments moved from cracking down on petty criminals to attempting to stop petty crimes before they occurred—and prevention is always a great idea, but the distasteful tactics of stop and frisk and, in some cases, overzealous profiling took a solidly researched idea and moved it to something akin to the “precrime” storyline of the film “Minority Report” based on the Phillip K. Dick story.

Lest, any of my brothers in blue think I have simplified, and I have, I’m on your side—bad guys should be stopped—thank you. But, also, the constitution is pretty sweet, too.

Let’s take this to an area where we can probably all agree, and extract some personal utility out of the “broken windows” theory.

I’ve been doing this martial arts, self-protection thing for years upon years and I don’t think my estimation is off-base when I say most every self-defense class I’ve witnessed, self-protection tome I’ve slogged through, “How to be Safe & Kick-Ass” article I’ve ever read begins in SHTF territory.

There is indeed a place for SHTF tactics, but jumping to there from the beginning and perhaps, too often, gives far too little weight to all the wee tactics and observations we could be making along the way. Tactics and observations that might render all this SHTF side of things a bit less than useless [if we’re lucky, that is.]

I think we can all agree that locking doors, a worthy alarm system, well-lighted entrances on a home in a “good” area are all more useful than being slack in these areas and spending all your time on working dry fire “Clear the home” drills each weekend.

Let’s run a brief and admittedly incomplete checklist of personal “Broken Windows” tactics and see how many we adhere to:

You get the idea, policing ourselves for the small habits will prepare us for greater vigilance if ever needed. Always jumping to SHTF is akin to skipping the purchase of the small kitchen fire extinguisher for a chance grease fire, and rather opting for your own fire truck if the house should ever goes up in a blaze.

Take care of your leaky faucets, your creaky doors, your broken windows before they bring the whole house down.