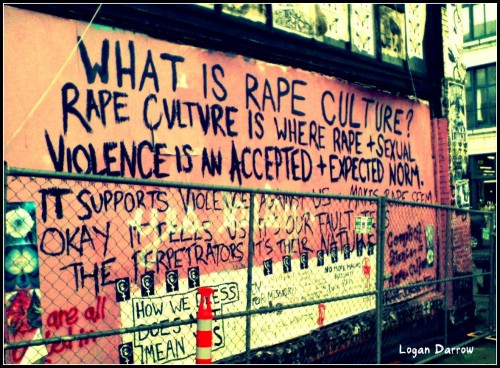 In recent months, I’ve read a lot of articles in the media, by journalists and bloggers, that suggest the solution to rape and sexual assaults against women, is a simple one: men should stop raping/assaulting women. This is also an argument that is extremely prevalent on US college and university campuses. Unfortunately, when we look at the facts around these cases, this argument doesn’t make sense- it has no basis in reality. It is a popular opinion, but one that can lead us down some dangerous, although unintended, paths including victim blaming, and putting the responsibility for certain aspects of an assault onto women, rather than the assailant – something that was implied throughout the recent Brock Turner case.

Rape is often seen as a crime that is primarily motivated by sex, and is often attempted to be understood from this perspective. Many people still believe that rapists are sexually frustrated individuals driven by “normal” sexual desires and urges, that they are unable to fulfill due to the lack of availability of a consensual partner. One of the reasons that this view exists is because we try to understand the world as we see it, rather than accepting that there are individuals out there who have a different world view to ourselves; who see things differently to us. Many rapists have partners and/or are married and have an active “consensual” sex life. It is not the need for sex that drives the rapist, but the urge to exert power, anger and control over a non-consenting victim.

A rapist is not looking for consensual sex through negotiation, only resorting to forceful means when this doesn’t work; from the outset they are looking to dominate and control a non-consenting victim. Only when we accept this will we start to recognize rapists for who they are and begin to understand the experiences of their victims. If we believe that sexual assailants are actually searching for consenting victims and only rape out of frustration when their target refuses, we may inadvertently introduce the suggestion that the victim may in some way be responsible or guilty for leading this person on, and contributing to their frustration either by the way they dressed, acted or behaved, etc. This is a very dangerous door to start opening, as it can be used to explain away a sexual predator’s nature, behaviors, and actions.

There is a big difference between someone who is pressuring, negotiating, and shaming a person into consensual sex, and someone who is seeking a victim to sexually dominate and control against their will, and unfortunately this difference is rarely acknowledged. In our current culture, it is becoming more and more acceptable to behave in a misogynistic way towards women, and for men to have an attitude of entitlement towards sex. However, this entitlement is based on the belief that women should want to consent to have sex with men, and it is only a matter of pushing and pressurizing to get this consent.

There are of course women who have consented reluctantly to sex with men they didn’t really like, or would rather not have, after being pressured and bullied, however from the man’s perspective and understanding it was consensual; they were seeking consensual sex, through anti-social means. Do such attitudes need to be addressed? Absolutely, however they need to be addressed, separately and differently to rape, as the motivations of the individuals who engage in them, are very different to those of rapists. To try and deal with them in the same way and with the same methods will not be successful. These anti-social bullies are motivated by sex, whereas rapists are motivated by anger and the need to have power and control over their victims.

Rape is a premeditated act, committed by a sexual assailant, who has fantasized, and to some degree planned and orchestrated their assault – that may be as simple as deciding not to take “No” as an answer. This is different to an anti-social, bully trying to negotiate a “no” into a “yes”, in order to have consensual sex, with a possibly reluctant and hesitant partner. The sexual assailant will have fantasized and masturbated over their control and domination of an unwilling victim, who they can humiliate and dispense their anger towards, whilst the anti-social, misogynist will fantasize about a willing partner who wants to please him, because he is entitled to be treated in that way i.e. women want to have sex with him. One can potentially be educated concerning their views and attitudes towards women, whilst the other is a predator who is to a greater or lesser extent hardwired to sexually assault women; for any number of reasons.

Rapists, will often try to identify themselves not as predators, but as those who believed they were engaged in acts of consensual sex, and unfortunately, many people believe them -because they don’t distinguish between the motivations of a predator, and the forceful, demanding, and entitled behaviors/actions of those looking to negotiate and engage in consensual sex. The “men just need to stop raping women” argument, needs to be re-labelled to, “men need to stop pressurizing and bullying women who don’t want to have sex with them, into having sex with them” and this should be coupled with the advice that women should be trained in how to identify men who are sexual predators. Society has a role to play in educating men on how to “negotiate” consensual sex, and the individual has a role to play in learning how to predict, identify, avoid and deal with sexual predators.

One of the reasons I believe that misogynistic behaviors and actions towards women have been linked and tied up with rape and sexual assault, is because this type of attitude and treatment of women, lacks a term/definition. I have always referred to it as “Sexual Aggression”, and I believe that many universities and colleges in the US don’t actually have a “Rape Culture” but instead a “Sexually Aggressive” one, and it is this that needs to be distinguished and addressed. Brock Turner tried to hide behind this culture argument and used it to explain, excuse and discount his actions. He tried to argue that rape and sexual assaults are caused by alcohol and drugs, and the sexually aggressive culture on university campuses, rather than on a predatory personality, and the judge at his trial bought this argument. One of the great dangers behind the “men just need to stop raping women” argument, is the belief that it is a lack of education, which causes men to rape, and that if this sexually aggressive culture could be addressed, there would be fewer rapes. Brock Turner knew that what he did was wrong. The fact that he tried to argue that his unconscious victim had in fact consented, demonstrated that he knew that sex with a non-consenting partner was wrong – and he knew this, regardless of the amount of alcohol he’d consumed.

Sexually aggressive individuals may become angry and antagonistic when a woman refuses their advances, or won’t acquiesce to their requests. They may also vent their frustrations in other ways, such as trying to humiliate and embarrass the woman they were trying to convince to sleep with them, however this is because they are unable to get consent. They may keep bullying and pressuring, but these actions and behaviors are designed to force a change of mind, and this is where the motivations behind them differ from that of rapists and sexual predators, who aren’t looking for consent. These individuals are not primarily motivated by sex, but by other, darker urges. Unfortunately, education and a change in “culture” won’t stop them; appropriate personal safety training, and self-defense can. If we can accept that rape is a premeditated crime, born out of masturbatory fantasy, and committed by predatory individuals, and not a product of a culture, sentencing will be fairer, and victims much more likely to come forward and identify their assailants, without the risk of judgment. If we continue to argue that rapists first seek consensual sex, and only when that fails, and as a last resort engage in non-consensual sex, we start to bring into question how the victim behaved and acted in the situation, and that is doing them the greatest of disservices.