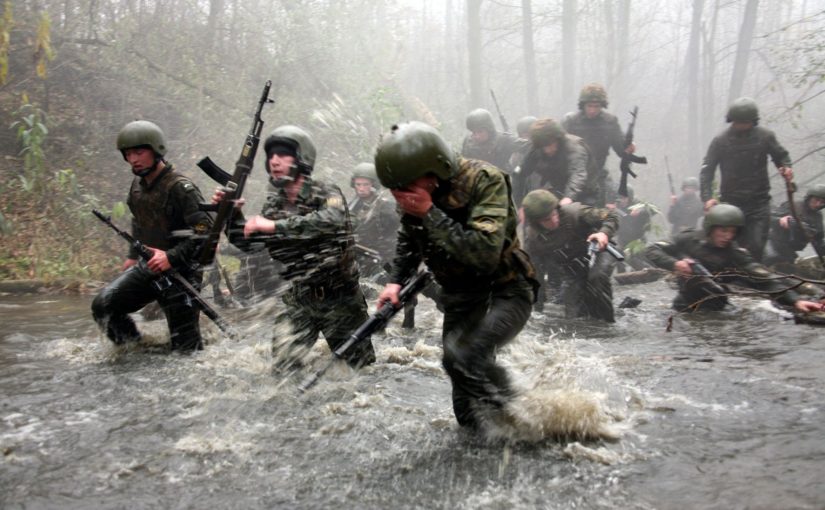 Russian Spetsnaz: “I request an airstrike to my location!”

Who can defeat a suicider? When you fight you usually don’t plan a heroic death, you think about a win, right? Even if you are a counter-terroristic squad member you think about a successful completion of an operation, and about your family who waits for you at home. You want to stay healthy and alive, and death is not a desirable variant. But when you are a suicider, then you don’t care whether your body will be damaged or destroyed. You can let your enemy to break your hand, but to bite his throat. Or even let him to stab you with a knife thus coming closer to his throat again. Does that mean these suicidal terrorists are undefeatable?

No. For example, Alexey Prokhorenko, died a hero after requesting airstrikes to his own location, when he was surrounded by terrorists in Syria. This incident was widely discussed by media. The Russian officer claimed to be a member of famous Russian Spetsnaz (Elite Special Forces). Was that deed a unique thing? Or maybe a result of Spetsnaz training? Let’s get deeper into the Russian history and Russian Elite Forces training. Officially Russian Spetsnaz was established in 1950 and was included into the mysterious GRU (Main Intelligence Directorate of the Russian General Staff), but technically the special squads of scouts and raiders existed long before that date. They could have different names, but their structure and training were similar (and the differences were dictated by the tasks). Say, Elite Forced of the Soviet VDV (Airborne Forces) would prepare a ground for landing by “cleaning” it, when the GRU Spetsnaz would make a raid or do reconnaissance.

Anyway the main structure of the training was the same (besides experimental groups). It based on the common army NFP (Physical Training Regulation), but any commander could also include his own practices and techniques, sometimes extreme. One of such methods will be discussed in this article.
Main parameters of the NFP-2016:
– Individual Training
– Gymnastics and Acrobatics
– Hand-to-hand Fighting
– Obstacle Zone (Conditioning Course)
– Running and Athletics
– Skiing
– Military Applied Swimming
– Sports Games
The NFP uses point rating system depending on age and other candidate parameters. However we can give an approximate average acceptance test as an example of specific figures.

All exercises are performed without a pause.

Mostly education consisted of two things: running and shooting. As the Soviet Army saying goes, You must shoot like a cowboy and run like his horse. Of course the soldiers would run with full backpacks. The hand-to-hand fighting was not a main part of the training program. Still the program was so packed that those people were actually undefeatable later in their street conflicts, and some of those masters skills seemed to be fantastic until you saw with your own eyes.

No wonder – only a gifted person with a sports background could be called to Spetsnaz. Plus it should be a smart, intelligent person. Somebody who is a good boxer and a chess player at the same time. Have you met many of them in your life? We also should mention that training supposed to strengthen the morale spirit of soldiers which is the core, the main thing to win.

So, stamina was first and most of these guys didn’t look like Schwarzenegger (or even Rambo). Especially if such a person was also a spy – a regular man needed, who was not easy to notice in a crowd, who didn’t look suspicious. Tall guys were usually selected to “storm troopers” squads when you didn’t need to hide. And a “Conan the Barbarian” cannot run for hours with munitions and weapons on his back. However, it depended on a situation. As one of the Spetsnaz leaders said, The main weapons of Spetsnaz are intelligence and will. So if you would see some of the legendary Russian Elite Forces members on a street you would never recognize them. They don’t want to look like commandoes, they want to be considered real professionals – and they are. One of the training main parts is obstacle zone (conditioning course). We all know how usual military obstacle zones look like (standard one is of 200 meters long according to the NFP). Usually a prepared soldier can go through it in seconds (especially if attractive girls from magazines make pictures of him). Unlike it the Spetsnaz obstacle zones are longer and more difficult. The distance can be much longer than a kilometer and it takes more than an hour to go through it. Remember, we talk about prepared people who train every day, so a civilian person would finish it in a day or more (if would).

One of the GRU obstacle zone’s length was more 15 kilometers with depressions, elevations, wooded areas (with windbreak), water areas and a lot of engineering structures. Two battalions of soldiers (approx. 700 men) and students of the officers school (approx. 50 men) could train there by weeks without even noticing each other.

Now we will know about an extreme training method which was not an common obligatory thing (it depended on a commander again):

– Naked soldier enters the little room where a rat is waiting for him. A rat driven into a corner is a dangerous thing. A soldier should kill it with bare hands.
– A soldier should eat a frog alive.
– A soldier is put into a coffin with common water snakes (they are not poisonous) for a couple of hours
– A soldier is throttled with a plastic bag after a sparring – of course not to death.

The main education principle is simple as you can see – training should be at least as hard as real situation (of preferably even harder).

Is that the reason for Russian soldiers to die non captured, to direct airstrikes to their own locations? No. The ability to die at war is the common and popular Russian tradition which is described in many films and books. It was used for centuries, and is used nowadays. As the saying goes, Russians don’t give up. Unlike terrorists Russians want to live, but a heroic death (self-sacrifice) is very honored in the Russian tradition. It is difficult to say when this tradition appeared, but it is ancient enough. Maybe it appeared simultaneously with Russia itself. Maybe this is the part of the Orthodox Tradition: “Greater love hath no man than this, that a man lay down his life for his friends” (John 15:13), King James Bible.

https://youtu.be/PREPGQLhrdI
VDV (Airborne Forces) – their main tasks are air assault, liquidation of enemies, gaining a beachhead
The soldiers in these films are not from Spetsnaz, still you can learn something about the Soviet training.