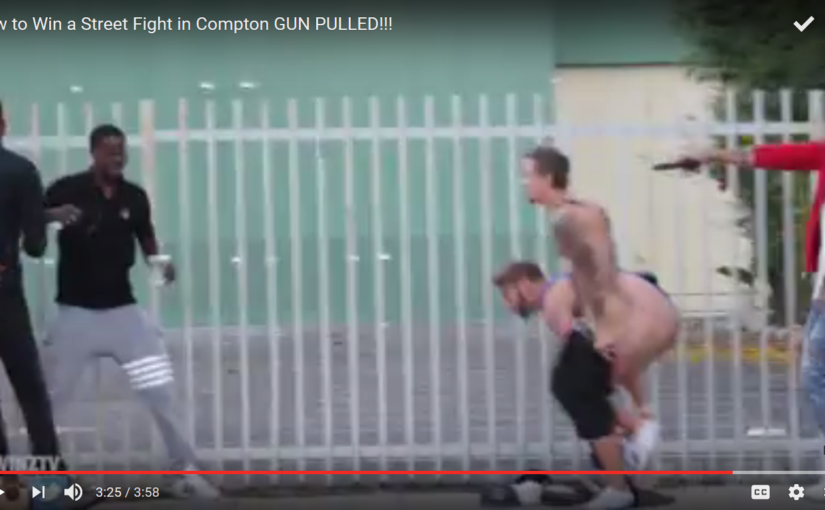 Street prank videos – What they can teach us about conditioned response, context and situational awareness.

At first glance prank videos are mindless entertainment; taking advantage of the element of surprise and have little value or interest to people interested in self-defence or street awareness and conflict-survival. Like many people, I find some of them funny, and some I find cross a line making me wonder “ How did these people not get knocked out for doing it?

Recently after Escrima class, my Instructor (Charlie Warren @ Urban Escrima) and I were discussing how physical training is only part of the self-defence puzzle; Regardless of if you have spent years perfecting a technique in the dojo or bench-pressing in the gym, you can’t rely on this alone, nor on the assumption that people will react the way you expect them too. Environmental awareness and consideration of unexpected factors are just as important.

This is where prank videos can be a useful tool in the self-defense practitioner’s repertoire by critically assessing the behaviour and reactions of both the prankster and the victim during an unexpected interference in public. Most conflicts we experience in ’the street’ begin either by ambush or by escalation from a minor unexpected interruption, which one party having intent and the other wondering what is happening. This is where the prankster and the attacker share a starting point and mindset.

In this piece we are going to look at four videos, from low risk through to high risk pranks, with the final video leading to a massive escalation in reactions which could have ended in a fatality.

In this first light-hearted video the pranksters film unsuspecting people using the public showers on a beach, constantly adding more shower gel until the victim realises something is wrong.

Each victim is targeted at their most vulnerable, when their ability to see and respond to a threat is reduced. Luckily for the pranksters only one lashed out blindly, nor did any passers by decide to intervene. It is up to use to decide if this was lack of awareness, lack of public spirit or that people saw it as a harmless prank. We see that the last victim panic and run off, believing he is bleeding. Imagine the scenario if what could have happened next if someone passing by him was mistaken for the prankster, or if the pranksters had been caught mid-act by him. Here a lack of consideration for others could have lead to this prank ending in court or the hospital.

The second and third videos show the importance of context and how it affects responses, and response time; The prankster pulls out boxing gloves and challenges random people to a fight. In one he is dressed as Santa, in the other he is dressed in boxing gear. While dressed as Santa most people instantly work out it’s a bit of a joke and there is no risk of harm. Without the Santa suit, people take longer to drop their mental guard and in the final situation, take their response to a higher level than the prankster was prepared for. Again the pranksters were lucky that no-one walking by decided to get involved or escalate. Again we see the pranksters relying on the public perceiving the gloves as an indicator that its not serious, instead of it being an attack by someone wanting to cause harm.

In this final video the pranksters deliberately target people they think will be up for a fight in the street, goad them into escalating to a physical fight and then use a disruption technique to stop the fight from happening. Each time just as the fight is ‘on’ they strip to a mankini, and the shock of this causes confusion triggering he ‘fight or flight’ response.

This video can teach us a lot ; The pranksters were relying on their previous experiences to survive the confrontations, and were totally unprepared for the final victim response.

The first 2 minutes of the video is interesting to test yourself to read the body language of the victims and see when they decide that the fight is ‘on’. Some of the victims take a while to comprehend what is happening, then give the pranksters verbal fences, physical fences and finally prepare to square off. Others go straight to squaring off.

At 2:27 the prank becomes more of an interesting study in pre-fight ; The victim first looks around and attempts to diffuse the situation with laughter, then resorted to verbal and physical fence to distance himself from the aggressor. His body tenses up and he becomes more focussed on the threat. When his boundry is crossed a second time he uses a more forceful push as a last resort readying himself to fight.

At 3:07 The pranksters reliance on previous ‘wins’ makes them take a risk too far and they challenge a gang of five guys. The guys at the back are laughing and aware that 2 vs 5 is not good odds, and don’t take it seriously. At 3:17 you see the guy in red move leave the group and his buddies at the back go from laughing to ‘ready’. The pranksters are so used to this prank ‘working’ that they haven’t considered what could go wrong, and do not pay any attention to the guy in red moving away and circling behind them.

Oblivious to the changes in behaviour around them or the red hooded guy drawing a firearm, the pranksters continue to goad the group of guys into getting physical, and they whip off their pants to reveal the mankini. Only after the video crew join them do the pranksters even realise that they had a gun pointed at the back of their heads.

So what lessons can self-defence practitioners learn from these prank videos?

Here are a few to start it off:

People are unpredictable when you threaten their self-image.