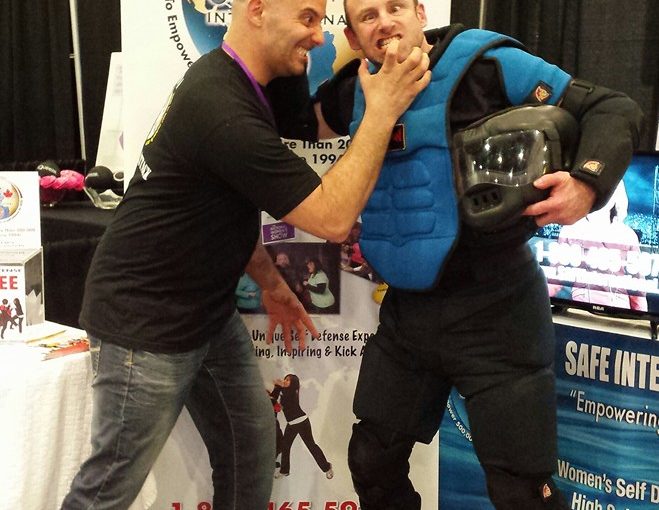 Immediately one might think there is no room for humour in self defense.  Self defense is meant to address violence that may result in harm; physically, emotionally, and psychologically.  How can humour be part of that you might ask?  Well, you’d be correct in thinking there is nothing funny or entertaining about violence. However, in order to teach people how to address potential violence, one should consider the methodology. Enlightening people that humour has a part to play may be one of the missing links, in my opinion.  Fear is an often-used strategy to show and motivate people to address violence, but it is not the only strategy.  There are so many variables in any self defense scenario, with so many variables in the personalities of the people we teach.

While sharing and providing some of the realities of violence to people may create an atmosphere of fear, which can motivate to some extent, I believe that fear has its limits and must be part of the formula, but not be the only strategy.  For me, the use of humour has not only been an integral part of our teaching methodology, but a cornerstone of all SAFE self defense courses.

I began SAFE International in 1994 and right from the start I utilized humour in my teaching.  Did I do it on purpose, knowing it would be so important and instrumental in reaching our clients?  Not at all, it was more just who I was, how I liked to be taught, and the way I liked to instruct.  Immediately it seemed to work with the teenage girls we were teaching.  There is no tougher crowd in my opinion than young teenage girls, they will tune you out in a second if they become bored!  In fact, many of the girls on our “Talk Day” (an awareness component whereby everyone shares their personal experiences, no hands-on physical techniques) would ask if we had to talk, wanting instead to start hitting someone rather than being stuck in a classroom talking about safety scenarios.  What I found instantly is, through humour, we kept their attention and although they were laughing, we were still discussing some very important topics in regards to their personal safety.

But even with this approach appearing to be the right one, I still had doubts making the topic fun when teaching about sexual assault, abuse, and violence.  Then one day I received the confirmation I needed.  I was instructing a group of grade 9 girls, who would be about 14-15 years of age, and the teacher asked me if I would mind a woman sitting in to listen, and I happily obliged.  Turned out, she was the director of a sexual assault centre for women in the community.  The talk went as well as I had become accustomed to, and after the session the woman asked me if she could speak to me.  Quite honestly, I was prepared for her to say that my approach was not suitable, in her opinion, for such a serious topic. Well, in fact, it was just the opposite.  She asked if I could come speak to the women at her centre.  I questioned how the humour would go over with them, and she said the use of humour was exactly why she wanted me to speak to them.  I will never forget what she said, which was, “You aren’t making fun of the topic. You are making the topic comfortable to talk about because of the fun atmosphere you create.”   That was about 17 years ago and was all the confirmation I needed to carry forward the methodology we use in teaching.

Sadly, many of the women I have taught over the last 20 years have shared some very horrific stories of violence with me. Without exception however, they have told me they felt comfortable sharing many of those horrific details because they felt at ease in doing so due to the safe environment created, with the main reason being the use of humour.  Now, I do not want people to think that the discussions are all shits and giggles.  Often there are many tears shared, but the humour is what gets us to those special moments.  I like to teach like a roller coaster, moving up and down between seriousness and humour at the proper times.  Sandwiching in the important points between the laughter is very effective.

Another area where humour has proven to be very effective is in getting people to remember what we have taught them.  I believe people are much more likely to remember what they have learned if they are engaged in the conversation in a way that is pleasant and fun.  Yes, again fear can motivate, but which would you rather experience if you could still reach the same goals? I like to try and find a balance using whatever methodology people seem to benefit most from.

Perhaps one of the most dramatic examples I can share, regarding humour being an effective way to recall information, took place many years ago.   I received a call from a teacher who told me that I had taught her daughter and her daughter’s friend when they were in Grade 9.  They were now out of high school, it was approximately 5 years later.  Both girls were at a mall in Ottawa, Ontario.  It was roughly 3pm and the girls proceeded to their vehicle which was in the mall parking lot.  The daughter of this teacher got into the driver’s side of the car while her friend was getting in the passenger side.  As the friend opened the door, a man appeared out of nowhere seemingly with a knife to her throat, standing behind her.  He demanded she get in the van or he would harm her.  The girl on the driver’s side immediately began honking the car horn and screaming.  The attacker instantly fled the scene and both girls were fortunately okay.  They found out the next day after reporting it to the police that the man had left them and gone to another mall nearby within the hour.  He saw a woman putting her child in the back seat of her car.  He began to force them in the back, threatening the mother with the same knife.  In the meantime, a few men had noticed what was happening and took chase.  The attacker fled when he saw them approaching.  They eventually caught the man and restrained him until the police arrived.  The earlier two young women who also escaped had called the police.  The police interviewed the women separately and got very similar descriptions.   The police informed the women, after they both identified him from pictures, that he had previously spent time in jail for sexual assault and was just recently released.  The police also told them that they had handled the scenario very well.

Now, the mother/teacher of the one girl who called to share this story with me informed me that when she asked her daughter why she honked the horn and attracted attention, was told she had remembered this tip from my safety talk back when she was in grade 9, five years previous.  Her mother was impressed with this memory retention and asked her daughter how she remembered this in such a scary situation.  Her daughter said all she could think of was how crazy I was when I taught her, and that thankfully, somehow she remembered my advice when she needed it most.  Now, I do not share this with you to try and take any credit for their successful escape.  Many self defense instructors believe they deserve the credit if a student is successful. I don’t, just as I am not prepared to take the blame if something did not work.  I just want to demonstrate the power of humour and how, in even the most adrenaline-driven, frightening scenarios, humour may be what allows a person to remember what they were taught.  Can I explain all the details on the human brain and how we learn and remember with the use of humour? No, I just use it as a tool and as long as I continue to receive feedback validating that it works, I will continue to have it as part of my teaching toolbox.