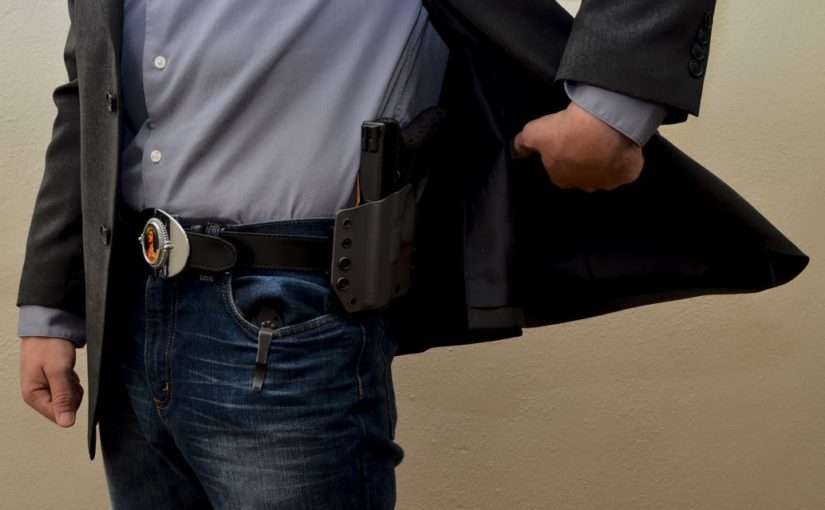 Weapon retention is described as protecting, while carrying, any weapon such as a firearm or knife from someone that willfully attempts to take it by force from you. For law enforcement it’s a course taught for keeping in your possession your firearm in or out of your holster.

Over the years firearms and holsters have changed dramatically. Up until recently holsters merely secured a firearm only via a button, a piece of leather or with nothing at all. So with this understanding early weapon retention training had to be purely preventative and defensive only, for example, by placing both of your hands on your firearm and holster to keep it in your possession when grabbed by an attacker. Even with today’s high-tech secure holsters this method is still being taught.

In 2007 a new larger regional Police Academy was being created in my hometown. The Captain in charge of this project realized that an upgrade of the Defensive Tactics course was needed. Since the Department was changing their choice of firearm and holster, a new weapon retention course would be needed. I was given the task for the new course. At the time I was teaching a patrol and a traffic unit, so I teamed up with the head of the patrol unit. He’d acquired the new firearm and holster, as both were not issued yet.

The new retention course would be taught when the new equipment was issued at the academy and during ‘in-service’ classes. I looked over the existing course and knew that we’d have to start over from scratch. Since the new holster was very secure, we’d all agreed to create a more offensive-minded course.

I worked on a simple, but very effective technique to defend against having the weapon being grabbed, from every angle and while in the holster or out of the new holster. It was very well received; the officers responded well and liked the new concept. I am very proud to say that an officer who’d just completed the in-service retention class had had a firearm drawn on him, and he was able to use one of the techniques to disarm his assailant.

As a result of this one incident, other doors were opened for me at the department. I began retooling the Defensive Tactics curriculum as well. Working with patrol, traffic, and S.W.A.T. units and even helping officers with testifying in court cases, but I’ll save that for another article.

Unless you’re in a state that allows open-carry, most likely you won’t be using a retention holster. Carrying your weapon concealed is to your advantage. No one should know you are carrying. Using, drawing or showing your firearm is the last thing you want to do. Always be on your best behavior, follow all the laws of your state, do your homework, research your state laws. Be aware too that even county laws in your state can be different.

Having the right and ability to carry concealed firearms comes with immense responsibilities. You will be expected to know the law, to understand the circumstances where you may be breaking the law – i.e. by carrying your weapon into certain buildings: government agencies, institutions of higher education, or onto school grounds as a few examples. You have the responsibility of knowing your weapon intimately. You should train on and off the range. You should learn empty-hand skills as well, especially since you don’t have a secure retention holster.

Your offensive response has to be more aggressive, quicker and more precise. I also teach how to use your firearm as a punching, pushing, cutting and locking weapon. You may need to make space, or where you weapon is jammed or even empty. “Cover all your bases” as we say in the United States. Think out of the box and above all be creative. There’s nothing wrong with carrying a knife as back up, especially in a grappling situation. And again: research the laws, and get proper training.

Most officers during their careers never draw their weapon. So, most likely you never will as well. But that doesn’t mean you shouldn’t be prepared in every aspect.

If you do draw your weapon, you’d better have a very good reason to do so. We had an incident in Florida where a civilian shot a man that was attacking a police officer. He was told by the officer to do so. After the fact the civilian dropped his weapon and backed away. Exactly what you are supposed to do with other officers arriving on the scene.

In an active shooter situation, you may be the only one that can stop the mass shooting. Remember the proper procedure afterward: Police will come in fast; don’t be mistaken as the killer. Obey their commands to the letter. Today, most likely, everything will be caught on video, so your actions will be studied and analyzed.

In my hometown we have a very large mall. As we all should know by now they are magnets for crime, gangs etc.… I knew most of the officers working overtime at the mall, and I was told to never come there unarmed, because they just can’t be everywhere, and that the mall’s security would be useless.

It’s sad but that’s the world we live in today. As a civilian or as a police officer, carrying a firearm imposes an immense responsibility on you. Remember your basic rules: always treat a firearm as if it is loaded, never point it in an unsafe direction unless you plan on firing, always keep your finger off the trigger until and unless you plan of firing your weapon, know your target and what’s behind it.

Dan Donzella has been teaching numerous Martial Arts systems and creating curriculums designed for law enforcement for over 40 years.