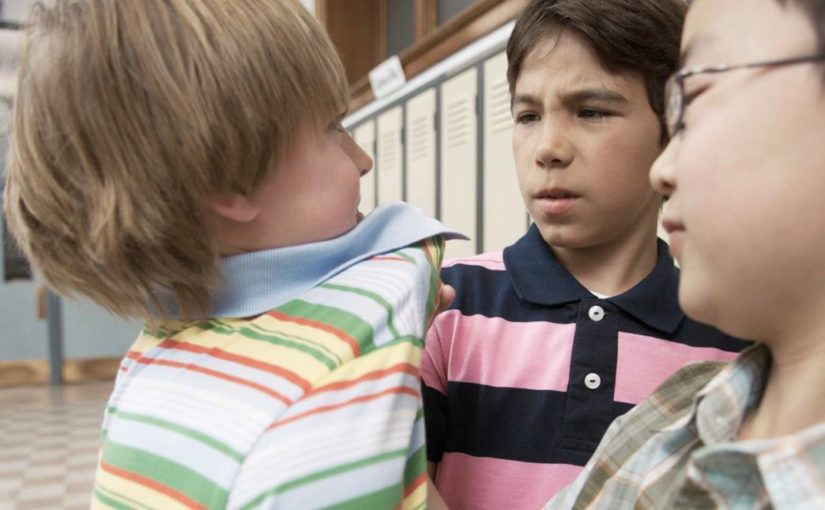 Our job as parents is to prepare our kids to deal with the real world when we are not around.  And a big part of that is conflict management.

As adults, what is it that legally defines our actions as self-defense?  Each city has its own laws, but the gold standard has been that we didn’t have the option to walk away, and our only recourse against bodily injury or death was for us to use violence too.

Why can’t we use this model for our kids too?  I have.  Furthermore, I have emphasized to my son that articulation is a key component in this.  He must be able to explain that he didn’t have the option to just walk away.

This model actually prepares him for the real world.  Telling kids to “just tell the teacher” is useless.  Tell the teacher, after the fact, that he was pummeled?  And what about the zero-tolerance policies that many schools have implemented, in which the bullied kid is twice the victim.  First he gets beat up.  Then the school suspends or expels him for getting beat up.  Or what about the parents that take their kids to a martial arts school, but still don’t teach their kids that violence has legal consequences?

My son is autistic and as a result has a speech delay that has drawn some bullies. His mother and I have opposing philosophies when it comes to dealing with bullies.  She drilled into him that he was not supposed to fight in school.  And if anyone bothered him, the only thing he was allowed to do was “tell the teacher”.  My son did as his mother instructed when a bully was hitting him, and as a result, my son was limping for a week.

Sure enough, next time a bully hit my son, my son hit back. The school attempted to punish my son, but I made an appointment to speak with the school principal.  I told the principal: “You are not out there in the yard to protect my son, the teacher is not out there to protect my son.  I have told my son to walk away from verbal taunts and insults.  But when it comes to physical violence, it is important that he defend himself and prevent injury.  Now you want to punish my son?  That is not acceptable.  What you need to do is keep that bully away from my son, for the bully’s own protection.”

In other words, bullying is not something your children should fight alone.  Parents need to be informed and involved.  Parents are the only real advocates that kids have.

I have read too many news stories of some kid committing suicide due to bullying.  And my questions have always been: “Where are the parents?  Why didn’t they stop this?”

Kids can be cruel.  Kids taunt and insult each other all the time.  Kids make fun of each other. Parents have the power to inoculate their kids so that taunts and insults don’t make our kids bleed to death from superficial wounds.

I know that a lot of people will think I am a horrible parent for doing this, but I actually had my son watch the first 20 minutes of Full Metal Jacket in which Gunnery Sergeant Hartman verbally decimates the privates.  I asked my son, “Do you see them crying or getting physically hurt because of the insults?”  Of course not.  They are just words.

Words can’t hurt you if you don’t allow them too.  But physical violence can leave permanent damage.  So you better be able to defend yourself.  And you better have a good reason to defend yourself.  Because defending yourself is only half the battle.  If you don’t want to get into trouble in school, and if you don’t want to end up in prison as an adult, you better be able to articulate that you had no choice but to defend yourself.  And I also told my son that every fight has the potential to lead to death.  I told him about a news story in which two 5th grade girls got into a fight, and one of them died due to the head injuries she sustained.  (here is a link to that story http://www.nydailynews.com/news/national/11-year-old-girl-joanna-ramos-dies-fight-grader-boy-article-1.1028760)

Then there are parents that will just pull kids out of a school and transfer them from school to school or home school them.  That is running away from the problem.  How is that kid going to deal with conflict in the workplace when he/ she grows up? It is the awkward kids that get targeted.  Rather than shielding such kids and hiding them, parents need to teach them how to socialize.  Yes, I said it, teaching kids to be social is a self-defense life skill.

In Spanish there is a phrase that says: “El valiente vive hasta que el cobarde quiere.”  I won’t attempt an exact translation, but for the purposes of this article, I will loosely translate it as: A bully lives only so long as the coward allows it.

People treat us the way we condition them to treat us.  We set the boundaries.  That is why thugs will do an interview and test a person’s boundaries before they strike.  Teaching kids to deal with bullies, set boundaries, and be cognizant that violence has serious consequences are things we cannot afford to fail to teach our children.