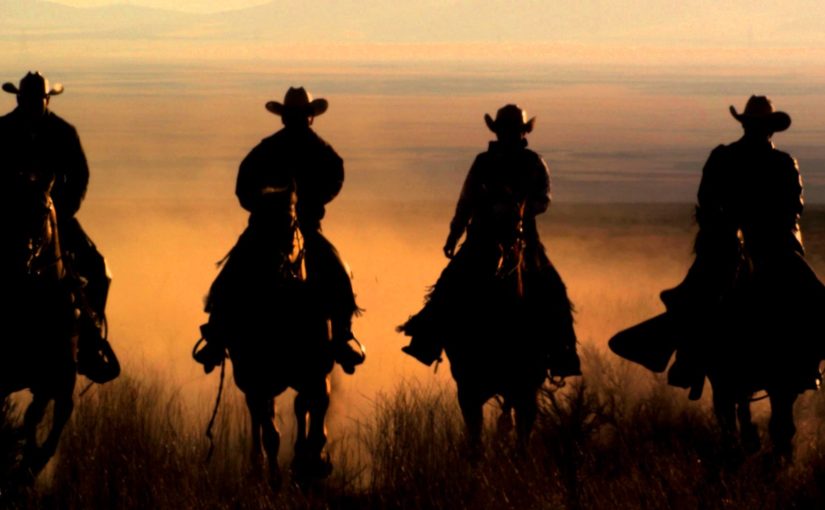 As a child I was raised by cowboys and brought up the cowboy way, I don’t mean cowboys as in builders but as in the ones who ride horses, herd cattle and fight injuns (native Americans, first generation peoples).I gotta tell ya it was tough but it made a man of me. Being brought up as a young cowboy taught me a lot that would stand me in good stead through the years and saved my sorry ass on more than one occasion. Cowboys are tough with a work ethic second to none. They work hard and party harder, they live basic but meaningful lives close to nature and to one another forging friendships that endure over lifetimes. It’s also a dangerous life, working with unpredictable animals in harsh conditions and extreme environments, scorching summers and freezing winters not to mention bears and rattle snakes, and all this on bad food , low wages and scarce female company (no mention of Brokeback Mountain please) So whilst not a glamorous lifestyle there are compensations and you just can’t beat a sing song around the old camp fire with a mess of beans, a slug of whiskey under a starry night sky with your fellow cowboys after a long day in the saddle…….is that a wolf howling in the distance….or those pesky injuns ?

Ah the golden age of cowboy movies, you see I wasn’t as you probably already know, brought up by cowboys, at least not directly. Let me explain. My father was sailor and away for long periods of time (years) so as a young boy I was bereft of male guidance and searching for a male role model, searching that is until we acquired our first black and white TV and the Lone Ranger (and Tonto) appeared on our screen, I was hooked and a cowboy from that day onwards. Now I understand it’s a generational thing so when I talk cowboys I don’t mean the anti hero Eastwood type or God forbid Brokeback Moutain, I mean real cowboys , Gary Cooper, Jimmy Stewart, Alan Ladd, Henry Fonda and of course the cowboys cowboy John Wayne. Now I can picture you reading this and thinking WTF where is this going, but bear with me and I will get to the point!

The point is information can be gleaned, interpreted and adopted from almost any source, even cowboy movies if you have an open mind. So what did I learn from cowboy movies you may ask?

Well the first thing I learned and understood was that there were good cowboys and bad cowboys, good cowboys were handsome and wore white hats whilst bad cowboys were ugly and wore black hats, both sets have lived by an unwritten code, one good , one bad , the clash of codes obviously became the movies story line. Now as I grew older I started o understand the good cowboy code and adopt certain values and attitudes such as calling my parents Ma and Pa and eating more baked beans than was good for my intestinal tract not to say the atmospheric conditions within the ol’ homestead

I also started to understand that good manners were central to the cowboy code especially regarding women and children as was kindness to animals and the weak and the vulnerable, and most important that violence was always a last resort after the hero has been pushed too far and with no other choice, hence the big shootout showdown in the final scenes which despite being wounded the good cowboy always wins and kills the bad cowboy or at least runs him out of town.

You see the point of this article thus far is, you gotta have a code, a personal code that articulates your values and guiding principles to life, see if you don’t know what you stand for you will fall for anything. What will you fight for? because someone spilt your beer or looked at you the wrong way? (Bad cowboy code) or will you walk away with your honour and integrity intact because you were true to your code. Any damn fool can get into a fight it takes a man of character to walk away if he can, especially when he knows he can whup the other guy. Only when there is no option other than to fight, well that’s when the metaphorical six guns come out of their holsters. OK I gotta rodeo to git to so take care.