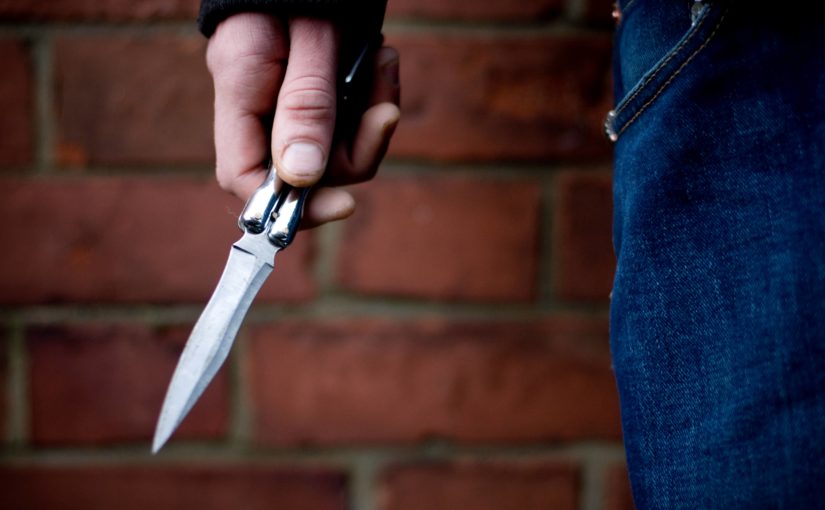 Robbery, although wounds or killing are not common (unless the victim attempts to resist) this can be best understood as a ‘stalled attack.’ Violence routinely comes with instructions how to avoid it. These instructions tend to occur before a physical attack is initiated. With muggings this order is reversed. Basically using deception to cover the significance of his actions, the criminal sets up the range and positioning for an attack, starts the attack, and then stops before it lands. What was an attack stops and is followed by instructions how to keep the attack from finishing (e.g., give me your wallet). If the person resists, the completion of the attack often follows. While a single slash as punishment is common to the face, neck, upper chest and arms. Depending on the degree of resistance by the victim depends on the amount of injury.

Message blade use is common among criminals and certain ethnic groups. It is sometimes fatal (e.g., decapitation) sometimes not (i.e., nostril slitting, cutting off ears and nipples). The use of a blade is very deliberate in order to send a message to others, often through sheer savagery. For example the individual is not just killed with a blade, but hacked apart for intimidation. Especially in situations where more effective weapons are available, the use of a knife sends a clear message about crossing or betraying certain groups. Whereas deliberate but non-fatal maiming (i.e. nostril slitting, cutting off ears or fingers) combine sending a message to others about crossing a group, a lesson for the maimed person, and also demonstrates contempt for the individual left alive (i.e., you/your group are not strong enough to stand up to me/my group).

Brandishing/Menacing is fundamentally a threat display, negotiation tactic— that also happens to be illegal. A distinguishing difference between this and robbery (or kidnapping) is brandishing usually occurs in the middle of an altercation. There is usually conflict, build up and instructions to avoid before the weapon is drawn and displayed. This is repeated when the blade is drawn.

Like other kinds of threat display, brandishing can be based in either ‘do what I want or I will hurt you’ or  ‘I’m too dangerous to attack.’ While either type can result in the blade being used, both require closing distance. If the draw and deployment occurred outside of knife range, somebody has to move into range for there to be wounding.

A fifth option is the knife is drawn and deployed with intent to brandish, but is done inside attack range. Due to ‘compression’ and proximity, this attempt to ‘scare someone away’ often backfires in various ways. In these sorts of situations, the question inevitably comes up: Why didn’t he flee when under threat? Simply stated fleeing is only a realistic option when

1) the range is great enough

2) when the person fleeing is in better physical condition than the potential attacker. Failing either or both criteria, turning one’s back at close range is a high stakes gamble for being attacked from behind.

Defensive uses of blades tend to have four common elements. First, even though only one side typically has a knife, there must be immediate threat of death or grievous bodily injury by the other person’s actions to warrant the blade’s use. More often than not that danger comes from other means than a knife (e.g., clubs, guns, improvised weapons or conditional disparity of force). As stated earlier, knife to knife is exceptionally rare, but that doesn’t mean other dangers don’t exist.

Second, typically, once the threat stops the defender stops his actions. This tends to cause a limited number of wounds as when the initial attacker stops and breaks off, the defensive action stops as well.

Third, except in specific circumstances, wounds are to the front of the attacker (that the knifer was defending against).

Fourth, defensive wounds on the attacker tend to be non-existent or minimal. In essence while attacking, very little attention is paid to defense and arms are not used as shields. Often what could be described as ‘defensive wounds’ line up with other wounds (e.g., a cut to the arm that aligns with a cut to the chest from the same slash).

As a subpoint of #2, defense stops when threat stops, the amount of damage an attacker takes is often dependant on his or her commitment to attack. A committed — usually intoxicated —attacker can often take multiple fatal wounds and continue attacking before being overcome by those wounds. Again, usually on the front.

Fear can be considered a catch all category. It can be viewed as a third subset of brandishing gone wrong, sheer panic, or a defensive action that turns into a frenzy.

Under the combination of fear and adrenaline,  the individual—to use layman’s terms— ‘freaks out’ and starts attacking or leaves defensive action moving into excessive force. This flavor of knife use tends to create yet another pattern of wild, untargeted, multiple wounds. These wound pattern are indistinguishable from a rage or FMA attacks.

Fear knife use is also the basis of someone chasing a person down the street and slashing at the other’s, back, then later claiming ‘self-defense.’  Due to adrenal stress, fear and continued proximity the person honestly — although not reasonably — believes the other person is still a threat.