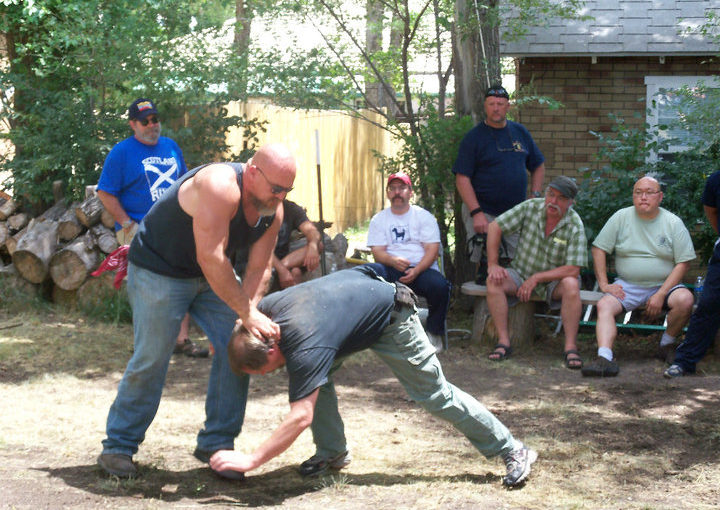 Ok folks, I will make an admission here before all of you and God Himself. I have very little training in the Martial Arts. Matter of fact, I am an eternal white belt. Never had the time or the patience to want to spend in training in a martial arts system. But what I do possess is 27 years of experience in the violence trades. Bouncer, body guard, SOB for hire whatever paid the bills. If you had the money you didn’t need to get mad. I and my associates would get mad for you.

Simple as that. I never understood why someone would spend thousands of dollars and years of their lives training to learn how to kick ass and take names when I always found the best way to learn was by spitting blood or teeth. Lord knows I can only chew on one side of my mouth now and have difficulty breathing through my nose but I did learn some very hard lessons.

What is really getting to me lately is the complete and total disregard for the school of hard knocks. I have friends that have paid their dues in the dojo and are pure hell on wheels when it comes to the martial art of their choice. Men and women both I would never stand up face to face and want to fight. It is much safer just to ambush them with a hammer to the skull from behind than to try and prove that I am the better fighter.

This is not directed at them, but to the complete opposite of them. The twenty –four year old Grandmaster and YouTube hero with a great marketing scheme and sales pitch. I have been going through a bunch of these so called Self-defense sites and for the most part they can make someone like me doubt my skill level. I mean these guys are slick, they choose and use every little trick in the book to get you to buy their programs. The whole what if scenario of can you protect your family if this happens. What would you do if you were accosted in a dark alley at midnight by a group of thug’s hell bent on raping you and taking your wallet?

These guys have it down to a science of manipulating fear and insecurity. But here is the question I want to ask you. Please after reading the question take a moment to think about what it means to you.

What would a virgin be able to teach you about fucking, let alone stunt fucking? I mean come on folks these guys are technical virgins.  And no I don’t mean girls who take it up the ass so they can give their husbands their cherry on their wedding night. I am talking about guys who have never had sex, jacked off a lot, but never really been balls deep in the real stuff.

Sure, they may know all the right moves, but when it comes to implementation they would throw their backs out in the first 20 seconds of some serious porn star sex. The majority of these guys have never been a real bad situation or they damn sure wouldn’t be teaching the crap that looks cool, but is as useful as a broken rubber. Hell, shoving a pen into a guy’s eye or ripping his ear off is a hell of a lot quicker way to end a fight than all of the fancy pants moves you see being taught to a lot of folks as 100% effective every time.

I watch the YouTube videos and think “Boy, that sure looks good, except for the part of when they went to the ground, then bad guy’s backup is going to run over and mule stomp that poor bastards head in, while they are rolling around on the ground.”

Again please do not misunderstand what I am trying to get across to you. I have the highest regards for the Martial Arts, and for people teaching real world applicable self-defense. But there are as many shysters out there teaching fighting as there are preaching the Gospel for cash. Look at what these people are offering. Is it a one day seminar that guarantees that they will make you an invincible fighting god for the cost of a used car? Or is it someone that tells you this shit is complicated, and is going to take you some time and effort to really learn and know what can and will go wrong?

Nothing can completely guarantee your safety. Nothing is 100% effective all the time. Sorry, but it isn’t.  I have shoved my thumb in a guy’s eye to the second joint and the fucker kept on trying to run a knife into my stomach, instead of trying to get off me like I wanted. I have had a drunk bust a chair across my shoulders and it didn’t turn out like he planned.

That’s the real world folks. One of the first things I teach a new bouncer is that Murphy is an optimist. Be ready with a plan C, D, and E, if the first ones don’t go right, because chances are they won’t.  Look folks, I am not in any way an expert in self-defense. But, I am pretty knowledgeable in what it takes to survive in a business that eats people up in less than 10 years.

I can tell from experience that a MMA program or a sports form martial art is useful as a beginning. But, these are duels with rules and regulations. A close quarter’s combat class can be a great way to wind up in court or worse jail because you went to the extreme and killed someone because you were just doing what you were taught by a guy that never went to the limit with anyone in the real world. This shit is a balancing act and you had better be ready for it to all come crashing down around you.

My advice is take the next two years and begin studying all you don’t know about what really happens in situations. Go find a good boxing club and get hit in the face a few times. Read Marc MacYoung, Rory Miller, Lawrence Kane, and Kris Wilder.  Teach yourself to stay out of bad places and use prevention to keep your ass alive.