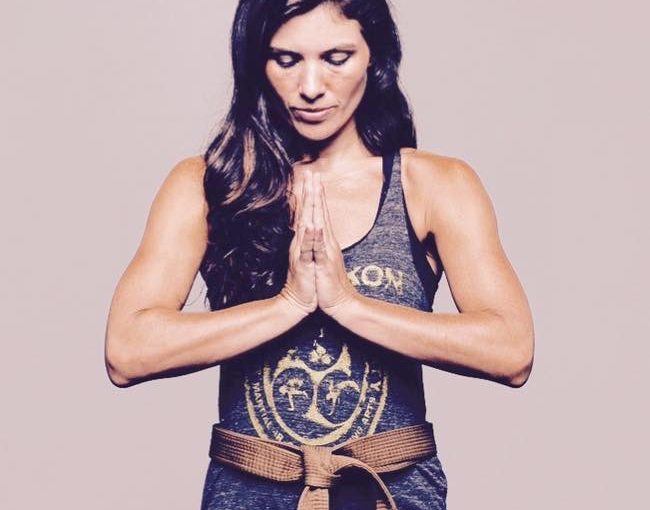 Angela: Yes. I also make sure I am fully responsible for physical safety as well. This is why I am very strict on no one talking when I’m talking, so that everyone can hear the instruction and there is no confusion. I let people know they may get bloody knuckles, from punching a pad bare handed, and if they have a job where that’s not cool, they can use palm heel strikes. I let them know they will be physically uncomfortable, and that’s part of the work, to get their bodies stress inoculated.
But I take the job of keeping them physically safe very seriously.

Erik: It has been my experience (and others) in dealing with the typical demographic of women that come to a self-defense class, the majority are really not interested in engaging in serious physical contact. Using a rough guideline of the 80/20 rule. I find that only twenty percent are willing to push themselves physically, the other eighty percent would rather not.

My solution to this issue has been to focus on primarily boundary setting and use role playing of common scenarios that women encounter in their everyday lives as teaching tools. Invariably, the women have voiced boundary intrusions and violations by men as their primary concern and problem.

Angela: I agree this is one of the most voiced concerns of women who are seeking “Selfdefense”. It’s that in between space, where someone has not physically crossed a line in the sand, but there has been some sort of verbal intrusion or feeling of impending violation. In Fit to Fight, the Self Defense system I train under, they refer to this space as the “fence.” The space in-between, where there is not a clear threat, but you prepare mentally and set yourself up physically to be ready.

I also agree many women are really not interested in serious physical contact, but I think a huge bulk of that trend is female patterns of socialization, which I see as something that needs to be directly addressed and changed. I tell women right away, this is not cardio kickboxing, calorie burning time or, group exercise.

Honestly, I don’t care if women don’t want to push themselves physically (although I think you are correct in the 80/20 rule, but I think the physical push is necessary to access the part of themselves that feels too powerful, violent, aggressive, too uncomfortable. I think it’s necessary for them to feel what they fear, in a safe and supportive environment, otherwise they will never have an opportunity to rise above it. Of course, this is all done by building trust and understating the real distress of trauma. I make sure from the beginning the women know I am a safe leader and yet in the next breath, tell them I’m okay with them not liking me.

Erik: Generally speaking, I have found that younger woman in particular, do not have a real understanding of the concept of deterrence. They confuse deterrence with aggression. They feel that by engaging in tactics such as strong body language, eye contact, assertive phrases, and the like, that they will encourage aggression rather than discourage it.

Much of their behaviors seem to stem from socialization that relies upon using passive body language and indirect communication to deal with conflict. Some examples are excessive smiling, giggling, downcast eyes, ignoring, hunched shoulders, pretending to be looking at her phone, entwined legs, etc. These behaviors seem to be ingrained responses to social conflict particularly in dealing with aggressive men.

It is my belief that these behaviors are habits that arise partly from the fear of engaging in Over-enforcement. Since they fear a backlash from assertiveness and strength, the tend to overshoot in the opposite direction and engage in Under-enforcement. The element that they don’t seem to understand is how Under-enforcement breeds contempt, a lack of respect, and can lead to violations, particularly from predatory individuals.

Enforcement is at the core of boundary setting. It is the willingness to enforce boundaries that creates respect for the boundary. Most of the time this enforcement is not physical, but sometimes it is.

I would like to know if you agree with my general assessment, and if so, where does your training fit in?

Angela: Very well said, and I couldn’t agree more. If there was ONE take away I would want women to get from training with me in Self Defense, it is your statement, “It is the willingness to enforce boundaries that creates respect for the boundary…under-enforcement breeds contempt, a lack of respect, and can lead to violations, particularly from predatory individuals.”

I start an intro Self-defense workshop or series with that in mind, therefore the work we do, will yes, be very physical and tactical…and yet I am looking to ignite the psychological grit and emotional resilience to say, “not today mother fucker”, not just to an attack, but boundary setting in all areas of a woman’s life, especially relationships…and maybe, just maybe, begin to de-socialize, normal female responses when confrontation/ perceived aggression arises: giggling, permagrin, lack of seriousness, apologizing, over nurturing, excuses, and sulky body language.

The themes I see the most are:

1.Apologizing: I find it fascinating how so many women are socialized to apologize their existence away. I encourage students from the beginning to count the number of times they say “sorry” during training. I am a firm believer that awareness is the first step to broader social change and movement.

2. Giggling: I bring awareness to this before we start training, that it will most likely happen and when it does, ask yourself why? Not as a way to judge yourself or others, but again, as an awareness practice. What are common habits when we are uncomfortable and why we do them? I of course do not think there is anything innately wrong with giggling, but if it is a response to uncomfortably, do others take us seriously?

3. Unnecessary Self -Consciousness. It can be very difficult for many women to yell. I have personal experience that I’ve had to overcome, the fear to be “seen”. But through a lot of internal and physical work, I have found voice, drawn boundaries, and become a woman, those on the outside see as “tough” and a “beast.” Many women find it extremely uncomfortable to yell from their guts. A little peep comes out or no sound at all. I think they see a part of themselves they don’t want to admit is there, violence, aggression, power, rage. I love the Marianne Williamson quote and read it often, “Our deepest fear is that we are powerful beyond measure.” I don’t encourage women to go out and pick fights, but I do think it is necessary for boundary setting. I encourage women through physical uncomfortably to “unleash the beast” in a safe, supportive environment, so they can feel the underlying energy of it and know it’s “okay.”

I am so passionate about this work because I can see myself in all of it. My inspiration to competitively fight these days (besides loving it), is because I’m still working through deep ingrained parts of myself that are terrified to be “seen.” Parts of myself that seize up with anxiety if I think everyone will be looking at me, completely vulnerable, exposed, with no guaranteed control of the outcome.