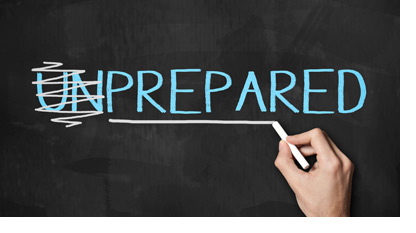 One of my co-instructors for the 8-hour Active Shooter Response course we’ve taught to over 3,000 members of our community likes to describe our brain as a computer. Have you ever been searching for a file on your computer and had the little thing spin and then the message “file not found” appear? Our brain is like that computer, and in an emergency people will often freeze not knowing what to do. Their brain is going “file not found.”

I like this analogy, and that is why I have devised many of my programs around four file folders. The information I teach provides files for those folders so that in an emergency people can find a file. This “file” is a response that can save their life. Rather than staying motionless not knowing what to do, the brain can find a response and hopefully kick start the person into movement. Movement saves lives. In life-threatening situations, often seconds matter. Having a “file” in the folder and knowing what to do can save your life.

There are other components to why we freeze in an emergency, so I’m not saying that just learning a response will prevent that from happening. But that is a topic for another time. In this article, I want to discuss the four different folders of self-defense and what kind of responses you should have in each. These folders are Avoid, Escape, Deny, and Attack Back. The responses you have in these four folders can keep you save and save your life. So, let’s look at what each folder contains.

Avoid. The primarily concept that can keep us safe is awareness and avoidance. These two go together because to be able to avoid a dangerous situation, you must be aware of it. I spend a considerable amount of time teaching situational awareness, and even give a free guide to situational awareness away on my website, because it is so important.

Briefly, situational awareness is being aware of what is around you, what is going on around you, and how your actions are affecting your personal safety. Practice recognizing where the exits are. I don’t like to be anywhere that I don’t know the ways out. Pay attention to what others are doing. If you see or sense something out of the ordinary, your safest option is often just leaving. Get out of the area and avoid the potential danger. Avoid going to places where violence is more apt to happen. Avoid people who engage in behaviors that are more apt to get you into a bad situation. Avoid acting in a manner that will get others upset with you. Some people won’t be rude back, they will punch you, or worse, shoot you for your behavior. Avoiding is always the best way to stay safe. So, stay alert, be aware, and avoid what you can.

Escape. If you have an option to escape to safety, that is almost always the best response to keep yourself safe and alive. In the federal “Run – Hide – Fight” response to an active shooter, this is what the “run” is about. Escaping. I personally like using “escape” better because it may mean jumping out of a window, rather than running. It may mean diving behind cover and crawling to a safe place. If a building catches fire, you must escape the burning building. In a plane crash, you must escape the plane before dying of smoke and fire.

Being aware, which I said was so important, allows you to identify exits, cover, and escape routes. Knowing these will increase the speed in which you can escape to safety and save your life. This is why before every flight, they tell you to look for the nearest exit, which might be behind you. Running away to fight another day is not just a silly kid’s rhyme. Escaping to safety is actually a very wise principle for your personal defense plan.

Deny. This is the “folder” I get asked about the most, but once you understand what it means, you will see how it fits into our overall safety and defense options. Deny represents denying access to anyone who wants to do you harm. In our Active Shooter Response course, we use a “run – lock – fight” model. We changed the federal “hide” to lock because hiding and hoping isn’t a plan, and lock represents what we teach more accurately. We teach people in the “lock” phase to lock doors and barricade entrances. This denies the shooter access and is proven to save lives in active shooter situations.

There are other ways to “deny,” and that is why I use the term in my programs. I use the same terms in my personal active shooter programs as well as safety and self-defense lectures and classes to keep some consistency in the way I teach. For instance, in both my kid’s self-defense/bully classes and my adult safety and self-defense programs I teach a non-aggressive power stance with an affirmative command to keep a person back. This is also called boundary setting. This is essentially denying a person from getting close enough to attack you. Often, this can deescalate a situation and prevent physical violence from happening. It also puts you in position to Attack Back if the person refuses to adhere to your boundaries. Another example would be to put a desk or table between you and an aggressive person to deny them the ability to physically attack you. Holding a chair out in front of you to keep a knife wielding aggressor away is a form of denying, as are other defensive measures to deny an attacker the access or ability to hurt you.

Attack Back. This is what most people identify with “self-defense.” However, I like to define self-defense as keeping yourself from harm, and as we can see from above, there are many things a person can do to keep themselves from being hurt or killed that don’t involve fighting skills. While those options are often preferable, there may be situations where your only options are to attack back or be killed. Dying is not an option in my book, so we attack back. I use the words “attack back” because it provides a more offensive and aggressive mindset than “defending yourself” does. When your only option is to fight, you must be aggressive, ruthless, and do whatever it takes to ensure you survive and go home to your loved ones. If protecting others, you do whatever is necessary for all of you to survive.

After the proper mindset, attacking back includes all the ways you can physically stop another from hurting or killing you. And that includes killing your attacker if that is what it takes to stop them. Methods of attacking back include learning basic empty handed fighting skills such as hammer fists, palm heel strikes, elbow strikes, knee strikes, low kicks, and stomps. Attacking back also includes learning to use lethal and non-lethal weapons such as firearms, knives, batons, canes, and personal defense weapons such as pepper spray, kubotans, tactical pens, flashlights, and so on. One should also know how to use improvised weapons, which include one of my favorites for teachers, fire extinguishers, and anything else you can stop an attacker with. There are times when you have no option other than to attack back, so know this, train for it, and be a survivor.

Conclusion. The amount you put into each of these four folders will depend on your lifestyle and how committed you are to staying safe and being able to defend yourself if needed. And just like that article, tucked into a folder and stashed in the back of the file cabinet forgotten about, won’t help much when you are writing on that topic, if you don’t practice and train with the skills you put into your safety and self-defense folders, they won’t help as much as those who train regularly.

I do believe that having the knowledge with a little training is better than never exposing yourself to these concepts. That is why short classes that include 4-hour classes, one and two day classes, up to week long sessions, still have great benefit to many people. If a lady is walking out to her vehicle and guy grabs her to pull her somewhere, but she remembered to walk with her keys out and starts wildly hammer fisting the guys hand, arm, and face ruthlessly with the key sticking out the bottom of her hammer fist, there’s a good chance he will let go and she will be able to run back inside and call the police. Better yet, if she had been practicing awareness and noticed him ahead of time and asked for someone to escort her to her vehicle, he wouldn’t have attacked in the first place. Obviously, the more practice and training you have, the better you will be able to respond. Stress inoculation and adrenaline producing scenario training will increase your ability to react during an emergency. Buy you don’t need to train like you are in the military, or getting ready for a UFC championship bout, to be able to keep yourself and loved ones safe, and attack back against many common criminals.

Practice awareness and avoid situations when you can. Know the ways out and escape to safety if the option is available to you. Deny those wishing to do you harm access by setting boundaries, using barriers, and locking and barricading them outside when possible. When you have no other option, attack back with everything you have. Be ruthless, be savage, be a survivor.

About the author: Alain Burrese, J.D., is a former Army Sniper, a fifth-degree black belt in Hapkido, and a certified Active Shooter Response instructor. He is the author of 8 books and 11 instructional DVDs, and teaches a common-sense approach to staying safe and defending yourself through his Survive and Defend programs and website. For more information see www.surviveanddefend.com