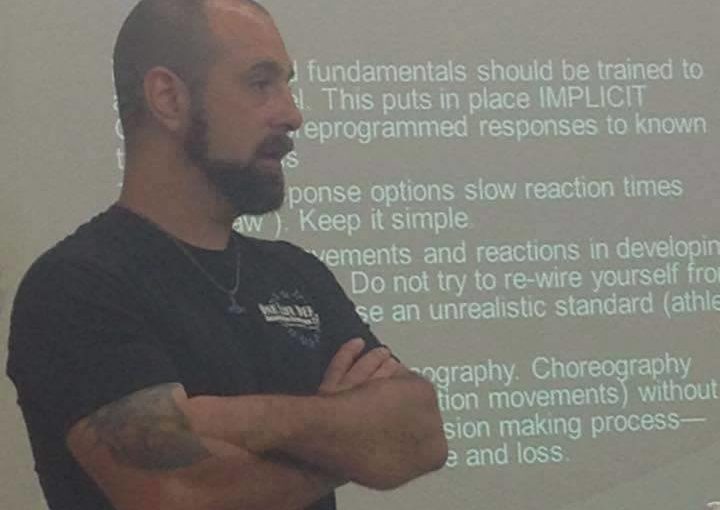 There is a very popular learning model often referred to as the “conscious competence learning matrix” that depicts the stages of learning and competence in skills performance. It is arguable who originated the theory, and there have been several variations since its widespread use beginning in the early 1970’s in the U.S. For our purposes, I will present a general version:

Stage 1 is the hardest one we fight against in the firearms and combatives communities. There is nothing as impenetrable as the belief that simply being exposed to and/or shooting guns or rolling on a mat makes you competent. If you doubt people think this way, go work in a gun store for even a short time. There are a tremendous amount of people who own guns that legitimately believe that an NRA basic pistol course at a gun club is representative of everything that firearms related training has to offer. I would even go further and say that a majority of average gun owners may believe that. The same thing is present in gyms and dojos populated by individuals who have never really engaged in deadly level violence. That belief is definitely an example of unconscious incompetence. Because they are not truly aware of what is out there, they deny it’s importance if you try to explain it. Unconscious incompetence all too often is accompanied by an unwillingness to listen. And, sometimes, there is just not fix for that until it’s simply too late.

Getting yourself or someone else past unconscious incompetence requires, at some point, listening to the possibility of something greater. You must be ready to accept that maybe there is more out there than you are aware of, and that it is very important information that you should know. The first step out of that state of ignorance is the acceptance of the ignorance or lack of capability. I loved one aspect of teaching basic concealed carry courses when I used to do a lot of them, and that was watching unconscious incompetence fail on the range. By safely allowing their belief system to fail, repeatedly, they are left with little argument to continue to embrace it. Learning can occur; if only through failure sometimes, it can occur.

Stage 3 is the where the beginner begins to have some successes in skills performance. A key change here is that the student accepts and embraces the importance of the knowledge and skills. It is very important to note that no one will reliably retain information that they do not deem important (generally speaking). The more important someone deems a skill or piece of information, the higher the chance of them learning, retaining and practicing it. It’s just a fact of adult learning. Therefore, in order to achieve the level of conscious competence, the student must first understand the importance of the skills, and next must practice the skills to be able to perform them.

At this stage, it still requires focus and thought to perform flawlessly. This means that the student is definitely not ready to begin stacking skill demands together, as we refer to advanced training. If it still requires concentration and thought to successfully perform isolated skills well, success will rapidly decline as skill demands become complex and stacked together all at once. The answer here is keep practicing and keep returning to train with someone who can offer positive feedback.

This is where the skills become like what some refer to as “second nature”. For the student/practitioner, this is the goal. If you train the skills properly enough times, you WILL reach a point where you will be able to perform the skills without actively concentrating on the performance of the skill.

When you first learned to drive a car, you probably were not very skillful when it was time to accelerate or stop. I’m pretty sure all of us nearly gave our teacher whiplash the first time we stepped on the brake pedal. Today, I am confident that you probably step on the brake pedal so gracefully that you do it literally hundreds of times a week and do not even notice that you are doing it. That is unconscious competence at work. The skill is ingrained and so well practiced that you can not only perform it without focusing on it, but your brain can actually make the decision to employ the skill without your conscious, active attention to the decision making process.

How did this happen? It was at first the realization that you weren’t that good at it and that you really needed to be. Next, it was the repetition, over and over, just repeating the act until it became smooth. Smooth will become fast. The important point right now is to realize that unconscious competence is the result of proper practice. This is what instructors and teachers mean when they say that the fundamentals should be trained until they become automatic.

I will say it again. It is my belief that the non-conscious performance of an individual can not be taught, bought or gifted. You’ll hear me say this repeatedly: training and conditioning around the fundamental skills will allow technique to naturally develop. This is true. This is why we must move past the “kata” type training and move into conditioning around fundamentals. It is not the perfection of a movement that we seek. No. It is the capability to perform the movement and yet observe, assess, correct and adapt to any changes happening in your environment at the same time. Performing a movement perfectly under predictable conditions is not the pinnacle of accomplishment. Performing a movement correctly and effectively under unpredictable changes in variables and environment while maintaining self-control and the ability to synthesize new incoming information are the true mark of accomplishment in skill level.

There have been several suggestions for a “fifth stage” that is centered around articulation and teaching. It is worth discussing very briefly here. The fact that skills become automatic inherently means that little concentrated thought is put into their performance. It has been argued that it seems impossible to articulate or teach something that you are not consciously making decisions about and performing. This can be true. I have met many people who are awesome at tasks, yet can’t explain how they do it to save their life. If you are going to be a teacher, you need to reach a fifth stage of reflective unconscious competence, and have the ability to analyze your skills and knowledge retroactively.

I would also argue that there needs to be at least a minimum amount of this utilized for self-defense purposes, because post-event articulation is mandatory and may decide your future in very life changing ways. Self-awareness and self-control are the two major components for this fifth stage to happen.