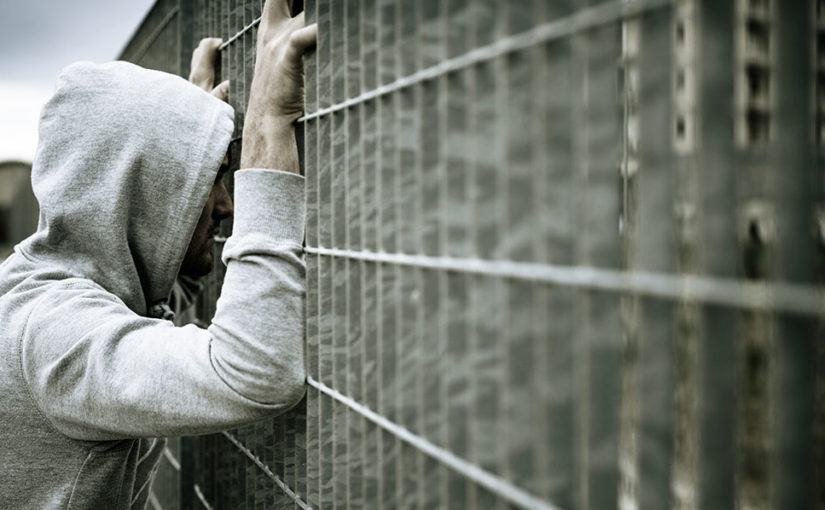 It started like it always had: words exchanged between two parties, all part of rituals of posturing and dominance. The dispute followed the conventional script but ended rather abruptly. Uncharacteristically, the usual aggressor seemed to flare up and, for once, declined to take the conflict to its natural conclusion. This time he had a plan.

He waited. The routine was consistent and well established: we spent the first hours of the day in one location, walked them in lines to use the bathroom, and then brought them to lunch. Despite our need to supervise, policy required us to wait outside the bathrooms. It was at that point that I heard the thumping.

The sound was loud but so muffled that it took me a second to register. By the time I’d decided to ignore protocol and made it through the door, grunts of pain and exertion joined the thumping. The two of them were in the stall, one slamming the other’s head against the wall. He’d sat on the issue for several hours, waiting for an opportunity to get make his move without interference.

He’d set it up perfectly, like a pro, and at only 7 years old.

The assault wasn’t even the issue. Though it’s troubling that one second grader had set up another for a carefully planned and executed beating; factoring in witnesses, transition points, and even rules that prevented us from intervening; the bigger problem is what happened afterward: nothing. The boy had followed through on a premeditated assault and there were no consequences or changes; nothing happened. He’d learned, at an impressionable age, that what he’d done works.

Every day in schools all over the country students, staff, and families have similar experiences. Students use violence against each other or staff members; destroy property; and much, much worse and nothing happens. The problems with this dynamic are numerous and complex but there is one central element that supersedes the rest: the bait and switch that society, through the education system, subjects students to. Students spend as many as many as 12 years being conditioned to believe that the system doesn’t have teeth…until it does.

I’ve spent the past 14 years working in education in a variety of capacities. I’ve been a teacher’s assistant, mentor, tutor, coach, teacher, intervention specialist, contracted guest instructor, and professional development director. I’ve worked with, taught, coached, or mentored at every grade level. I’ve had some incredible experiences throughout, but my time as an elementary school teacher in a predominantly poor, low performing school in one of the worst school districts in the country was probably the most challenging and definitely the most illuminating.

For many kids, their first contact with outside authority arrives in the form of school staff. Teachers, principals, counselors, and coaches form students’ baseline expectations for extrafamilial authority in their formative years. When the school environments condition them to believe that those extrafamilial authority figures had no power to provide real rewards, or real consequences, they learn an extremely dangerous lesson that is repeated, for years, until they encounter other, more emphatic, authority structures like the criminal justice system.

Students as young as kindergarteners went on destructive rampages in school only to be ignored or placated. One young boy walked around destroying everything he could get his little hands on and was given a lollipop for his trouble. It worked…until the next day when he, understandably assuming breaking things was the easiest way to get free candy, shattered a window. He’d learned that most of the time, especially for the students with extreme behaviors, the school couldn’t or wouldn’t do very much. The only real leverage schools had was directly connected to what parents would do to deal with their children’s behaviors. So, when parents did nothing or even encouraged disruptive, destructive, or violent behavior, the school was left in the lurch: stuck with a student they had no leverage with and a family that would do nothing to help. I saw repeated cases of violent or destructive behavior that, under any other circumstances, could easily derail their lives very early. The student who strangled a teacher with a telephone wire in third grade and nothing happened. The student who pulled a box cutter on another student and nothing happened. The students who sent a teacher to the hospital with a fracture and nothing happened. All of these students learned, consciously and subconsciously, that they could be violent and destructive and those in authority would not act or might even reward the behavior.

Much has been made of the “school to prison pipeline” the set of practices that supposedly “criminalizes” children by introducing them into juvenile and adult legal systems at increasingly younger ages. What I’ve seen and experienced was the opposite: a school to prison pipeline built by a profound disconnection between students’ actions in school settings and realistic consequences. The students I worked with were conditioned for years to believe that everything from stomping each other out to sexual assault would be met with formalized bluster and bravado but no actual consequences.

The reasons for this dynamic aren’t all that complicated: the education system is in the business of shining shit and calling it gold. Teachers, administrators, and other staff understand that many, if not most, of their efforts to address any but the most destructive of student behaviors will be met with platitudes or unhelpful nonsense, or just ignored. Many bureaucrats of the educational hierarchy, serving politicians whose only interest is the perception of an ignorant public, institute policies that hide, ignore, or placate these students, further conditioning them to believe that breaking things and hurting people are the easiest ways to get a reward or out of the classroom. These young people learn that violent criminal behavior is a safe bet, or even a good idea, and school becomes a staging area for street issues or a fun place to throw a tantrum. As soon as the students cross the threshold to the outside world their conditioning will get them hurt or in trouble.

As the education system continues to churn out students who participate in, witness, or are victims of violent behavior for years with little to no consequences, it’s no wonder than many of these young people find themselves in trouble with the law or otherwise have difficulty being productive members of society. Ultimately, it’s the responsibility of families and friends to bring children up in ways that will promote their safety and development but schools can play positive roles in keeping students from being conditioned to take dangerous behaviors lightly or at least avoid facilitating a bait and switch that sets students up for devastating consequences.