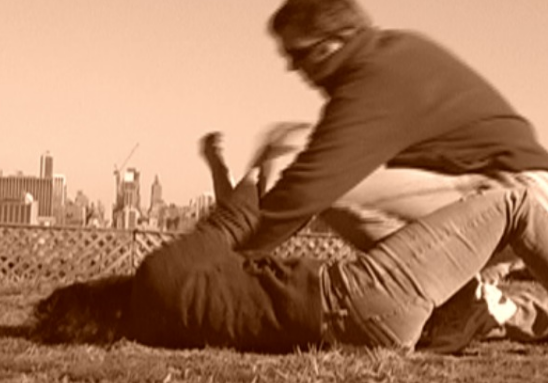 Look Out! Behind You!

Sadly, we don’t have eyes in the backs of our heads, which is why it’s a good idea to try and avoid zoning out during certain daily activities. When we keep our heads moving our peripheral vision does its job. Zoning out is necessary, but moments should be chosen. It can’t hurt any of us to be a bit more present at times.

When practicing any form of self defense be sure to avail yourself of your peripheral vision. Tunnel vision blinds you to the accomplice. If you always assume there will be more than one, you will never be surprised. The guy in front of you or in your line of site or talking to you is not always your biggest problem. Criminals often work in tandem, so assume there are at least two, if not three.

The hard part, of course is remembering to move your head while you are diving out of the way of the car that is bearing down on you.

Humans are pack animals so thinking in these terms can only help you on many levels. Adverse family and office conditions can also be disarmed through awareness of group dynamics.

(For in depth analyses of Group Dynamics the best information I know of can be found on the ConflictResearchGroupIntl.com site, Marc MacYoung’s blog at NoNonsenseSelfDefense.com and in Rory Miller’s book Conflict Communications.)

Another good assumption to make is that at least one weapon will be involved in any planned attack. Hopefully it is yours. That said, it is better for you to choose where you get cut than for your attacker to choose. Those are the hard facts. If you have to make a run for it or commit to an attack, the back of your hand or your body is better than the front.

If a weapon is involved and it is moving (and you can’t simply avoid it or run), track the movement from your attacker’s shoulder to his elbow rather than fixating on the hand. It is a matter of physics that the hand will be much faster than the shoulder and therefore more difficult to track. Stay to his side rather than his center and try to stop the shoulder and elbow, damage the limb, yank the arm to make him release the weapon, slam the weapon arm into a wall or the floor, etc.

There are ways to escape from a group of people if you find yourself at the center, and it involves something called Shooting The Gap. You find the weakest gap in the group, usually around hip level between the two guys paying the least attention, make yourself as small as possible, often by turning to the side, and dive through the hole with all of your speed and weight behind you.

The element of surprise is always a useful and important tool. If you can look like you aren’t about to make your escape you will fair better.

Run To Safety, Not Just Away From Danger

Once out, keep going. The hard part is to make intelligent choices under the influence of an adrenaline rush. At the very least, try not to avoid the truck and drive into the lake.

Try to avoid the center of your attacker’s body. His center is where he is strongest. It is where he can most easily grab you or harm you. If at all possible, stay to his side or his back. The side of the neck, base of the skull, kidneys, even back and side of the knee are better places to be and to attack than the front of the body, as a general rule.

In self defense classes the majority of practice takes place standing face-to-face, whereas in reality this is only one of many possible positions. Face-to-face attacks usually occur between people who are challenging each other in some way, as in a barroom brawl or a dispute, a good old fashioned mugging, or what is known in reference to gangs as an Educational Beat Down (EBD) in which a lesson is enforced. EBDs can also occur in Domestic Violence situations as in a husband (or wife) over-enforcing a house rule or demanding respect. Sometimes date rape occurs face-to-face but not always standing up, which is again how most practice is done. Since Face-to-Face attacks constitute only a portion of criminal confrontations your self defense class may be leaving out some important scenarios.

Women tend to be physically attacked in the following ways as well, according to police reports: grabbed from behind to be moved to a more private location, pushed to the ground or hit first as a warning.

(We are discussing physical positioning in this section. Remember that coercion is one of the most insidious ways to gain compliance. A criminal who threatens extreme violence against you or someone you love or threatens to expose something you have done may induce you to tie yourself up without his needing to lift a finger.)

There is no way to construct an exact replica of the type of emergency that might occur, so we are always dealing in approximations. Practicing one or even three positions over and over is counterproductive. To begin, what we need is to understand the tangled, frenetic and ever-changing nature of an attack situation and to choose a few options that can be performed from virtually any position.