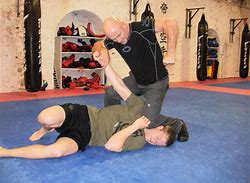 Between the ages of 16 and 22 years old I was fortunate in my Martial Arts journey to spend a great deal of time training under the direct tutelage of Japanese Sensei.

I learnt many lessons from these Masters. Some of these lessons were immediately apparent, others took years to suddenly make sense.

Here I am going to discuss one particularly valuable lesson I learnt as I progressed to my black belt and beyond.

I hope it will help and clarify some prominent issues for those on their own journeys.

The Japanese have a term in Martial Arts named SHU-HA-RI.

This term isn’t just exclusive to Martial Arts but generally how they learn any traditional art.

Let’s look at these 3 points individually.

In Martial arts terms SHU (preserve) means when you first learn a technique you practice it exactly how your Instructor showed you. You don’t deviate from it in anyway.

The way it is initially shown might not be the only way, but it is a starting point that you adhere to until a time were another piece of the puzzle will be revealed to you.

As a ‘Gung Ho’ young man full of testosterone and a burning desire to prove myself I used to get frustrated when I was told to perform a technique repeatedly.

I wanted more. I was eager to run before I could walk. I didn’t want to wait.

I see now that physically I may have got the technique down well but mentally I wasn’t ready to move on.

Training back in those days under Japanese Sensei was 2- hour classes of repetitive training of maybe tops 3 or 4 techniques. That was it. Fuck telling them ‘I’ve got that, what’s next?’

No, you kept your mouth shut and kept on drilling unless you wanted a broken arm or leg.

SHU is the foundation of your art. It is the deep roots of the tree going way under the soil.

The tree and its various decorative branches is only as strong as its roots.

Many of us as Westerner’s cannot grasp these principles. We live in a society now that can’t wait for anything and need instant gratification.

I now firmly believe in the saying. ‘All good things come to those who wait.’

Ask any high ranking black belt of their art that trained under Japanese supervision how many front kicks, wristlocks, hip throws, sword cuts they have done over and over.

The widely touted theory, highlighted in a 1993 psychology paper and popularised by Malcolm Gladwell’s book Outliers, says that anyone can master a skill with 10,000 hours of practice.

Scientists, however, remain sceptical. They also say you can add intelligence, age, personality or maybe something else into the mix.

How long would you need to train a day? Well to put it in perspective if you trained 90  minutes a day (which is the usual length of a training session) it would rough take 20 years to be on the ‘tipping point’ of greatness.

Train 8 hours a day that time will drop.

The question is how good to you want to get?

Also, what is the quality of the training you are doing?

We have the old example of the guy who says he trained for 3 hours in the gym today.

Reality says he trained an hour, scratched his balls and looked in the mirror for another hour and the final hour was taking up chatting to his mate and eyeing up the woman.

When you see an athletic at their peak winning gold, a football team winning the world cup a tennis player winning Wimbledon or a fighter winning a world title then you are beginning to understand what it takes to master your chosen art.

Dabbling isn’t going to cut it. A once a week 90-minute class isn’t even going to get you to average.

Japanese Sensei didn’t want average. They demanded greatest. Most students didn’t cut it. Many fell by the wayside when the going got tough.

Now don’t get me wrong after 40 years of training I am still looking for greatness, but the difference is I am still on the mats trying.

The lesson to be learnt here is a good instructor at the top of his game and his intentions honourable and not for self-gain will know when it is time for you to grade, move on or learn something new. Not you.

This means at this level the student can now start to take apart technique and examine the material. Now with solid roots in place they are ready to play around with things and determine the principles and reasoning behind them.

Their technique now is not just a bunch of ‘tricks’ they are delving deeper into their origin, inner core and meaning.

You may have learnt a technique in a certain manner up to this point, but it doesn’t mean that is the only way to do it. Also, you will begin to understand why that technique has been taught that way up to now and why you are going to see it in a different light.

Again, many don’t stay around for this level and have given up with a half assed idea of what that Martial Art is all about.

My base art of Japanese Combat Jujutsu originates from the Katana (sword). How many people out there training or teaching jujutsu know this let alone be-able to show the links between sword and unarmed?

I know this because this is what my Japanese Sensei showed me at HA level. Why? Because I stuck around and came through the SHU level.

At this point in your training you are now expected to take those core principles and techniques and add your own expressions to them. To have the knowledge and ability to come up with new or different interpretations.

You should have gone through the rough, scrappy training phase and now developed a smoothness and flow to your technique. You will have been through your ‘proving stage’ and you will be now working towards a higher level of mastery.

This really outlines your journey from white to black belt.

Higher mastery goes with you through further Dan grades and how far you wish to go in your chosen art.

I recall as a young man hell bent on achieving my black belt and Japanese Sensei telling me that you will have only then learnt the basics. Once you have reached your goal of black belt that is when you really start learning.

Now I know they were right.

In this rapidly evolving world of Martial arts we must always be working to move forward after all we are only as good as the last time we stepped on the mats, but we must never forget the lessons learned from those who went before us. Those lessons are surprisingly still relevant today.

But as Winston Churchill once said, ‘Wise men stumble upon the truth and get up and walk away.’