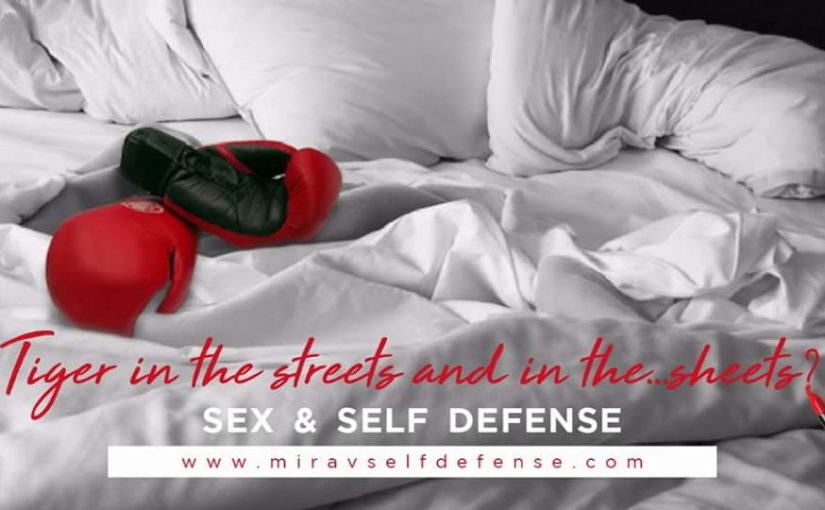 Is it just the looks that count?

When I ask men “what makes me sexy in your eyes”? I hear everything except comments about my body. It is not your breasts, legs or other physical features that make you sexy, it is your confidence. From the Mona Lisa to Marilyn Monroe and Angelina Jolie, to women whose beauty isn’t that “clearly out there” (like me!), if you are confident, it passes layers of cellulite, fat or so called “ugliness”, you will be attractive, because a woman who is confident in herself, loves herself, is in control of her life and her surroundings, and doesn’t wait for prince charming to save her, is sexy. Now, what does that have to do with self defense?

Can he handle you?

When a woman takes “a man’s role” and trains herself to be able to protect herself and her loved ones, many things can happen to the man’s mind: he feels emasculated. Isn’t he the one supposed to protect her? He feels less of a man, but at the same time he also admires her, and trusts her more to be able to do that job. Men’s reactions to this vary but the problem today is that most men feel less of a man instead of pure admiration because of their weakness and fear caused by their life experiences. This is contributed to by factors like the media, parents, socialisation and so on…. resulting in a man maybe trying to take away your power (in radical terms: becoming an aggressor, humiliating you, belittling you and so on) which in his mind can be compared to a “fight” reaction. On the other hand there can be the “missing man”. Every strong woman has had loads of those. Men who escape when feeling overpowered. They might find another woman, an intense job, or just act very coldly. They become absent; missing. Sex becomes horrible, almost as if you are forcing him to have sex with you. He isn’t there any more.

Beauty in the eye of the beholder

There is the rare man who would admire your increasing power and journey, and encourage it. You become like 2 race horses, riding side by side, regardless of whether the man was sitting on top of you before (you are the horse) trying to control you with his power, and then fell off your back because you wouldn’t surrender. The 2 race horses do it cheerfully, encouraging one another, admiring, persuading to continue, to grow! (or go!) He finds you as sexy as possible, and you do too, and the sex- the sex is incredible. A fascinating, breathtaking , powerful sensation, instead of the half asleep one you had before (the missing man).

A woman who is powerful, and empowered does that. What do you prefer? To live in a secure “comfort” zone where your prince charming is with you because he feels “on the top” but the minute the game changes he is gone? It is not real? Or to be with someone who lets you be who you were meant to be? Free, strong, sexy?

There is another, perhaps surprising connection between sex and self defense. A person who practises sd has less fear of death, knowing there are less chances that would occur. A study I did as my theses for my psychology degree showed that the more there is a fear of death, the more casual sex appears. Casual sex can be amazing, yes, but it doesn’t have the debt a real and good sexual relationship has, because to be in sync with your partner sexually, he has to know your body, your likes and dislikes, as so do you. As you reach your peak of sexuality, you start to understand that you can have more than just a physical orgasm, you can have an almost spiritual one, with the right partner. It is rare, difficult to find, but not impossible. And you don´t find it by “trial and error”, you find it by getting to know that person on a deeper level. The better, deeper sexual relationship happens with the more steady relationship (monogamy). Now, the less fear you have of death, the less partners you have (your need to leave children after you is lessened) therefore the sexuality and sexual connection is increased. You see, it is scientific! So if you practise self defense, you fear death less also on a subconscious level, therefore have better sexuality in your life.

And that, my friends, is yet another reason why you should learn to protect yourself. Just for the sex of it!