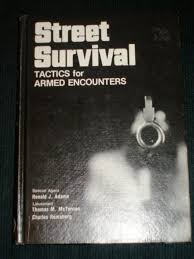 If you want to step up your game, improve your security stance, and increase your chance of surviving a violent encounter, you owe it to yourself and your family to educate yourself. Reading this book would make a great start.

It was first published in 1980 for the Law Enforcement Community, and I am assuming that it was written after too many Police Officers had been killed in the line of duty. Studies had been conducted that found their mistakes and identified the source of many of those mistakes made.

This book also served to launch a travelling road-show called Street Survival, which sought to correct a lot of the common mistakes that officers had made in the field. To that end, the Street Survial series of books served for many years as required reading in many academies.

I was lucky enough about 6 years ago to come across more than one reference to these ‘lost books while doing my own research to keep myself safe. These books contain a lot of great information. In these books you will find much of what we study and take for granted today. The adage, “Study the Old, to Understand The New” applies here. We didn’t invent this stuff.

One of the biggest challenges of learning anything is that you need to look behind the curtain and question many aspects of it – why does it work, what makes it work, why is that knowledge perhaps more important than the knowledge itself? If you want to learn anything, take ownership for your  own endeavors and effort. Ultimately, only you are responsible for you. Own that.

Much of what we train today, is not new, or original as you may be lead to believe. Exploring older books can lead you to some ‘new’ discoveries – tactics, techniques, philosophies, principles. This book is 36 years old, and yet there is a ton of relevant information in it that still applies and holds up today.

Below I’ve highlighted just a portion of what I think is still relevant and useful for self-defense, and I hope you do too!

Some of the many ideas found within the first volume of this series and which are worth reiterating here are:

I’ll explore Volume 2: The Tactical Edge in a future article!