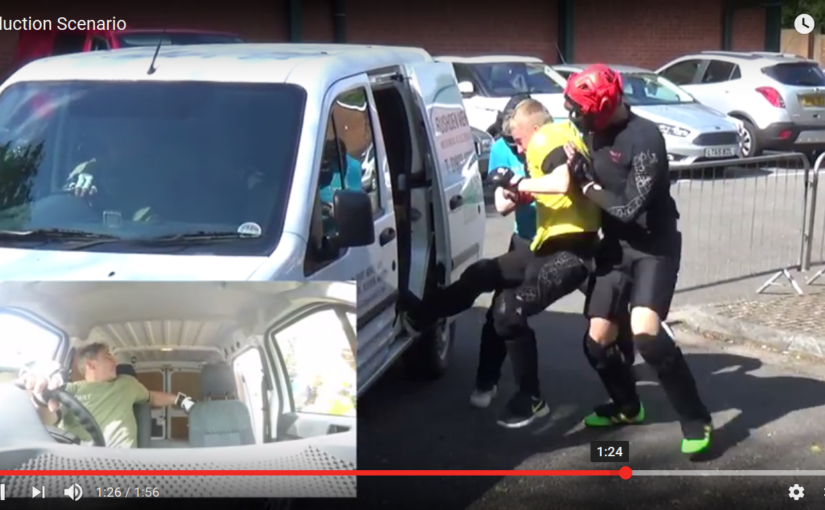 The sobering reality of a fake abduction

On Saturday, under my supervision, four teenage boys (aged 13-14) experienced a fake abduction. This was a single scenario in a multi faceted training day for both adults and teenagers. While this is a very rare event, it is perhaps one feared the most by parents, and so we wanted to see what we could learn from replicating an example.

Like all training, we had to make compromises for safety. The most glaringly obvious compromise was that the boys knew they were going to experience an abduction attempt. They also knew which vehicle the attacker(s) would use. What they didn’t know was how many people would be involved or how we would set them up.

That wasn’t the only compromise:

– due to a scheduling clash we had to stage our scenario outside a venue filled with young children with open doors for ventilation, so the teenagers couldn’t shout for help or bang on the vehicle,

– the vehicle wasn’t scrapped so we couldn’t kick it or hit people into its bodywork.

– for safety all shots to the head were pulled; the attackers wore headgear in case of backward uncontrolled strikes,

– the teenagers were bare-headed and we decided to proceed on the basis that the attackers would use body shots to subdue them so as to preserve their looks.

Each teenager entered the scenario ‘blind’, not having seen the ones that went before or having had opportunity to get any information from the previous participants. They were asked to walk down a particular passageway as if on their way home from school or visiting a friend. An aggressor would run up behind like a jogger, and then grab the boy to lift him into the van where a second person could assist in controlling them. A third man was behind the wheel.

This obviously represented a possible attack. More people could have been involved. We could have used a fake weapon for intimidation. The aim of the exercise was for all of us to see how difficult it was to escape once the attack had begun, and how quickly it could be done.

The results were chilling as you can see.

Of the four participants, three were taken with the van ready to drive away within 12 seconds from first contact. The longest resistance lasted 35 seconds, and had he not been pulling his shots (for safety) that young man might have escaped or caused his attackers to abandon their attempt for fear of being caught. As it was we did attract some outside attention.

One of the most obvious things to take away from the exercise is that awareness of your environment is everything. Anyone listening to music on headphones would be easy prey. Hoodies would reduce peripheral vision and reaction time. Choice of routes, walking in company, wide corners and how you react to people around you in terms of innocuous hand positions (scratching the back of your neck for example) would make a difference in reducing the odds of being a victim and in being in a better position to resist.

These abductions featured bear hugs in what is their most likely use. These particular scenarios reinforced that unless you act before it is fully on, you are not going to get out very easily, and you probably won’t have a stable ground platform to work on. I teach bear hug defences to illustrate principles of movement, and to try and ingrain the reaction to move before it is on, but I recognise that the attack is both rare (because there are very few scenarios in which someone would do it) and that once it is on then most defences I’ve seen demonstrated (including my own) are ineffective until the person starts to release you.

If you want to theorise about bracing against a van, or pushing off from a van, or a car boot… try it. Come up with ideas, but then try them until you have some high percentage solutions.

This was nothing more than a training exercise, but it has given all those participating something to think about.