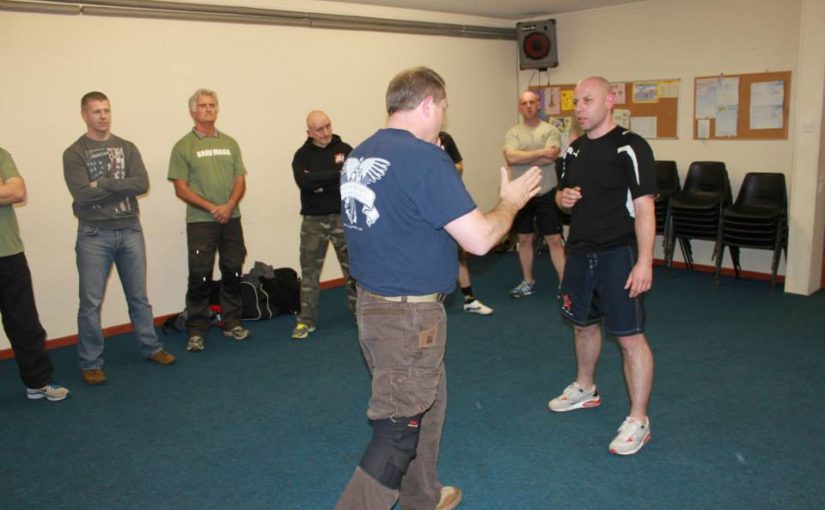 In my opinion, there are four ways you can get a skill into someone else’s head: Teaching, Training, Operant Conditioning and Play.  All have uses, all have drawbacks.

Teaching is sharing concepts from brain to brain by juggling symbols.  Lectures, writing, and diagrams are all teaching.  This article is teaching.  And almost anything taught is useless under stress.  The neocortex is far too slow to handle the action of a sudden assault.  No one can simply read a defensive driving manual and respond appropriately when a deer jumps in front of a speeding car.

Teaching is a first step to understanding.  Teaching is what allows us to make connections with new information, to come up with possibilities to test.  It is critical to laying the groundwork so that the students are prepared for the other levels of training.

Very importantly, teaching needs to be taught.  Communication skill needs to be communicated.  Learning to teach by trial and error can destroy a lot of good students.

Training is anything you do by conscious practice.  It is all the drills and rote memory practice.  The thousands of reps punching or stepping into a throw or transitioning precisely from a specific armlock to a triangle choke.(And, for the record, be careful with the language here. We are so used to using the word, “training” for all aspects of preparation that I may not distinguish training from teaching, conditioning and play consistently.)

Training is likely useless in your first real fight. According to Ken Murray in “Training at the Speed of Life” the Air Force set ‘ace’ at five dogfights because their best research showed that no one—no one—remembered their training for their first three to five dogfights.

Grasp that.  With the best training in the world, you still got through your first 3-5 fights on instinct and luck.

After this threshold, training did kick in and you had an ace, someone with instincts, luck, and now he or she could use training.  And that is damn formidable.

This is the abyss for self-defense instructors. “You will fight the way you train” is a lie. The first force incident will be a mess of your nature and your conditioning and past experiences and half remembered training experienced in a stew of hormones, brain chemicals and adrenaline. “You will fight the way you train” becomes true with experience. This is one of the crucial differences between teaching professionals and civilians. A professional in certain fields– policing, military or club security, for instance– will hit that threshold and will be able to access their training. But the average civilian should not face that much violence in a normal life unless they are making very poor decisions.

Part of the problem with training, like teaching, is that it wires to the wrong part of the brain.  The thinking mind is slow, far too slow to be of use in an ambush.  Training physical skills to the thinking mind makes them almost useless.

A certain amount of rote training may be necessary, but I am coming to doubt it.  There is a very real possibility that, for fighting purposes, ‘reps’ do far more harm than good.

The principles of Operant Conditioning are simple and a Behavioral Psychologist will argue that this is the model for all learning:

Something happens.  That’s the stimulus.  Then you do something, that’s the response.  What you did either makes things better (Reward) or Worse (Punishment). You see a hot stove (stimulus) you touch it (response) you get burned (punishment).

Operant conditioning works at a subconscious level. There is no cognitive processing to it, which is why it is one of the few methods that can bring someone close to reflex speed.

To properly use OC as a training method, the stimulus must be clear, and the stimulus must match what you expect to encounter. A fist flying at your face is unambiguous. Punching people is a good stimulus. Also, the response must work. An effective response is it’s own reward. Punch to the nose, good stimulus. Bob or  parry fast enough (response) to not get hurt equals a reward. A block too slow equals getting punched in the face, commonly considered a punishment.

To effectively use operant conditioning, many martial arts instructors have to change their teaching style. If you are used to correcting details, that is incompatible with OC. If the student must try to anticipate what you will correct, she must be thinking, and the whole point of OC for self-defense is to move faster than thought.

Understand that conditioning trumps training. Common example: A student trains for years to become good in a sparring session and one day scores on the instructor. Instead of celebrating, the “master” with the bruised ego proceeds to make an example of the student. The student trained for years to win, and when he did, he was punished. The years of training have been wasted because the hindbrain, the old brain, has learned that winning is punished.

One act of poor conditioning can erase years of training. Never, ever, ever punish someone for being successful at what you taught her.

Reward and punishment are very specific concepts in OC training.  As are the words ‘positive’ and ‘negative.’ Reward is anything that increases behavior.  It is almost always something that makes people feel good.  Reward is different for different people because we don’t all like the same things.  But even things as simple as saying, “Good job” are rewards.  And saying, “Good job but this is wrong, do it this way” is not only a punishment (all corrections are punishments) put sends a mixed signal and makes the deeper part of the student’s brain trust you less.

Positive and Negative are not value judgments but only indicate presence or absence. Reward and Punish are the value holders.

Negative Reward (NR): Something bad DOESN’T happen. Kid gets a night off from homework.

Positive Punishment (PP): Something bad happens. Kid gets a spanking.

Negative Punishment (NP): Something good is withheld. Kid gets grounded.

Timing on reward/punishment is critical. Just like you can’t punish a dog for a day-old stain on the carpet, it won’t do any good to tell your students they did a good job at the end of class.  Reward and punishment must be as immediate as possible, just like in the real world.

Training, as said, doesn’t come out in your first fights.  Conditioning will, good or bad.  The things you have conditioned will happen too fast for your decision making process. In a life or death emergency, good conditioning is a life saver.

Play is the fourth method of learning.  In my opinion, it is the most important. This is how all animals learn.  This is how you learned everything you are really good at.  You can memorize thousands of words in a foreign language and know all the rules of grammar, but until you can go to the market and haggle and argue and flirt, you don’t really speak the language.

It is an effective learning method and we are wired to absorb and integrate knowledge this way.  How long does it take a kid to learn a video game?  Most kids are proficient in hours at most.  Because they run through the tutorial and then they play.  If we tried to teach video games the way we try to train martial artists, how many years would it take to get to that level of proficiency, if at all?

Anything you teach, anything you train, will ingrain harder and be more available under stress, if you have made a good, hard physical game out of it. This was Kano’s epiphany about judo.

Play has operant conditioning built in. There is immediate feedback on what works and doesn’t and realistic stimuli.  And this operant conditioning works in a framework of chaos and irrelevant stimuli and all the other things that make real encounters so difficult.  Life is an awful lot like play, if you want to look at it backwards.

One caveat, and this goes for designing play and for conditioning:  The game is the game.  It will never have a one-to-one correlation to reality. Getting good at sparring or getting good at push hands or getting good at rolling are all pieces.  You will get a visceral understanding of principles some of these games.  But if you believe the game is the reality, you have just willfully blinded yourself, and that blindness can be passed to your students.