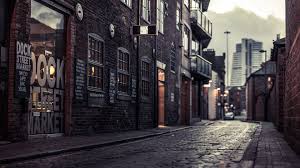 Imagine an athletic, powerful, high ranking martial artist. Can this person defend him or herself? Most people would say “Yes! So and so is such a badass!”

Let’s reframe the question. Is this person street smart? The answer now should be “I have no idea”.

What does it mean to be street smart? The standard definition is a version of the following:

“Having the experience, knowledge, and ability necessary to deal with the potential difficulties or dangers of life in an urban environment.”

Let’s examine some other activities for comparison.

A street smart skateboarder knows how to safely maneuver his board through all types of city terrain. He can ride on a sidewalk without crashing into people. She can ride in the roadway without getting hit by cars. He knows how to avoid the large cracks and glide over the small ones. She knows which streets have dangerous blind spots and sharp turns, and which streets are manageable. All of this knowledge is relative to his or her own particular skill set and ability. One type of environment that is dangerous for one skateboarder may be safe for another and vice-versa.

And so it is with a smart rock climber, a smart mountain biker, a smart skier and more. Smartness refers to the person’s ability to stay within his or range of ability and deal with the inherent dangers in the environment. When you are smart, you know what you can do and what you can’t do with a high degree of accuracy. You know when to “go for it” and when to “back off”. You know your environment and yourself.

On the other hand, a dumb skateboarder/climber/biker/skier doesn’t know the limits of his or her capabilities. That is a major reason why they get injured or killed. They put themselves in situations and environments that exceed their current ability.

Dumb doesn’t mean inexperienced or unskilled. A person can be relatively inexperienced and have a beginning skill and still be smart, if he knows his limits and purposely stays within them.

When it comes to self-defense defense, a street smart person knows his or her personal capabilities relative to threatening and violent situations. He knows what action(s) will work for him, on who, in which type of situation. She knows what will not work for her, when and why. She knows when to engage and when to disengage.

Street smart people are able to accurately assess their abilities relative to the situations they encounter in urban environments. Street dumb people cannot and do not.

Getting back to the imaginary martial artist. He or she could just as easily be street smart as street dumb. We have no evidence either way. And if this person is street dumb, then can he really keep himself safe? Or is she likely to “fight” the wrong person, at the wrong time, in the wrong situation. Which means that he/she really can’t defend himself regardless of his/her “badassness”.

So how does this happen? How has technical martial arts ability become disassociated from street smartness? The answer lies in manner in which physical self-defense technique is taught and evaluated in a training setting. You are effectively judged on what you can perform without regard to what happens when your actions fail. Or if the actions you performed were excessive for the situation.

Learning your technique failure rate as a systemic issue is not a consideration in training. There is no method for determining and then improving upon your failure rate. You get points for trying and success, but lose no points for failure. Therefore, you never really learn the limits of your current ability. In real life, everything has a failure rate. All ropes have a breaking point. In fact, knowing the breaking point of a rope is a major consideration for determining which rope to use in which situation.

When you skateboard, rock climb, mountain bike and ski beyond your current ability, you fall. You get instant feedback that usually hurts and may cause injury. This consequence teaches you the line that that separates “go for it” and “back off”. These activities all involve constant feedback. In fact, a major aspect of these recreations is to engage in them in different environments under varying conditions. They are not done over and over in the same place. Variety is an integral part of the learning and play experience.

But this line is rarely drawn in martial arts and physical self-defense classes. The focus of these classes is to get people to learn how to do the “move” or technique “better”. And if you “know how to do it properly”, then it is assumed to work on everyone – all the time. The focus becomes on learning how to do it “right”. And once you can do it “right”, then you move on to the next technique. But you never determine your skill level’s breaking point and failure rate.