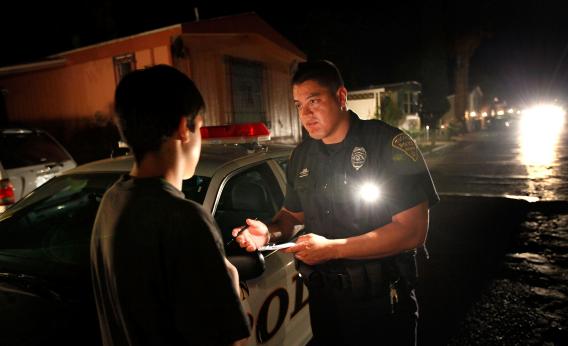 Often, in the ’back room chats’ here in CRGI we find a number of contributory concepts throw up interesting and useful little ’nuggets’ of information. I often find, these ‘nuggets’ come in the form of something one or more of us founding members deeply ‘know’ and are (pleasantly) surprised when we realise that this maybe ‘new’ to people. It’s a balance between ‘how can people not know this?’ and ‘well, we can share this because it’s really good to know’.

I was recently re-reading some of Marc MacYoung’s and Rory Miller’s work as well as back issues of this publication, and while walking with my daughter Christmas shopping this weekend, suddenly a little ‘nugget’ came too mind. Clint talks clearly about the importance of ‘Witness Coaching’ as do Messrs. MacYoung and Miller. In a previous issue of CM Magazine I wrote about the concept of ‘Left and right of Arc’, thinking about the nuance, details and extremes of any given subject.

My youngest daughter is now 10 years old and is insightful and curious about many things. This has seen a great opportunity to increase her observation and awareness skills of late. We previously have been looking at behaviors and ‘things that stand out’, but I wanted to move now to memory and recall.  The game we played, was she had to describe someone nearby and I had to point out who it was. My wife played also and it was interesting to see who picked up on what ‘descriptor’ details. Then a flash of recall…

In many ‘follow ups’ and investigations I’ve conducted both in military and civilian occupations, I have used, with very good effect, the British Military ‘Descriptor’ Template. Anyone who knows anything about the Military, knows they have to have reports in a ‘standardised’ formats. A quandary was reached in the early 80’s when military housewives, while being encouraged to ‘stay vigilant’ and look for suspicious activity in and around military accommodation (due to the escalating terrorism threat) made regular reports to barracks police who then had to try and make the (widely varying quality of) details given, not only ‘fit’ in the reports, but be of any use.

Thus was born the ‘A-H’ system. A simple, easy to remember list of ‘Key headers’ that people could use to identify and remember details (of use) and provide comprehensive and consistent reports. The Key Headers are as follows:

We can expand on each of these with a little more detail:

Age – if you can’t be specific then try and ‘bracket’ within (ideally) five years e.g Between 25-30.

Build – Athletic, Obese, Skinny as some examples, but I’ve also had ‘sexy’, ‘curvaceous’ ‘muscly’ and ‘rugged’ used as well. If people struggle to define a build, I’ll often ask ‘Who are they built like?’, sometimes it’s easier for people to give a specific (normally celebrity) example and then get further detail from there. We are trying to build an overall profile and description and build is an important header.

Clothing – I encourage people to be methodical here, either describe head to toe or toe to head. So type/colour of footwear? What clothing items on the lower party of the body? On the Torso? Gloves? Items around the neck? Headwear etc. Here we can also think about ‘presence of the abnormal’. If it’s warm summer weather and the person was wearing a heavy or bulky jacket that is potentially useful information to follow, but then we digress to investigative procedure…

Distinguishing Features – What stood out about this person? Scars? Tattoos? Tribal identifiers (e.g. Uniforms, Use of Gang Signs)? Prosthetics? If you were closer enough to hear or engaged with them, Accent? Use of Slang? Etc etc

Facial Features – Of most use here will be the shape of the face, details on eyes, nose, mouth, ears and skin tone. Distinguishing features also cross over here, along with specifics such as if facial hair is present etc.

Gender / Gait – So here we are squeezing two descriptors into one heading.

Gender, either actual or assumed.

Gait is something people very rarely think about. To clarify ‘Gait’ is referring to ‘locomotion achieved through the movement of human limbs’, or to put it simpler ‘how people move’. While appearances can be masked, clothing can be discarded, even facial features to a point can be changed it is very, VERY hard to change the way you move. In fact, many of us could pick out a spouse or loved one from a distance on this alone, so this shows how useful a header this is… Ambling, unco-ordinated, uneven, lop sided, powerful, swaggering, are just some of the many ‘Gait’ descriptors I’ve heard, but there are many more.

Habits – There is a very wide range here. Do they smoke or similar? Any facial ticks or twitches in the limbs? Use of certain actions or phraseology (Rory mentions recognizing ex-cons by how they interact face to face, to give just one example)? These would be some of the ‘broad headers’, all the way down to the detail, what brand of cigarette? They drink, what were they drinking? Presence of religious symbols also fit nicely into this category.

We are, by nature, creatures of habit and many a person has been caught because of a habit they could not break.

Ultimately, all of these descriptor details present the authorities the greatest opportunity in being able to identify people that may have had involvement or been witness to an altercation or incident you were involved in. Imagine being involved in a situation or even a ‘near miss’ and the frustration you would feel in not being able to give a clear concise description of those involved. Being a good witness is about not only observation, but remembering relevant details. It is hard to know what may be relevant at the time, but we can safely say accurate descriptions of people involved will always be useful information.

A central tenant here in CRGI is helping ‘make people better’. I particularly enjoy writing on subjects that may be of use to students and instructors alike. So, Instructors, consider for your next class having your students spend a few minutes trying to describe someone in the room and see how well others can guess who they are referring to. If you are finding a low success rate, consider introducing your students to the ‘A-H’ system and see if it helps. I know I have benefited from it greatly not only as an investigator but also as a witness.