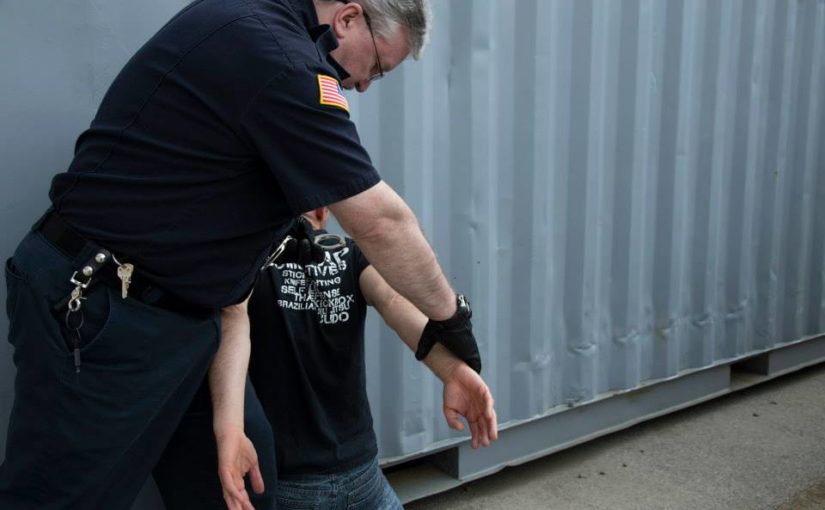 I have been doing Hospital Campus security for 7 years. When I signed on, I immediately undertook a journey into darkness. I found out within a year that I was going to need all the help I could find elsewhere. To that end, I am not a professional Martial Artist in the strictest sense. I learn from the traditional and modern martial arts. I pick and choose those pieces that I know I can use, and I know that I can justify and defend in a court of law. I train and educate myself as too many have excuses not to do so.

For the last 6 years I have sought out a different type of education and a group of professionals that ‘have-been-there-and-done-that’ – a small group of talented trainers, educators, teachers. Not everyone that deals with violence in our profession can articulate or try to explain the what, why, how things. I trust ALL of the people in CRGI for that, as well as some other like-minded professionals from other ares of expertise – LEO, Corrections, Military trainers.

In this group I totally support and endorse Marc MacYoung, Rory Miller, Peyton Quinn. They were my first clue as to what was out there, and how I was going to deal with it successfully.

What I can bring to the table is dealing with violence in a health-care setting. The way I see it, I deal with the same people that Rory did during his career as a Corrections Officer, but from a different set of guidelines – no in-house training, no support, no weapons, no first-strike capabilities, no striking/kicking/chokes etc., no backup, no staff support most of the time, no real outline of rules, lots of cameras and lots of monday-morning-quarterbacking AFTER the fact. In short, not a job anyone in their right-mind would take knowing all of these limitations going in. Add to that starting out at 52 years old. Getting the picture now?

So, I can share a lot of stories and examples of things that I have experienced dealing with those people that live alternate lifestyles – drugs, alcohol, abuse etc. Dealing with the physical may be the easiest aspect of this type of job, dealing with the verbal aspect IS one of the hardest, yet most rewarding aspects.

Marc MacYoung once told me that I’d already shown him enough ability with the physical aspects of the job, and he recommended getting more training on the verbal aspect – great advice. To that end, and at the time he and Rory were pairing up on a new concept – Conflict Communications is what they were going to call it. It was going to be a traveling seminar road-show, maybe a book, maybe a DVD. CRGI is one end-result of those years of collaboration by two of the BEST minds in the business of violence.

I own almost every book that Marc has produced, but not too many of his DVD’s – most of his early work was only accessible via VHS tapes. At first, reading Marc’s output was challenging. Not because it was difficult to read, but it WAS difficult to read from a ‘normal’ perspective. I had no real introduction to violence previous to taking this job. I’d led a fairly safe life – due in part to being white, middle-class, and non-violent as my norm. We’ve all seen a lot of violence, particularly of late, but in our previous adult years and teenage high-school years as well. What we were particularly not aware of though was REAL violence. The kind of violence that the mere mention of gives us concern. We don’t want to hear about it, know about, and especially see it or experience it.

Marc started to open that dark cellar door for me. SO, reading his stuff WAS difficult. Not knowing him personally, and reading how cavalier some of his thoughts were WAS disturbing to me. Kind of like sidling up next to a group of bikers – you WANT to hear some of it, but hope they won’t notice you’re eaves-dropping in on them. That’s what my first couple of Marc’s books felt like. “What kind of guy DOES this shit, and then writes about it? How’d he get away with THAT?” Well, that’s how it started. Marc admittedly came from a rough up-bringing, turned his life around, and then chose to educate others that could appreciate, learn from, and stay safe based on his lessons. Thank you Marc.

Rory I found probably through Marc, or maybe Loren Christensen – I cant recall specifically. I am immediately drawn to Rory because of what he does or did. He was working with the safe ‘clientele’ that I was, with the main exception being that he was in a prison setting. Without hesitation, I recommend him to all LEO, or Security professionals because his experience is directly related to what I do. Marc’s is as well, just form a different perspective. Rory was writing a blog at the time I ‘found’ him. Large parts of that blog became the first e-books that I purchased – Chiron Training. After reading the very first volume I was hooked. Here was I guy that I totally ‘got.’ I can’t tell you why in so many words, but he ‘spoke to me.’

In one of his blog/e-book entries Rory describes a ‘typical’ day on his unit. He was asked to respond to an inmate that was acting out in his holding cell. Rory headed a CERT team, and his job was to move this individual after subduing him using whatever level of force was necessary. The inmate had already made preparations for the soon-to-happen assault by unusual means. Rory’s team was prepped, kept just out of sight while he chose to offer an alternate solution before breaching the cell. In a moment of genius (and Rory really is a very deep thinker) he chose to keep the team out of sight, but ready to perform a cell extraction by overwhelming force. He pulled up a folding chair about 6 feet from the cell door, and simply sat down, crossed his arms, and waited… NOW, go find that story and learn from it what I learned. What happens next is sure to change your world like it did mine – if it doesn’t, your either in the wrong job, or you already possessed that knowledge and foresight, which frankly I find hard to believe. Thank you Rory.

Peyton Quinn – another of the unknowns. He is a character every bit as much as Marc is. THEY are two of the originators of what this group has been assembled because of. Violence. I have known Peyton for about as long, and did find him through my connection with Marc. Another book. Suffice it to say that Peyton is as unique as any of these commanders of violence. Peyton is also a Martial Artist, a rogue of a man with a huge heart, and some really intense depth of knowledge as well. He’s an educator, a writer, and he knows his stuff as well. He’s also willing to pass this stuff on. About four years ago I had the pleasure of working on a few projects with Peyton. Specifically a book that he was writing at the time about Musashi’s Five Rings. Peyton asked me to read it, and help him out with some editing, which I did out of respect, friendship, and admiration. Thank you Peyton.

There are many others here that have helped me along the way, and I am very thankful for all of those contributors as well. What I do is not unique, but you’ll be hard pressed to find anyone talking about let alone teaching what it takes to get out unscathed. I can only say that in 7 years, I have been assaulted more, hospitalized more, hurt more both physically and verbally, than in my entire previous life. Without the support of these proponents and educators, without their output, their advice, their willingness to share the ugly, I wouldn’t be writing anything remotely like this at all. I’d either have quit a long time back, been injured and beyond repair OR worse. It’s not an easy job, not just anyone can do it either – even if you are physically able to – and most of the young ones are that at least, it takes a LOT of maturity, it takes a lot of drive, it takes a lot of deflective capability to do this job to serve your community, and your fellow man. You have to do this job because you care, not because it pays well – it’s not even worth it for that alone. I do it to make a difference, to feel better as a human being, and because someone has to deal with people in crisis, period.

If you’re up to it, do the research UP FRONT. If you can get through several of the steps necessary to educate yourself, and still thin positively about it, MAYBE you’re the right person. MAYBE.