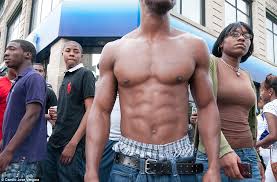 The first time I encountered the principles of self-protection I was very young. The house had been shot into for the first time, giving my bedroom an oddly soothing breeze, and my father and I were walking to our corner store. On the way, he explained the importance of vigilance and comportment. We encountered a group of young men standing outside the store, affiliated with some gang or other-the names were always changing. My father made a point of raising his voice to an off-putting volume and maintaining eye contact with each one. We were outnumbered, outgunned and unwelcome but the young men were perplexed by his boldness and let us pass without incident. As we walked home dad explained “the appearance of weakness invites aggression.” I pondered that, as long as a young child reasonably would, and came to the conclusion I would try to be strong too.

A combination of divine intervention, awareness, and savvy allies kept me alive and out of trouble until I grew up and had the opportunity to work with young people, frequently from worse situations. All throughout, I tried to reconcile the realities we’d faced with what I saw in  self-defense industry. It looked confusing. Often instructors didn’t come across as aware of the types of violence I’d seen: their answers were too simple, their techniques too complex to function in that reality. Later I realized the reason for the disparity: most “self-defense” was the security blanket business: selling things that don’t work to people who don’t need them.

I found that even solid self-defense instruction wasn’t built for life outside the suburbs. I saw instructors who’d served as violence professionals explain the primacy of escape, knowing that there was little likelihood their students would ever see their assailants again. This didn’t jive with the world my students lived in or how I’d grown up. We all knew that the issue often wasn’t the initial interaction, it was the aftermath. When challenged, I’d heard students credibly reference armed reactions from friends or family and if I’d been robbed or shot growing up, my more serious friends would have…addressed the problem. The first encounter would not have been the last: one side evening the score, the other pre-empting assumed retaliation. Most instructors seemed to have little to no interest in the aftermath: when revenge brought the dulcet tones of automatic fire to a family dinner.  Why not? Because that stuff is messy and self-defense in the suburbs is a whole lot easier to sell.

People in nicer places are a much better demographic for the security blankets sold by SD instructors; they’ve more to lose and are more likely to be scared shitless by largely imaginary threats. More importantly, people of means have the resources to make “self-defense” work for them. They can afford the thousand-dollar “deadly technique” weekend class, the DVD set, the CCW license, the lawyer on retainer, and all the rest. Though they’re more likely to get hit by lightning than bullets, their unjustifiable fear persists, often because they have minimal exposure to life outside Mayberry. Folk in rougher areas are a lot harder to teach: they tend to have experience, a low bullshit tolerance, and more complex problems. Taking a “fence” and pre-emptively knocking someone out might work well for them the first time but when they live two blocks away from the predator and his friends, events might play out differently, the next time. Most importantly, folk from violent neighborhoods know a harsh truth that uproots significant amounts of self-defense theory: you can’t blindly trust the state to keep you safe.

Put simply: most self-defense instructors I’ve met have levels of faith in the state that confuse the hell out of me. Some are in law enforcement or corrections, with a vested interest or a legitimate belief in the system. Others feel it would be irresponsible to talk about when they wouldn’t get law enforcement involved. Some are probably just trying to avoid accusations of impropriety or lawsuits. Regardless, it seemed strange to me because of how I’ve seen law enforcement handle violence. Early in my stay in D.C. a rival crew began a shootout with the drug dealers next door. I remember hearing sirens approach around 45 minutes later. The precinct was 2 minutes away and, apparently, responded to other crimes in the interim. Nothing surprising there; I’d learned early that depending completely on the state to handle potential threats was dangerous and stupid: they’re mostly people with jobs and no responsibility (or interest) to protect you. More important than being jaded with law enforcement’s utility, was learning that keeping yourself safe required careful balance of the legal and the practical.

The American justice system at the municipal level is a reactive organization designed to catch and prosecute criminals, not to preemptively protect citizens. Often folk who used the law to handle all their problems found themselves in violation of street code and facing enemies who knew the law well enough to get around or ignore it. Shunning, beatings, or more dire consequences ensued. Folk who focused too much on the practical found themselves in unenviable lifestyles filled with paranoia, dead friends, and prison sentences. Often what began as protecting their own evolved into a path they’d never escape. Those able to achieve this tenuous balance developed complex skills to manage interactions.

In most dangerous neighborhoods, even the citizens know the predators and their politics, helping them survive encounters. Young people I’ve worked were always well versed in the in’s and out’s of these environments: one teen planned his bus routes based on time of day and conflicts between rival crews. Family and friends of mine have also used knowledge of the landscape to help negotiate with predators. Hierarchies, however unstable, absolutely exist and reaching out to members or affiliates of influence can also help address problems in the making or find terms of negotiation to avoid bloodshed.

As these kids traverse the environment, they learn to manage their presentation. The image one presents is paramount and the savvy learn to develop a manner that keeps them off predators’ menus without looking like a threat to the foodchain. Once, at 16, I had to change my shoelaces during a bus ride to another neighborhood after a call from a friend indicated the colors were wrong.  Some teens use social media threat displays like posing with guns to ward off higher order predators. One boy began representing his gang at 8 years old because of the murder of his uncle, admitting in a moment of vulnerability that he felt stronger with a “crew” to back him. Knowing how to cultivate and maintain an image to keep the crowd from identifying a new victim, or new threat, is an essential skill.

The strategic minding of one’s business is as important as air in violent neighborhoods. Knowing which conflicts, yours or others, are essential and which can be ignored can diminish the number of engagements, and thus the risk, without the appearance of weakness. In a recent discussion, students openly admitted a refusal to intervene in conflicts or get police involved. Many had personal examples of folk who’d learned this lesson the hard way. In these environments, the refusal to assist law enforcement and theoretical “bystander effect” are frequently products of careful consideration and years of watching the mistakes of others. Because I’d seen the consequences of such calculus, instructors and students in the self-defense community always confused me when they waxed poetic about sheepdogging and the like. I wondered how many of them had ever smelled the blood on a wolf’s breath.

When legal options are minimal, having allies that can contribute overwhelming force makes a huge difference. In many tough areas, even the most upstanding citizen is related or connected to an individual or group ready to do violence on their behalf. The deterrence of knowing that someone’s gang banger cousin is ready to kill in retaliation is sometimes enough to squelch a more serious conflict.

Very few instructors are willing to acknowledge the complexity of regular civilian engagement with violence or the fact that many innocents are forced to manage these engagements, without the resources of their suburban peers, from a very early age. Coaches and sensei wax platitudinous about how anyone regularly defending themselves needs a change in lifestyle without considering how many decent people can’t visit the money tree in back yard to buy a new life. Study of self-defense has taught me a lot, much of it retroactively, but it’s time for the field to expand beyond well entrenched boundaries of the cul-de-sac.

One thought on “Beyond the Cul-De-Sac – Malcolm Rivers”