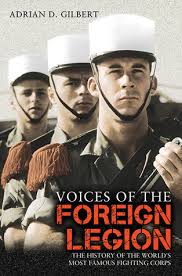 Exactly what the title says, but tells the story of the Legion via diary entries, memoirs and interviews from Legionnaires themselves, from its romantic inception in the deserts of North Africa to the post-colonial anti-terrorist operations of today. This sort of skin-in-the-game/boots-on-the-ground history fascinates me more than academic history, as here we get the eyes-on view of top-down policies, that is, we hear what the folks in the comfy chairs think should happen in the world, and then we see what happens when real men must trek through sucking jungle, scorching desert, hostile streets to attempt to render these pseudo-manly pipe-dreams coherent. The real-world view never matches the academic view.

The book is harrowing in places, graphic in many, sad in most, and in the end so so so so much death and destruction and suffering for what? Colonies in Algeria, Vietnam, the Congo, Morocco that don’t exist today.

Compare with our own experience today  in the United States’ longest war ever. In some cases fighting the same foe the Legion was fighting in the  19th century; it’s a sucker’s game with other men’s blood on the line. The days of joint-suffering on the Home Front are over. We have no rationing, coupons for days we can buy dairy products, we do not toil in Victory Gardens, we share no hardship with our fighting forces—imagine telling folks “We will ration your data plans or tamp down on streaming until our sons and daughters are home.” Maybe we’d see some resolve or sensible draw-down if for nothing else to make sure we don’t miss an episode of Game of Thrones.

Distance renders us callous or indifferent-same result—other people die, we pretend to care with bumper sticker sayings, and quickly forget as the “smartphone” beckons for another input of loving parental attention. It should shame us that our memories are not longer than two days of the year: Memorial Day and Veterans Day. It might ought to fester on our consciences that others are at risk, right this very minute, and we may not be able to point to that dying ground on a map or articulate what our “goals” are “over there.”

This fine volume reminds us that history has not changed: empty suits set policy and set strategy, a distracted populace seldom pays attention beyond a rote “Rah-rah!” here and there, and real flesh and blood suffers.

Smartphones get smarter, the users, not so much.

This excerpt from the book, is  a Legionnaire speaking of the catastrophic loss at Camerone. It seems to echo the sentiments of many military I speak to today.

“The appeal of Camerone to a legionnaire is as natural as instinct. He reaches out to it in his own heart, because it is part of his own pain. It is the great reminder to the legionnaire that the sand is always blowing in his eyes, the battleground is always ill-chosen, the odds are too great, the cause insufficient to justify his death, and the tools at hand always the wrong ones. And, above all, nobody cares whether he wins or loses, lives or dies. Camerone gives the legionnaire strength to live with his despair. It reminds him that he cannot win, but it makes him feel that there is dignity in being a loser.”

To all the “Losers” of our military, past and present. VALE!

To all the “Winners” state-side [self-included] may we do a better job monitoring all those “smart” folk who dig war so much without ever having fought.