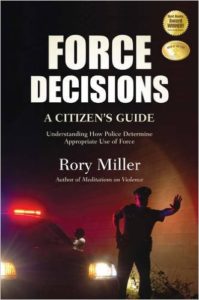 I just wrote this to someone about understanding use of force, are you willing to read a book?

The book title is “Force Decisions: A Citizen’s Guide to Understanding How Police Determine Appropriate Use of Force” by Rory Miller. It’s a whopping $8.69 on Kindle.

Rory will give you a different break down — and a very important one — but I want to focus on something else. There are three different categories. A good use of force. A bad use of force and — let’s call it — borderline.

I can point to the videoed incident a few years ago where a North Carolina cop shot a fleeing suspect in the back and then another cop walked up dropped a taser next to the dying guy to make it look like he’d pulled a gun. Bad shoot, bad, bad, absolutely no question. That was manslaughter and attempting to cover it (The now ex-cop Michael Slager is facing murder charges AND Federal charges). As this demonstrates, bad shootings DO exist… as do bad uses of force.

Then there are good uses of force. Like hey sending in a robot with a bomb against the sniper in Dallas. This AFTER killing five people and wounding seven more, he told the negotiators there were bombs and he’d kill anyone who came in after him. (I specifically use this example for a reason that will become clear in a second.)

Borderline are the booger. They are the ultimate “it depends” Starting with that they are VERY factor dependent. (Take the Castile shooting. Some reports say he had the gun in his hand by his thigh. Some say it was in his waist band and his hand was near it. ‘Girlfriend’ says he wasn’t doing nuthin’ and was legally carrying) You can’t really make a call until you get as much evidence as possible, then you’re still left with assessing if it was good, bad or borderline. Because with borderline an argument can be made for both positions.

1 – Many people have absolutely NO experience with physical violence. While most have only extremely limited experience. Yet they become instant experts on the subject when it comes to police use of force. Oh r’lly?

2- An often used term — and just as often dismissed — is “officer safety,” We’re not just talking death, we’re talking injury and permanent disability as well. I don’t know if you’ve ever had to go up against someone who you don’t want to hurt, but they have no hesitation about hurting you. Physically doing this without injury to yourself is to put it in the most polite terms, ‘a bitch.’ (If that’s polite you can guess how complicated and nasty it is) Officer safety is often dismissed when public opinion is driving the bus.

3- There are a LOT of people in in this society who believe “Violence never solved anything.” As such ANY use of force is automatically bad. I cannot stress enough the influence of this belief on the subject. Simply put, if all violence is bad, then all police use of force is — by extension — a bad use of force. Now is it tolerable? A necessary evil if you will? That would give you some leeway. (For example, bomb vs. sniper, still not right, but okay, if you must….) There are some people however, that both actively hate the cops and hold that any use of force by the police (not violence by them mind you, but from the cops) is automatically, categorically and unquestionably BAD. There is no good. There is no borderline, they are all bad. While often they will eventually reveal this extreme position, they will usually try to pretend their condemnation is about the use of force in this particular incident. (Remember the robot bomb? There are people condemning the cops for using it. I lie to you not.)

4- There is a growing … what? Trend? Movement. Attitude? …that you can treat cops like some asshole at the bar. As in you can argue with him and if he pisses you off you can attack his punk ass. The more general movement is Youtube lawyers (am I being detained), passive resistance, ‘you have no right,’ and the more extreme sovereign citizens.This is not only a foundation for the attitude of ‘fuck the cops’ but it often manifests in resisting arrest and physical attacks on the cops. What is often overlooked is how fighting the cops (even though you’re usually going to lose) gives you street cred.’ Do NOT underestimate the influence of braggin’ rights (Man, it took five cops before they could cuff me!)

Those four points — which factor into a lot of borderline incidents — are often swept aside in the rush to condemn a use of force incident as ‘bad.’

While I could say that reading Rory’s book will help you have a more informed opinion. That’s not the major selling point. People’s opinions tend to be their cherished pets. And gawds know that if you’re in a group who believes a certain way, being informed or daring to question accepted views is social suicide. The real selling point is to make more informed decisions in your dealing with cops. This so you don’t get your ass slammed to ground and then find out the hard way (and expensive) that what you were doing was non-compliance if not actually resisting.