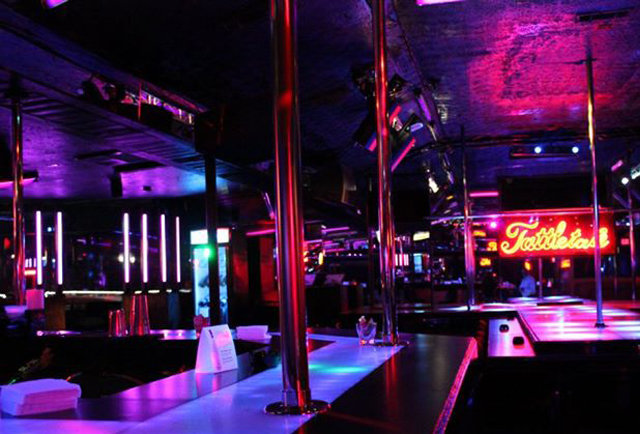 De-escalation of a threat or situation is often talked about as a way to avoid a conflict, create good witnesses, or as a way to set up your escape. It is a very serious topic, and a cornerstone of good conflict management, but that doesn’t mean that it always has to be a dark and difficult thing.

Of course, all of our training has to be context specific, and we always need to keep an eye towards our chosen tactic not working, and heading south. If talking a situation down does not work, or ends up escalating a situation, we do need to be able to step up the choice ladder and employ the next appropriate level of force. But that does not mean that de-escalation tactics, the employment of them, and the training of them has to be deadly serious. Sometimes the absurd or humorous is a great thing to use, and can save the day( or night) as the case may be. The following story will hopefully illustrate this point.

I was working a night shift at The Landing Strip. How would I describe the Landing Strip. It was a biker/blue collar topless bar, that also was one of the unofficial hangouts for both the Sons of Silence and the Bandido Motorcycle Clubs. On top of this, it seemed to be a favorite place for college and frat boys to slum and live up their fantasies for birthdays and the like. It had such a bad reputation, that when I took the job, and told some of my bouncer friends where I was working, the main question was;”God, why?” Or some crack about how hard up for cash I must have been. Of course, I had a really good time working there.

I would normally work to corral the straights, and the Clubs would police their own members, and that worked out fine. Honestly, we, nor our customers had much to worry about from the Clubbers, unless you really screwed up, they just wanted to hang out and have a good time. Maybe make some money, but they were smooth. It was almost always the frat boys and insecure straights that caused a problem.

This particular evening, we had the Sons in attendance, including some of the OFDs, or Old Foul Dudes, including Scrounge, who, quite honestly, was one of the few guys that scared me. If we had ever fought, I’m pretty sure I’d be medically retired, if not dead. He was scary, but good natured and easy to deal with. We also had a group of young guys celebrating a birthday. For whatever reason, they were bothered by the Sons, and there had been a few minor incidents, but pretty easy to handle.

Until one of the young guys sat on Scrounges jacket. If you don’t know, a Clubbers jacket is a pretty important piece of property, and symbolizes a great deal. As I said, Scrounge was pretty good natured, but this particularly pissed him off, and he came over to tell me I had 5 minutes to clear the guy out, or shit would start, and the Sons would sort it out.

A young, drunk guy with his friends is not the easiest of people to deal with. In fact, they are my least favorite people on the planet to deal with.
I hope you can see where good de-escalation skills, and the ability to speak with people would be better here than the ability to fight…
Anyway, I came up with a plan. I had a waitress and bartender talk to the young lad, while we set up to run a free shot special. Free shots are a big deal, and we would go all out, flashing lights, loud music, all the stops would be pulled out. The ladies got him out, and now was the time to smooth everyones feathers, and return a party atmosphere, instead of the tension that had built up.
It is important for a bar to not have fights, minimize the tension, and not get the police called. It is all about making money, tension and police stop the money flow.

So, anyhow, back to our story…
The kid is gone, and the atmosphere is a little tense, so the shot special is called, and then I hit the music and lights. Music choice played a big part in my tactics. So, obviously, we play “Have a Drink On Me” by AC/DC as an opener announcement. We are starting to have the desired effect, but still need to get it back to party time, and especially to get the Sons mind off of mayhem… so what to do…
It then hit me, and I am at once overjoyed and deeply saddened by the fact that smart phones and YouTube didn’t exist then. What happened next is one of the favorite memories of my bouncing career. As the guitar fades away from the speakers, I cued up the next song, a 180 degree turn from the driving hard rock from Down Under. Out of the speakers start horns and synthesizers. This is one of the clearest examples I can give of a pattern interruption, breaking the mind of the target audience, and installing a new program that works better, or in your favor. And this was more than successful. For out of the sound system starts blaring disco from the ‘70’s, more specifically, The Village People. By the end of a 3 minute song, we had the entire bar, including the Sons of Silence dancing around, standing on tables, girls on the bar, all doing the Y.M.C.A… it was beautiful.

Now, for the breakdown of why this worked.
I had established a trust relationship with the Sons, and all the clubbers that came in. They knew they could come to me, and I would deal with things for them. I also knew that the repercussions were real, and I needed to deal with this quickly. Trust goes both ways.

I picked the ladies to talk to the young guy, instead of myself. The reason for this was, I would be taken as a threat, and would probably ended up having to fight all of them. This would not have been a desirable outcome for the reasons stated above, police, breaking of the atmosphere, injuries…
So, by having the female staff, who knew what they were doing, talk to him, and get him to leave, we avoided that trigger.

By calling the shot special, we got all of the patrons out of the fear and stress mindset, and started them back to a party and fun outlook.

Now, the music choice. AC/DC is a goto for rougher bars, and I played it to let the aggression be put to a positive experience, and start the vibe changing.

Then, I flipped everything on its head by the second song. Choosing a song that doesn’t go with the genre causes a pause in the mind. By playing a fun, group action song, we got everyone out of their own heads and into a group mind, with the intention of partying, and not murdering.
When you throw in the spotlights, flashing strobes, extra loud volume, dancing girls, and verbal coercion to fun, you turn it into a tribal experience, and set up an inclusive, we’re all one let’s have fun dynamic. It sets up a situation where anyone who would violate the space we made would be an obvious dick. Clearly, you have to keep an eye out for this, and have a contingency in place to deal with it, but honestly, the majority of people want to be included, and not left out.

Hopefully you can see not just the specifics of this example, but the principles behind it, the things that made the specifics work. You can use these as a guide to see if your de-escalation hits on these main points, while maintaining the adaptability and flexibility to match it to your own situation or training.

Unfortunately, sometimes it all turns to crap, despite you following all of the points and strategies, and like I said, you must be willing to show this. Nobody will negotiate when they are sure there will be no consequences, and you will need to be able to communicate your ability to deal with it in an unpleasant manner in addition to the verbal, mental strategies, but in the vast majority of the time, people will take the non-violent path, as there is an innate understanding that violence hurts on multiple levels, and should be avoided as often as possible.
Remember, have fun.