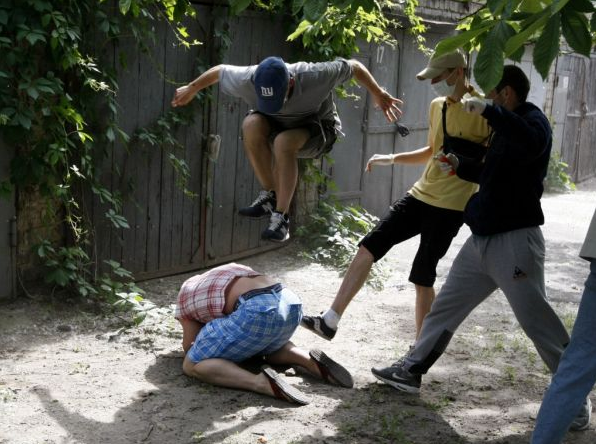 I was lucky enough to finish school with a full academic bursary. I could basically pick any tertiary institution in our country and enroll for any graduate course that my final marks allowed for. Long story short I proceeded to enroll in Tswhane University of Technology in Pretoria, South Africa. It was part of their first year student culture – especially if you stayed in one of the University’s hostels – to undergo a lengthy hazing process. This included not being able to leave the hostel for any social reason until a bit later in the year.

This anecdote plays off on the very first night I was allowed off campus with my senior hostel members. I was 18 years old. Comfortable with getting in trouble, but still very naive about violence and especially predators as I grew up in quite a small and relaxed town on our country’s north coast.

As we left one of the clubs I saw a group of guys approaching one of our seniors. One of that group’s members initiated a dumbass argument with him and subsequently it turned into a fight. My senior was quite a big boy and I thought him able to handle himself in most situations.

As the two of them were going at it (now on the floor) one of the other group’s guys moved to jump in on my senior. I judge he was about 15 – 20 years older than me, smaller but with a lean and capable look to him. Still, I was confident in myself. I put my hand out against his chest and told him to leave the two of them to sort it out. He looked at me with a huge smile on his face, gave me a playful tap on the shoulder and said something like, “yeah buddy, you know what, you’re right, let’s leave them.”

As I turned back to the two guys on the floor that dirty old bastard hit me as hard as he could behind the head. I immediately retaliated but I effectively had my ass handed to me for the following five minutes.

So what can we learn about conflict management from this episode? Quite a bit actually but let’s try and glean three important insights. Let’s break it down into where I went wrong, or, to link back to the article title, let’s look at how to get your ass kicked in any conflict situation:

1. Assuming your opponent is playing by your rules.
I got into a lot of fights and trouble growing up in my hometown. However, most of these were cases of me getting into trouble individually. Even in terms of physical fights it was almost always a one on one situation. I can remember ONLY ONE occasion in my first 18 years which was a serious group effort, but that’s it. So basically I was molded into this idea of guys sorting each other out one on one. Then I took that assumption into the big city and projected it onto my opponent. Ha ha ha, as you saw, big mistake! (But good lesson.)

This dynamic can only be solved with one of two tactics. First, is to try and understand who you’re dealing with. What type of animal are you in the cage or about to get into the cage with. As seen above however these lessons mostly come through experience. However, regardless of what type of conflict situation you’re in – whether relational argument, marriage issue, business deal, legal matter or physical fight – understanding what makes the other party tick gives you an immense advantage in successfully resolving or prevailing in the conflict. The second tactic, and this is especially relevant when there is no time, basis or need for a proper character evaluation, is to just go at your opponent as if they are the worst, dirtiest and hardest opponent you’ll ever face. Get in, get the job done, get out. All business.

The sneaky old street fighter immediately made an accurate judgement on me based on my request to let them sort it out one on one. He then used this accurate judgment against me by playing into my naivety and disarming me with his big smile, friendly tap on the shoulder and agreeing words. Clever guy. 😉

2. Giving away initiative.
I saw the dirty old streetfighter go in long before he saw me. He had initiative on my senior but I had initiative on him. I essentially gave this superior position away by using the wrong tactics ie. I should have just climbed into him. However, this was not possible due to the wrong assumptions I held about him.

One of the best advantages of having and maintaining initiative is that it creates different types of stress for your opponent. One of these types of stress that I personally have a lot of love for is disorientation. As your opponent has to constantly deal with new incoming stimulus (whether verbal judo, physical attack or even revealing new information) it becomes a struggle for him to orient and compose himself to the situation. Still dealing with stimulus A and then suddenly being hit by stimulus B becomes highly taxing on his resources – and eventually he starts to fall behind.

3. Losing heart.
A couple of minutes into the fight he spear tackled me onto a car’s bonnet. I was quite desperate by this stage and still playing catchup. I lifted myself up, went into a controlled fall and drove my elbow down as hard as I could aiming for the back of his neck. I really put a lot of effort into that strike. I missed though. Immediately after this effort he straightened out and stood up. I gave him quite a solid right cross in the face. Then he chuckled at me and said “you’re hitting me but I’m not feeling anything.”

I have to be honest but at this stage I stopped fighting and started retreating. Missing that critical strike (remember I was playing catchup and desperately needed something to regain initiative) and hearing those words completely broke my will. I lost confidence started to seriously doubt whether I was going to survive this encounter without serious injury. I started playing a defensive game and he just kept on coming at me. Suffice it to say, to this day I have never had a worse beating than on that night.

After this beating I learned a lot about causing others to lose heart. I have used the tactic to gain the upper hand in many conflict situations. But here’s a secret – sometimes I was the one about to lose heart and then I used the tactic as a last ditch effort to gain or keep my advantage in the conflict. Ie, just before I felt I’m going to throw in the towel I made an effective last play at intimidation, power projection etc. and it worked.

Which begs the question: What is the chance that ol’ streetfighter was about to quit himself? The possibility is there (ha ha ha, however I don’t think it was with him) but in reality I’ll never know. What if I didn’t give up and kept on fighting? Was I possibly one step away from regaining the upper hand and then I gave up? I’ll never know.

But on the other hand, maybe I did keep on going and I got killed. And I guess that’s the problem with conflict. We need to be sure why we’re getting involved in the first place. It’s only when we understand the stakes that we can decide on our commitment.