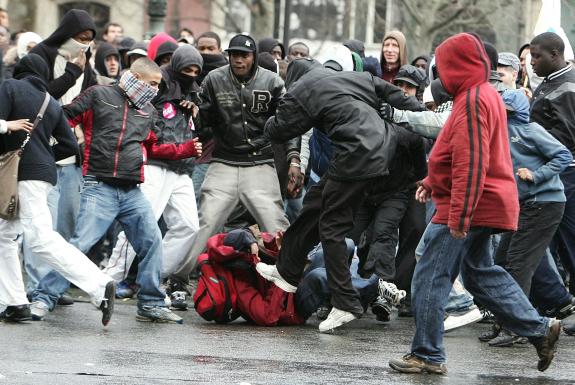 “You weren’t there man, you don’t know!”

A key consideration in reality-based self-protection is ensuring that any action we may take in protecting ourselves or others is both lawful and ethical. Others have written extensively on these points, so I won’t discuss them in detail here. A further factor which is less well covered by the existing literature is the moral aspect of the use of force, encompassing not only how other people may perceive our actions as being morally justifiable, but also how people may judge and come to terms with their own force decisions and their consequences.

As martial artists and self-protection practitioners, we have all made the decision (consciously or unconsciously) that there are circumstances in which the use of violence is legitimate, both legally and ethically. Wider society, however, often takes a different view. Politics and the media consistently put forward the message that violence is never acceptable, even that it is evil. We may come up against this clash of moral perspectives, particularly after an incident in which we may have harmed another person in self-defence. For example, we may believe that our actions were perfectly justified in the circumstances but find that family and friends are not supportive, or we may look back on our own actions and wonder whether we actually did the right thing at the time. People who have never had any self-protection training yet successfully use violence to protect themselves may have trouble coming to terms with their own actions, and we may become involved (professionally or informally) in helping someone resolve conflicting feelings about the morality of their own actions.

How an action is judged as “right” or “wrong” – morally acceptable or unacceptable – is shaped by many different influences, including cultural norms, religious teachings, philosophies and so on. This article explores some basic psychological perspectives on morality, and offers some suggestions on how an understanding of moral psychology can help in situations such as those described above.

One of the most influential researchers in moral psychology is Laurence Kohlberg. While teaching and researching at the University of Chicago in the 1960s, and later in the 1970s and ‘80s at the University of California Los Angeles (UCLA), Kohlberg investigated how moral sensibilities develop in people from childhood through to adulthood. He identified six stages of moral development, which occur in order as a person matures:

A crucial finding of Kohlberg’s work is that only about 10-15% of the adult population reach levels 5 or 6 of this model, because these levels require an uncommon degree of abstract thinking. The obvious implication for self-protection is that if we need to explain our actions after a violent encounter, there is an 85-90% chance that the person to whom we are talking will be bound up in judgements of the social acceptability and lawfulness of our actions, and is therefore likely to judge any actions on our part which go against social norms and/or the normal standards of lawful conduct as being morally wrong (or at least morally questionable), even if such actions were necessary to preserve life or safety. This suggests that we are more likely to gain the moral support of the person to whom we are explaining our actions if our explanation appeals to their sense of social acceptability and lawfulness, rather than any over-riding considerations of protecting life and safety.

A second influential perspective on morality was put forward by Carol Gilligan, also of UCLA, in the 1970s after Kohlberg’s work was first published. Gilligan felt that Kohlberg’s work was biased towards a male view of morality, and that women’s moral reasoning was different. Gilligan developed a different model describing three levels of moral reasoning. As in Kohlberg’s model, the levels reflect increasing capability for abstract thinking.

In contrast to Kohlberg’s model, which emphasises how a person develops a sense of the “rules” of moral conduct, Gilligan’s model focusses much more on how individuals make personal judgements of what is right and wrong based on assessments of harm. Gilligan believed that men’s moral reasoning is bound by adherence to rules, whereas women’s is more flexible and personal according to the demands of the situation.

Both Kohlberg’s and Gilligan’s models have attracted extensive criticism and controversy, which is too extensive to discuss here. However, there is another important point to be drawn from them which is highly relevant to self-protection.

Kohlberg and Gilligan used very different methodologies in developing their models. Kohlberg presented the participants in his studies with short descriptions of fictional scenarios (“vignettes”) in which a character is presented with a moral dilemma and takes a particular course of action. The participants were then asked to judge whether the character’s actions were morally right or not, and explain the reasoning behind their decision. Gilligan interviewed pregnant women who were facing the decision whether or not to terminate their pregnancy. Kohlberg’s participants were making reflective judgements about a fictional person’s actions, with plenty of time to think about it, and with no personal stake in the consequences for themselves.

Gilligan’s participants were making real judgements about their own actions, under time pressure, with potentially deep and life-long consequences for themselves. This suggests that the differences between the models of moral reasoning may be due to the differences in the circumstances in which the judgement is being made, rather than differences in gender. Like Gilligan’s participants, a person who has used force in self-defence will have made a judgement under pressure, probably acting on instinct or unconscious thought, in a situation with possibly life-threatening or life-altering consequences, and acted on that judgement, whereas the person assessing their actions after the fact will be making a judgement more like those of Kohlberg’s participants – with the benefit of conscious analysis, hindsight and time to reflect, and with no personal stake in the outcome.

This crucial difference between the moral perspectives of a person who has taken action and a person assessing that action after the fact has implications for articulation strategy, and for resolving moral conflicts following the use of force. The person who has acted may judge their own actions in a way which reflects Gilligan’s model – based on survival and minimisation of harm – whereas the person assessing the actions after the fact may make their judgements more according to Kohlberg’s model, likely to be bound up in social convention and the letter of the law.

Kohlberg’s and Gilligan’s models attempt to describe how people make moral judgements in the general sense. Other research has focussed on how people make moral judgements specifically about the use of violence. Again, in the early 1970s, Seymour Feshbach, also of UCLA, found that although people generally consider violence to be morally wrong, the strength of that belief varies according to the purpose for which violence is used. Participants in Feshbach’s studies felt that violence was more morally acceptable if it was used for a legitimate purpose – for example, police shooting dead an armed offender who presents an immediate danger to the public was felt to be more morally acceptable than a parent slapping a child to correct their behaviour. Several studies have explored this further, including a study by Craig Anderson and colleagues of Iowa State University in the mid-2000s.

Anderson’s study used a questionnaire to measure participants’ moral approval or disapproval of four types of violence, namely warfare, penal code violence (i.e. violence used in the course of apprehending, managing and punishing criminals), corporal punishment of children, and domestic violence. The study found that all four types of violence were judged to be morally unacceptable, but there was a large difference in the degree of unacceptability between the types of violence. Corporal punishment of children and intimate partner violence were judged to be extremely morally unacceptable, attitudes towards warfare were disapproving but to a much lesser extent, and attitudes towards penal code violence were only just disapproving – almost neutral. This suggests that, although many people will say that they disapprove of all kinds of violence, people have an underlying sense that violence is more morally acceptable (or less morally unacceptable) if it is used against people who “deserve it” – e.g. the enemy in war, or people who have already committed criminal acts – and much less morally acceptable if it is used against the innocent, or people who can’t defend themselves.

In summary, the implications of the research described above suggest that, when practising articulation after the event (e.g. in scenario training) with the intention of obtaining the support of the person listening at a moral level, we need to consider the following points:

This is a lot to remember under the pressure of a real-life situation, so it is of course important to emphasise articulation / debriefing in scenario training in order to develop the necessary experience.

Understanding the difference between moral perspectives from within the situation at the time and outside the situation after the event can also be helpful to anyone involved in counselling (professionally or informally) survivors of violence, or resolving the psychological aftermath of an encounter in which they themselves have been involved. In these situations, it is important to emphasise that:

In a liberal society in which many perspectives on what is right and wrong co-exist, talking about morality can often be awkward. It is much easier to focus on whether any actions we may take in defence of ourselves or others are lawful, since the law is unambiguous. Ensuring our actions are lawful might keep us out of jail, but whether we can rest with a clear conscience and retain the support of loved ones and our wider community depends on how we and others perceive the morality of our actions. Developing an understanding of the psychological basis of moral sense in ourselves and others, the difference in moral perspectives from within and outside a situation, and the dynamics of moral views of violence should help to give us the best possible chance of doing that.

James Hall is an instructor in applied Karate with Genjitsu Karate Kai (http://www.genjitsu.co.uk), is ranked 4th Dan (Karate) with the British Combat Association and holds Foundation level certification in Iain Abernethy Bunkai-Jutsu. James also holds a Graduate Diploma in Psychology from Aston University, UK. James can be contacted via e-mail at hall.jp@gmail.com or via Facebook: https://www.facebook.com/james.hall.902819

This article is copyright James Hall, 2016. This article may be shared and re-printed without explicit permission for non-commercial use only. Please contact the author for any enquiries regarding commercial publication.