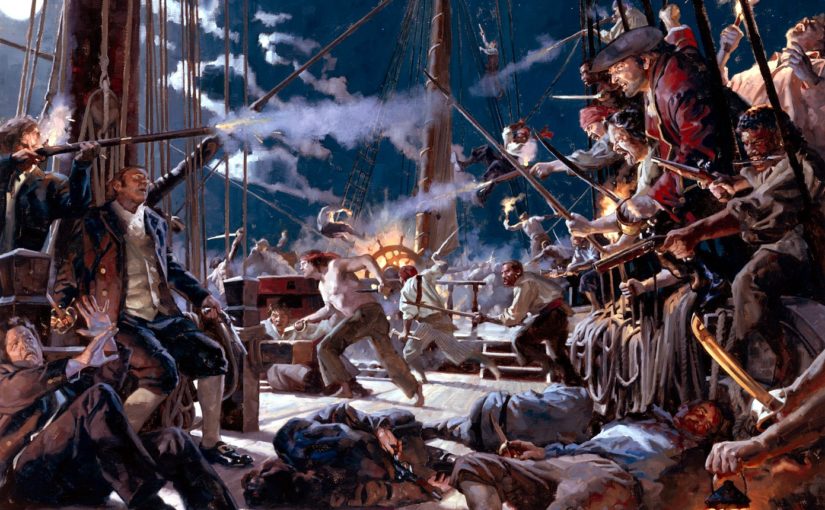 Today a wee bit of history from the days of Fighting Sail and then we wade into how we might learn a thing or two from these 18th & 19th century sailors.

Picture if you will a wooden sea vessel, make it a swift sailing sloop or a heavily armed man-of-war or whatever vessel floats your boat. Conjure up images of the ships seen in any of the Pirates of the Caribbean flicks or, better yet, Master and Commander.

Ok, got those images in mind?

When any such ship was engaged in maritime battle with another they would often draw themselves broadsides to allow cannons loaded with a variety of mayhem to do damage to the ship itself (below decks firing to sink the ship and above decks firing if you intended on capturing the vessel). At this point of the battle the ships are engaging in open quarters fighting.

If/when a boarding by an enemy vessel seemed inevitable, the vessel that feared boarding would close a series of doors/shutters that ran along beams or supports bridging the superstructures—the crew would retreat behind these barriers which were called, yeah, you guessed it—closed quarters.

Now, just because the quarters have been closed we are not at actual hand-to-hand closed quarter fighting yet as we commonly envision it. There are a series of loopholes (small openings) for musket and small arms fire.

If/when the marauding vessel’s crew is finally able to board and breech the closed quarters barrier the one-on-one melee began with combatants wielding boarding axes, pistols, cutlasses, dirks, and perhaps here and there a musket or blunderbuss.

The point of today’s little historical aside is twofold—

One-To illuminate the origins of the phrase closed quarters and…

Two—Most importantly to allow the historical use of the closed quarters strategy to inform our modern self-protection thinking.

99.9% of the time (fake but representative number all the same) when talk is made of real-world self-protection or street-defense we move directly to an assumption that the predator has breached our closed quarters status.

Yes, I am aware that we do not walk along this earth with doors and shutters ready to be closed when we first spot trouble on the horizon but…we do, more often than not, spot a bit of trouble before it actually reaches us where we must engage in what we now call closed quarters battle.

This earlier awareness can be thought of as the beginning of our open quarters status. It is at open quarters that we must assess whether the enemy is too heavily gunned to engage and thus we must set sail, or whether to pull broadsides and begin firing with cannonade. This is the nautical equivalent of fight or flight.

Open quarters weaponry, in the modern sense should always err on the side of flight, but…but we must never assume flight is always an option. There are times when flight is simply not possible and engagement must be made. But even in these circumstances modern self-protection trainees must alter how we think of our open quarters weaponry.

We cannot and do not have the option (in most cases) of leaping immediately to our own personal cannonade (in my case a .357 Magnum) nor should this be our first thoughts in what is still an open quarters situation.

We must defer to our prevention, our awareness, our decision to remain vigilant no matter how calm the personal seas may seem. In most situations this persistent scouting for an enemy flag on the horizon will serve us with all the self-protection skills we’ll ever need.

If our vigilance does lag, if we are blind-sided, if even after spotting a threat we may sometimes find our initial flight options sparse to none we then begin open quarters tactics, this can be your own personal cannonade (if warranted of course) whether this be personal firearm, blade, designated weapon or X-Weapon use as defined in our X-Weapon Self-Protection Unit.

It seems to me that we spend more time in this modern era pondering and training closed quarters tactics than we do open quarters work. We use No Second Chance Book of Drills to rectify this strategic inversion and return the primacy of open quarters battle to the top of the self-protection food chain where it should be.