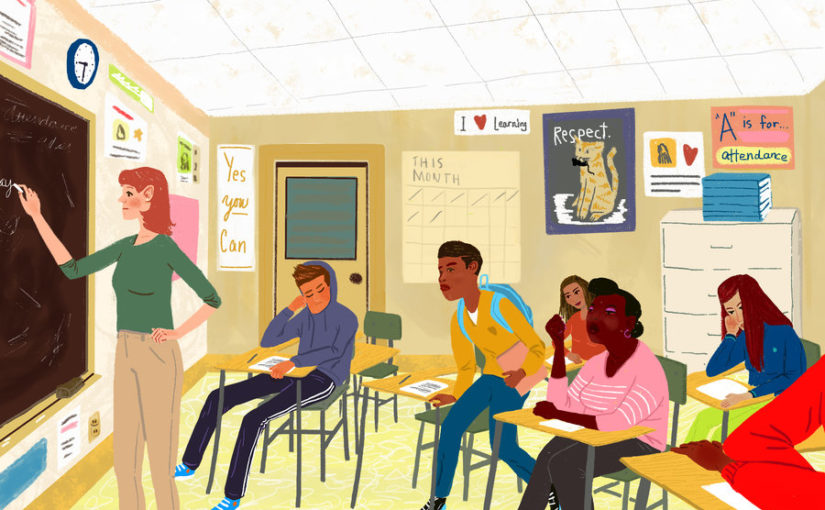 This year at my son’s school has been problematic to say the least. Both his teacher and the administration have shown themselves to be old dogs, mired in bureaucracy. Things had been going well, but at the end of last year a new super intendant of schools was installed and his first move was to change everything, including many things that seemed to be working. One semester of inconsistency and lack of focus on the kids and my son’s longstanding A/B average has dropped fully to a C. He is acting out, disregarding authority and rushing through work – all behaviors that had vastly improved and which we thought were behind us. The details here are not important. I do not think I know better than others and prefer to let people do their jobs. But I know my son, and I know his work ethic. And I know it has changed drastically in tandem with the new administration.

At the beginning of the year, I met with the new teacher. She smiled. She loved children. She assured me she had my son’s number and all would be well. I know myself. I am quick to judge. I have to remind myself to be forgiving. I wish it weren’t this way, but it is. My first reaction is often to go in for the kill. To stop the bleeding before it starts. So my Neocortex steps in and convinces me to take a step back. I do, I try to have a little faith in people, to give them a chance.

It really doesn’t help when after I’ve calmed my inner monster to make way for the nicer, fluffier me, people disappoint me anyway.

At one point, we called a meeting with the teacher and the administration and went over the specific issues we were having. The teacher admitted to being unfair to my son and did so in front of her peers and the principal. My husband and I were so impressed by this we wrote her a letter thanking her for taking responsibility and showing such character. We left the meeting feeling we had reached the core problem and solved it. Instead, this teacher went straight from being unfair to my son and calling him out on every little childish indiscretion, to allowing him to get away with everything. New problem. So we asked ourselves: is she clueless, or is she actively playing the system? Is she simply doing whatever it takes to keep us off her back rather than helping children succeed?

And so it went, numerous correspondences with the administration. The word document I created from the emails is twenty pages long. Each email reply is the same, “We have met with teacher, we have addressed the issues and feel everything is back on track. Have a nice day.” The word ‘nice’ has so many meanings.

Whether someone is deceptive, untrustworthy or otherwise damaging on purpose or due to laziness or ignorance is for the most part irrelevant. The damage is still done. Some people use charm or niceness on purpose, most don’t. It is simply a habit that has persisted due to its efficiency. We are conditioned to expect bad behavior to be obvious. But, low level predators, victimizers and troublemakers (and bureaucrats!) live under the radar. They keep you off-balance but never push so hard that you push back. This kind of behavior is so much more complex and certainly more prevalent than most of the behaviors you will learn to guard against in a self defense class. As a general rule you are probably unlikely to be mugged several times a week.

I could of course have listened to my instincts early on as Gavin to Becker tells us to do and demanded a change of class without giving the teacher a chance at all. I could have, in other words, listened to the overwhelming voices in my head that said this teacher is steeped in old habits and just telling you what you want to hear – that, in effect, all my concerns were justified. For that, there likely would have been ramifications. For instance, in demanding a class change once classes were solidified on the books and teachers and children matched (more effectively than in our case one would hope) it would have raised hackles. It likely would have been more difficult to request help the next time since the alarm had already been raised. I would have given away my element of surprise – the fact that I am willing to fight if it comes to that.

So I held back in favor of diplomacy.

I could have, at any point, called an advocate or the State Department of Education and had someone intervene. An advocate would force the school to change my son’s class or address the issues in some other way. This too would have raised hackles and caused a closing of ranks against my family. In short it would have been a declaration of war. And my son still has a few more years at this school unless I want to home-school him.

At any point I could have confronted the teacher, told her “I had HER number,” and I wasn’t going to let my son fail socially and academically without a fight. But what would that have accomplished. If I scared her it would make it difficult for her to do her job. More likely it would challenge her, piss her off and cause more problems.

Life is so much more complex than a good old-fashioned brawl.

Or I could wait and see – and put in the time. A lot of time. I could do the best job possible of working regularly and diligently with the school and with my son to make things work. This is the path I chose since this will likely be my son’s school system in the coming years. It is not ideal, we are in a holding pattern. I’m spending hours a day negotiating, writing letters, having meetings and tutoring my son (this, in addition to the usual daily grind). Now we wait for the next report card to tell us if any of it is working.

Ultimately none of this is about anything so fanciful as making a right or wrong choice. It’s about spotting problematic behavior as early as possible, making strategic choices and changing course, even multiple times, if the situation calls for it. It’s also about living with the fact that there is no perfect choice – no building theme music to herald the culmination of a long journey. And hindsight and second-guessing are futile and distracting. There’s often in reality, no way to know if you did the “right thing” or even “the best thing”.

In this case, I’m feeling a bit stupid. Even with years of training, I was blindsided by niceness. We often are. It’s such an excellent tool. It takes us by surprise. Who wants to punch the nice guy. Who wants to look like a bully and turn others against their cause. So often the preemptive strike can backfire.

So I continue to recalibrate. I have my eye on next year and hope to be well ahead of the game. The teaching staff next year is not stellar, I am told, and that is a formidable obstacle. But, there is still time and I am on it. We are creating allies and setting up the groundwork for a more successful year. It takes time and patience. Two words I’m not always fond of.

Strategizing – mental self defense – is underrated and underexplored. The issue at hand is how to spot low-level predators, victimizers and trouble makers as early as possible; to give name to the benchmarks of predatory niceness and create some sort of vetting system. Many date rapes happen this way – creeping niceness that builds trust.

It’s all well and good to talk about heeding your instincts and criminal ploys to watch for. But, what happens when someone says all the right things, always apologizes, smiles and never does anything obvious enough to point to. What happens when it’s not a matter of life and death, just quality of life and sanity. Or your child’s educational future.