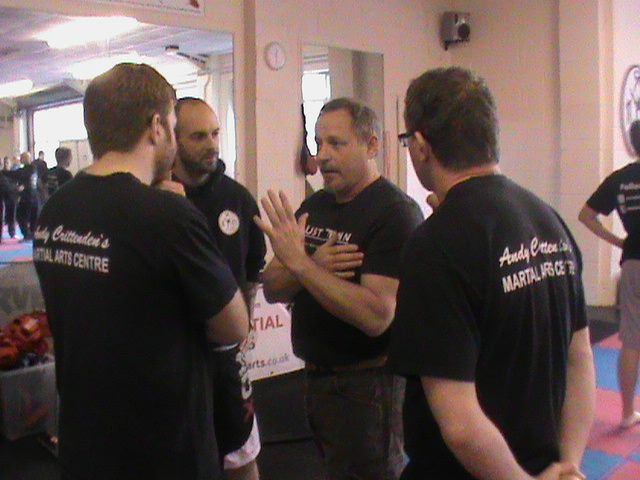 I have heard, since the very beginning of my martial arts career, that there are a very small number of principles on which everything else is based. It always sounded good, until I asked exactly what those principles were. Usually I got a blank look or a fragment of philosophy: “Hit hard!” or, “Him down now!”

What is a principle? A principle is a law of physics or a property of physiology that makes your techniques work. As such, they are universal and apply to all styles and systems. Leverage, for example, is a universal principle. I personally identify something as a principle if:

It applies to striking, grappling and weapons

Leverage, for instance. In a sweep, the greater the distance between the high and low force, the less energy is required. Every lock has a lever arm that should be maximized. And sticks hit harder than hands because the lever arm is longer. And no exceptions. Perfect leverage won’t always get the job done– it would take a truly enormous lever and an impossible place to stand to move the world– but good leverage is always superior to poor leverage.

This articles is going to get a little interactive, so go grab a pen and some scratch paper. I’d like you to sit and think and write down a list of your principles before we go further. I’ll ask Garry to insert an advertisement about here so that you don’t scroll down too fast.

Got your list? Good. Now let’s talk about what isn’t a principle. You’ll probably wind up scratching some things off your list, and that’s fine. Because something isn’t a principle by my definition, doesn’t mean it isn’t important.

Things that aren’t principles, but show up on a bunch of lists are goals, strategies, tactics, techniques, concepts, and aphorisms.

“Don’t get hurt” for instance, is a goal. It isn’t a principle. Getting injured makes everything harder, so not getting hurt is a good goal, but it isn’t even a plan. It is the result of doing everything right and a lot of luck. Where you want to end up is a goal, but it doesn’t help you get there, so it isn’t a principle. It isn’t even a strategy or a tactic.

“Do damage” Is a strategy. It is the vague path to your goal. Again, desiring to do damage does not increase the efficiency of the damage dealing itself, so not a principle.

Counter-punching is a tactic. It can serve your goals and implement your strategy, but it doesn’t make things work better. Rather, it is one of the things you use principles to make better.

“Use the appropriate level of force for the situation” is a concept. It is a way to think that can be very important and can inform every aspect of training as well as fighting, but it is not a principle. Nothing in that statement makes the level you decide to use more efficient.

Note here that aphorisms will be one of the clues to discovering your principles. Dig in deep and find what the underlying truth is.

Another thing to note: Training trivia, like, “You must turn your foot at 45 degrees in this technique” is almost always a clue to a principle. When a principle is not taught or not understood, trivia must be memorized to fill the gap. Once the principle is understood, the trivia becomes unnecessary because the reason becomes obvious. And the principle will also show the boundary when the situation changes and the trivia becomes untrue and ineffective.

Good? So power down the screen, pour yourself a cup of coffee or whatever, and take another stab at writing your list of principles. I will share mine at the end of this article, but it is imperative that you write yours first. Humans, like all animals are lazy. If you see a good enough list, part of your brain will turn off. If you see my list before you write yours, you will either turn off or, at best, your list will be polluted with my ideas. If, however, you see my list with a strong and complete list of your own, the ideas can cross-pollinate and become stronger. Don’t cheat yourself on this.

There aren’t a large number of principles. I think if my understanding were deeper, the list above would be shorter, not longer. A future article will talk about how to apply the concepts to training. For now, it’s important that you have your list.

Fighting is complex, but it’s not complicated. Here’s what I mean. There’s a lot that goes into it– physics, physiology, social constructs, internal states of all parties involved– but the effective solutions tend to be simple. Physics in school can be hard and take a lot of math, but in the end there are only six simple machines and almost all work from variations of one principle, leverage.

And that’s why, as simple as training through principles can be, as quickly as students can make gains, it can still be a life long study. There is incredible depth available at this game. When I first learned of structure, it was simply a tool to keep energy from being lost. “All of your joints and muscles give,” I was told, “and when they give, that power is not going into the enemy. So hit with bone, not with muscle.” Like most young men, I couldn’t even tell structure from stiffness at that time.

Fast forward thirty years and in a short introduction to structure we still covered power conservation. But also power, unbalancing, bone slaving, void defense, vectors along bones versus angled against, structure disruption, resting in grappling, and structuring against a lock. All just structure.

And as cool as all that is, I know I’m barely scratching the surface.