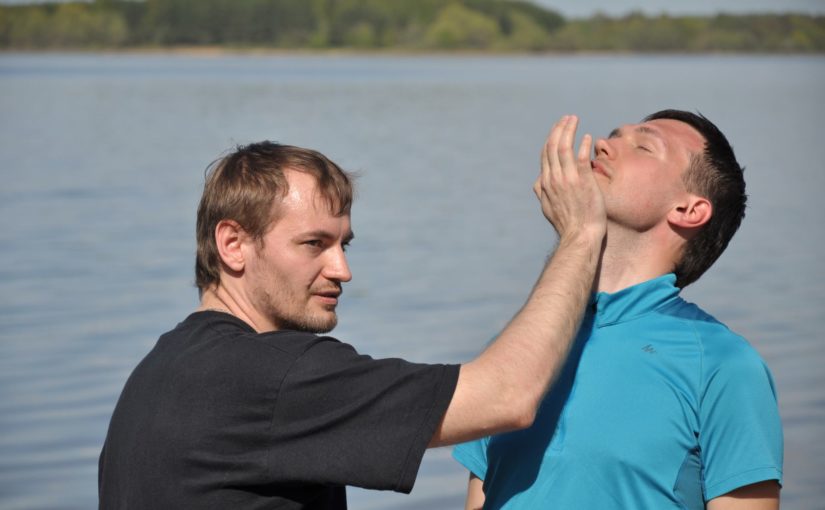 Whilst it all depends on a situation Russian chavs (white trash) are very aggressive, but they are usually bluffing. When encountering a really tough guy they will usually back off once they realise they have bitten off more than they can chew. They differ from real gangsters who are serious people – chavs are not wolves, they are jackals. At the same time they are the most frequent opponent the person in the street will come up against.

They are like an Bollywood movie fight – a lot of blah-blah-blah, and minimum of action. Chavs try to impress you telling you scary stories about themselves and trying to look cool, it is certainly a case of style above substance and the style is debatable too. They want to suppress you, to break your spirit, thus winning without a fight. However, most of it just an imitation.

When dealing with them it is important to stay cold-blooded and don’t listen to their bedtime stories, which would make Martin Scorsese envious, most of them are just hoodlums, street punks, so if you beat them it wouldn’t have any consequences as long as you do not get caught that is but let’s try to avoid that. Strangely though, were you to take ‘direct action’ they would just respect you, because you proved yourself, stood your ground, such is the world of the chav. But you never know – some of these bad boys can go to a police station and snitch, trying to squeeze some cash from you, it is never all over until it is over as they say.

According to their pseudo-criminal mentality, Russian chavs cannot beat or rob you right away. Usually they need a formal reason to do, they will try to set you up and reel you in like a fish. For example, you talk the wrong way and they just want to have a little ‘compensation’, you have failed to show them respect and need to pay the fine for this crime, once they ‘explain’ the error of your ways and you are frightened enough you give them your watches or purse by your own hands, in their minds this is then a gift from you to them, not a robbery. They think that would make them more innocent if questioned  by the police and even in the court, because you gave it of your own free will!!

Knowing how they operate, like jackals, is the good news because when you understand the situation goes like this, you have some time to make a decision – to fight, to counter-bluff, to run or something else. Whilst the urge to give them a beating may be strong most of Russians are not that cruel and you can turn a conflict into a handshaking conversation. Just tell them that you respect Russia, and you respect your opponents, you know their game and see the funny side (even if there is not one). Maybe they would invite you to drink with them and you would become ‘best friends’ in a minute, remember Vodka is a great equaliser. Treat them as equals and don’t show your fear. Bluff works for you too.

While an average tourist will not come into much contact with our Russian chavs, they are best avoided with a polite ‘spasibo ne nado’ (thanks I don’t need it) as they can easily switch to your friend to your enemy, a chav can put on the friendly approach, but when you shake hands, he would grab your hand starting to punch you with another fist, most likely with assistance from his sidekicks. So don’t let them to touch you, especially not to embrace, to put their hand on your shoulder, because you cannot control distance in this way, and if they start fight you cannot move or run away. Be calm and careful and don’t relax until your opponents disappeared around the corner, then you can change your diapers.

When you encounter a Russian person in a street conflict, forget all that tolerant pacifistic stuff. Unfortunately, due to GULAG and anarchy in 90-ies after the collapse of the Soviet Union, most of Russians follow the pseudo-criminal codes of behavior and they have the corresponding mentality. Only two variants are possible: 1. A victim 2. A predator. If you prove you are a predator, it’s OK. It is not necessary to fight, just show you have guts and the intenton to follow it through.

Of course, it depends again and a Russian chess or a violin player is not like that, but we are not talking about average people, poverty has created an underclass here and they need to feed off somebody, like a jackal they choose the easiest mark. Also, remember that these chavs can be in their 30’s or 40’s, but they are still behave on a teenager bullies level, their lack of sophistication both a strength and a weakness for them.

Due to this criminal mentality Russian people always have to be alert, they don’t feel safe and tourists to Russia need to be on their guard too if they stray into the wrong areas. Often ordinary Russian people may seem to be unfriendly and unsmiling but they are warm people once you get to know them, it is just an inbuilt defence system learned over many generations and helps prevent becoming the  victim of any occasional chav. In the Russian society, one cannot show weakness, anywhere, in a street or in an office.

So if you come to Russia, and please do, but you meet a Russian chav, stand your ground, treat them as equals and remember they can easily turn to be your friends from your enemies and drink some vodka together, PRIVET!! (Cheers).