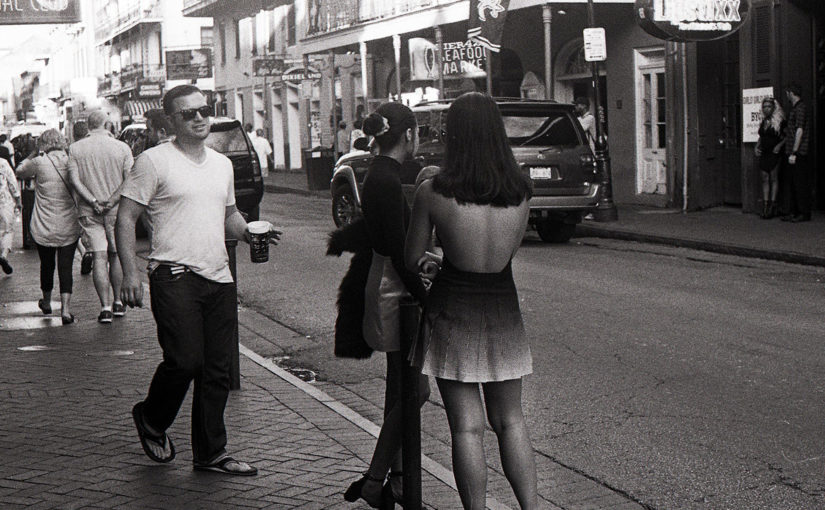 Rory Writes: This was just going to be an example for the last article on reframing, but it grew into an article of it’s own.

One aspect of self-defense that is rarely addressed are low level predators and creeping victimizations. The low-level predators are the ones who keep their victims uncomfortable, but never cross the line into overt, concrete, actionable behaviors. The constant innuendos that never rise to the level of sexual harassment. The colleague who seems to enjoy violating personal space but doesn’t touch, or touches but only “accidentally” and deniably.

Creeping victimization ranges from the charming predator who romances a lonely victim, slowly acquiring access to the victim’s car and house and bank account. They victim may never even believe it was fraud. Or the cult that asks for one tiny favor until it seems normal and ups the level of the favor until a member is living with people he or she was assigned to live with, signing over their paychecks to the cult and getting an allowance…and it happened so gradually it seems normal. See Campfire Tales From Hell Create Space (2012)

Passive beginning: “There you are, minding your own business and suddenly the office creep is standing right behind you, setting it up so that you touch him when you turn…”

Reactionary mode: “… so what should you do?” Passive/reactionary puts the bad guy in control. He has the power, he calls the shots, and you are constantly playing catch-up when he is acting, and you are prey to be studied the rest of the time. There is no agency in this.

Simple solutions. “Set clear boundaries.” Excellent advice, but this happens in the real world. When you do set clear boundaries, when you are assertive, there will be a price to pay. Bad guys are very good at punishing good guys for taking a stand. Maybe starting a gossip campaign at work, or using social media to try to get you fired or counter-accusations that you are the one being aggressive.

The self-defense mindset is inefficient for complex problems. For that matter, it’s not that efficient even fro self-defense situations. In the real world, most attacks have antecedents and will have after-effects, win or lose. They happen in a complex world of social interaction ranging from the reaction of your friends to the response of law enforcement. And passive beginnings or reactive timing makes it very difficult to recover and succeed.

The conflict management mindset, on the other hand takes advantage of each aspect.

An active mindset and an active beginning. You are part of this game from before the start. Dealing with low level creepers in the office you learn who they are and how they operate. You create your support system and gather allies from the beginning. In the self-defense mindset you call the police after the fact. In the conflict management mindset, you have been making friendships and alliances from day one and realize that those friendships are part of the world that the creeper must navigate.

Even dealing with the very rare stranger attack, the conflict manager trains beforehand, not out of fear but because life is better when you are stronger and more skilled. You are alert beforehand not out of paranoia but because people are interesting to watch.

In the creeper scenario this is the ability to choose to see the relationship as something other than low-level predator vs. toy. You might also be co-workers. Have a network of friends or business relationships in common. You can even close to be the predator in the relationship.

I hesitate to write that. The simple fact is that your mind and how you see a situation has immense power in how you act and how you are perceived. In the ecology of violence, the low-level creepers are the scavengers. Rats scurry away from lions. I find people are very uncomfortable experimenting with their mental power to change. They either fear they will damage their identity or that it is unnatural.

As to identity, your “self” is a wisp of smoke. Are you the same person before and after your morning coffee? After two days with our sleep? If your “self” was solid enough to be threatened, you wouldn’t have moods. You are not protecting yourself, but your ego.

Unnatural? Then why do all children play at this constantly? How much of your childhood did you spend being a great explorer or a soldier, playing cops and robbers and cowboys and indians? “Let’s pretend” is a universal game among children, and I believe that kids are forced out of it because the ability to go chameleon at that level will make them too powerful for their parents and society to predict and control.

Changing who you choose to be has immense power, if you have the courage to embrace it. Just sayin’.

In the stranger self-defense scenario, participation allows the justified pre-emptive strike. It allows and encourages you to verbally control the situation before the threat does. It gives you active protection from the threat’s use of psychological control.

Complexity. Recognizing that situations happen in an immense network of social interaction, in a physical environment that is cluttered and messy, in a complex swirl of emotion, cognition and social conditioning is a superpower. It may seem complicated, but it is only acknowledging that the level of complexity you know in every other part of your life exists here as well. This is something you deal with every day. You are good at it. Unless you let the other person set the rules of the game.

Each level of that complication is something you can use. You can use the interactions between the levels as well. When you see the world this way the victor in an encounter is rarely the strongest or the most evil. This worldview works for the creative and the smart. And you are smarter and more creative than most creepers, right?

That is why it is so critical to bad guys to keep you in the reactive, self-defense mindset. They control your mind so that you limit your own options.

In stranger self-defense, understanding complexity allows one to recognize when other resources can be used to prevent the danger, like screaming for help before the threat gets you to an isolated place. It encourages one to use verbal skills and physical skills simultaneously both to give a psychological edge over the threat and to groom witnesses. It changes that cluttered and chaotic environment from a set of hazards to a set of tools.

Passive, reactionary and simple mindsets limit your ability to respond. Embracing the complexity and your role as an active participant increases your agency. If you see the world as a fascinating complex game, you can become a master at that game.