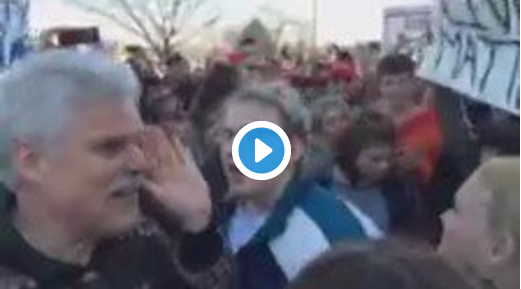 There’s a new breed of bully out there.

The best summation is he or she is a religious fanatic, but over secular not theological ideologies. Whether you call them crusades or jihads, many of these folks are on an attack campaign to spread their beliefs. These true believers are going to force others to convert to the zealot’s superior ideals, morality, beliefs, and dogmas—or be dominated by them. Theirs is a righteous cause, a new morality, a utopia of compassion, tolerance, and equality. You will conform to these ideals. I’ll show you not only how they use violence, but the threat of violence to intimidate and bully you.

Just so you know although their ‘official enemy’ are those who think differently, their favorite target are those who think like them—but are not orthodox enough. (Google the term, “struggle session.”) Just because you might share some of the same ideas doesn’t mean you won’t be bullied by these tactics.

While verbal and emotional abuse are their most common behavior committing physical violence in the name of their righteous cause isn’t off the table. But here’s a modern twist: A common tactic of these secular fanatics is to physically attack while either screaming they are ‘the victim’ or denying that they are attacking. More than that if you react to their violence—you are the bad guy.

This is a series of articles about how to handle their preferred tactics, starting with threatening you with violence. In case you don’t know, I am a U.S. court-recognized expert in violence reconstruction. In this article, I’m going to share with you part of the process I use to analyze what happened in a case—specifically the threat of and lead up to physical violence. (You’re getting tricks of the trade here, Buckaroo.)

Here’s a homework assignment: Go watch videos of violent confrontations—but with this process in place. Since this is an election year (in the U.S.), the headlines are screaming about peaceful protestors being attacked and victimized. One of my favorites is the poor innocent fifteen-year-old who was sexually assaulted and then pepper sprayed while peacefully protesting at a political rally. There are a lot of people who are really angry about this innocent child being abused this way. But is that what really what happened? We can actually check it against video. In doing so, we can practice the analysis process I’m about to show you.

Step one in this process find the longest, uncut, raw video you can of the incident itself. Often shorter versions have undergone creative editing (to support steps two and three). But also know two thirty-second videos can—through editing—emphasize different things. There’s a common ten seconds, but this one has the twenty seconds before and that one has twenty seconds after.

Going to the MSNBC Web page, the version they present of the pepper spray incident is twenty-five seconds. While the raw footage doesn’t support the allegation of sexual assault, it makes it look like the spraying came out of nowhere. (The poor innocent child!)

This is thirty seconds and focuses less on the aftermath and more on what happened before incident—like her getting in people’s faces and striking someone before being pepper sprayed.

Has thirty-second and twenty-second videos. Both with extra emphasis on the aftermath of her tearfully walking away.

When it comes to video, longer and uncut is better. But you can piece together a more overall knowledge by looking at different edits and versions. It’s like reading about the same incident from several different—and diverse—news sources. You get a better overview.

Steps two and three of the process are critical for several reasons. The biggest is because the way our brains work words and vision are closely linked in what we perceive. (That’s why TV and movies are so powerful.) This word and image combination literally creates our ‘reality.’ We are very susceptible to words influencing what we can see. I would say perception, but words ‘blind us’ to what we can see. It’s part of what is called selective attention.

Here’s a little test you can take…

(Or Google: Selective attention, basketball, video—and take the test) Go ahead, do it before you read on. G’head, g’head.

If you took that test, you’ll now understand why steps two and three are critical.

Step two is skip the headlines, taglines, titles, pundits, and reading the article before you watch the video. Go straight to the video. You want raw, unedited video before words. This is important because often these other sources—especially headlines—support the narrative they want you to believe and that the video is edited toward. That’s a very powerful combo, influencing not just what you think you saw, but your ability to later change your mind in the presence of new information. (It’s possible, but it’s hard.) The headline of the Think Progressive article spins ‘a child is sexually assaulted then further victimized’ narrative as the set up for the rest of a ‘what evil, violent, rat bastards those guys are’ article. Once that idea is planted, it’s hard to see what really happens on the video.

Step three is the must do. In fact, it’s so important, I’m going to make it a stand alone paragraph …

Watch the video for first time (or maybe the first few times) with the sound off!

The reasons for this are legion. One of which—especially in these days of cell phone videos—is often the cameraman provides a running commentary (assuming that the cameraman isn’t screaming, “Kick his ass!”) He’s telling you what you are seeing and where to look. Way too often this commentary keeps you from seeing the gorilla. (If you took the selective attention test, you’ll understand.)

Two is even without narration, the screaming, yellin,’ and bellerin’ will distract you from the physical actions of the participants. Remember, emotions are contagious. If you hear someone screaming in anger—even on video—you’re going to get excited and miss important visual details. More than that, we tend to look at the face of the person we’re listening to. So you tend to focus on the screamer’s face not the physical actions of that person or others. Again, it’s that damned gorilla you don’t notice.

Three, is mute helps prevent you from rooting for one side over the other.

Those are just some of the reasons why ‘no sound the first time’ is critical. Focus on the physical action. Do it without being emotionally invested, judgmental, or biased.

Step four is watch it again with the sound on (or read the article). I should warn you—odds are you’re going to experience cognitive dissonance.

You’ve seen the video. What we’ve done at this point is immunized ourselves from being told what we saw. (As opposed to being told what you’re about to see or are seeing.) We’ve broken that operant conditioning and selective attention trick. Way too often you’re going to read the article, comments, etc., and wonder “how the hell can someone get that version” out of what you just saw.

Using that video of the pepper spraying as the example, which version tracks better with what you saw:

1.)”After being sexually assaulted at a rally, a fifteen-year-old girl was pepper sprayed by a supporter” or…

2.) “She was aggressing against people, her friends were trying to hold her back, she punched someone and got sprayed, then she walked away.”?

We’ve seen things that cannot be unseen. We’ve kept words from establishing a bias or narrative. Then again, you’ll usually end up watching it again to try to find the basis of the words. (“She was groped.”) Where the hell is that supposed to have happened? You’ve also seen things that are going to be a whole lot harder to explain away—like her hitting someone before being sprayed. (“Well the reason she hit was she was groped.” “That’s not what I saw happen.”) More than that, you’ll be able to articulate what you did see—especially if you take the next step.

Step five—especially if you’ll be arguing with people about it (remember I deal with lawyers)—is break the video into five-second chunks and watch them a few times.

What is happening in that five-second chunk? Not what is going to happen. Look closely at what is happening. You analyze what actions and circumstances you see in that particular chunk. As you watch these chunks over and over put your attention on different things. (One time watch his right hand, next time his left. Now do the same with the other person.) Watch for what is there just as much as what is not there.

When you do this, three things happen. One, you will usually find what happened is way different than the story of what happened. If the story is true certain things will be on the video. If not, question the story. For example, that she was ‘groped’ before she was pepper sprayed. Really? You know what? There are certain common reactions a woman has when she’s groped—especially when her reaction involves hitting someone. They happen fast and without thought. Watch any of those videos for the reactions and timing you think would be there.

Two, you’ll see even more details about the situation that you didn’t see before. For example, the expression on her face combined with the body movement that indicates she was hitting someone. What’s interesting about that is we unconsciously clench our jaws when we physically attack. If we expect a counter attack (or are being attacked), we drop our jaw to protect our throats. If we don’t, we thrust our chins out as if to bite. Look at where her jaw is.

Three is how often the supposed ‘victim’ was using the threat of violence to bully, intimidate, and coerce—and it backfired. Or that the so-called ‘victim’ was physically violent first. Not defense, the person attacked first.

“Uhhhh. Wait a minute … what?” Yeah. This is a biggie. The reason I used this protest video as an example is this is exactly what happens. She was aggressing, threatening, and physically attacked first—yet she’s being presented as the victim.

(As a follow up, I’ve since seen a longer clip. One that starts earlier. She does accuse someone [“You”] of groping her. But there is a five to ten second delay before she throws the punch. This delay takes it out of the realm of immediate defensive action—self-defense— and makes it a deliberate and separate attack.)

One thought on “The Threat of Violence: That Isn’t Really a Threat …,, Part I – Marc MacYoung”