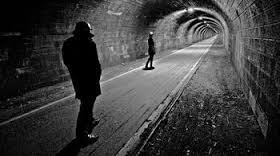 This is going to be a series. Digging into stalking is paradoxical. It is both straightforward hunting, and complexly twisted socially driven asocial behavior. It’s going to take more than one article.

Starting with the straightforward. Stalking is a robust behavioral expression of humans as apex level predators. A four-legged predator stalks the herd while determining where and when it will act on the targeted prey. If you watch a domesticated house cat stalking a bird, mouse, or bug; the body posture, pattern of movement, eye gaze are all billboard level telegraphs that scream I Am Hunting.

A stalking cat’s behavior is subtle to its prey, that’s why it works and has evolved as an innate skill set. Observing from outside of the species, the behaviors are obvious and leave no doubt about the feline’s intentions. Just as cats can stalk subtlety enough to go largely undetected by their Target, so can humans.

Humans in stalking mode don’t generally panther-crawl their way down the street behind the Target. Like cats, humans develop stalking skills adapted to their specific prey. Panther crawling through the grass would be comically obvious….the subject was apprehended while belly crawling up the walk behind the intended target, no one was more surprised than Mr. Jones in discovering he was being hunted. Onlookers were equally stunned. “We just didn’t see him coming…” Not how it would go down.

People hunt like people, not like cats. Wait. That’s not entirely true. Like cats, people stalking other people will invest significant energy to ensure they don’t get caught in the hunt. They don’t want to scare the prey before it’s time to pounce. Once pouncing commences, hunting in stealth mode no longer matters.

In human terms, this means people who stalk will blend into the environment. They will work through the social patterns and to a degree, the mores of the group. And like the mouse or bird who skitters in surprise when the cat materializes out of nowhere, so too do humans startle when they realize they have been in the cross hairs. By the time an Intended discovers s/he has been the focus of stalking, the game is deep in play. More on that in the next article.

In my experience, it isn’t just the Intended who gets startlingly disconcerted when the stalking comes to light. People listening to details of stalking situations tend to have a significant reaction as well[1]. Perhaps there is something uniquely creepy about discovering we stalk one another with the same proficiency as our four-legged friends. Maybe because stalking is such an invisible threat, the nature of it is disconcerting. Maybe, stalking is a little too theoretical because we only hear about it happening with the famous and noteworthy figures of our culture.

It’s not as uncommon as this assumption indicates if we look at statistics from the Bureau of Justice.  The BoJ stats show across any given 12-month span, 14 in every 1000 people 18 and older are the intended targets of stalking. The numbers are based on reported stalking, which means there’s a good chance the numbers are higher. Add to this, the first stalking laws didn’t go live until 1990.

The numbers aren’t accurate but they provide a soft baseline. Emphasis on soft. Part of the problem in working with Stalking from a prevention/defense perspective is how deftly stalking grows out of standard socially scripted (i.e. accepted) behaviors. This is evidenced in the substantial variation state to state regarding what is prosecutable behavior under stalking codes.

The Bureau of Justice Summary as an example:

You can fact check the stats here: https://www.bjs.gov/index.cfm?ty=tp&tid=973

This is a damned wide variable. How do you determine the difference between a hard crush, a determined suitor, and criminal stalking?  How scared are you? And what if you are terrified but the fear is based on paranoid projections and delusions? How will we know? Not everyone with clinically paranoid ideations wears a tinfoil hat.

What is the plumb line for answering the question is this stalking? Am I an Intended Target?

In here somewhere we stumble into the conversation about boundary setting and how that interplays with the advanced stage of the behavior because remember, most Intendeds (intended targets) do not know they are being stalked until the Threat has been manipulating the hunt for quite some time. Weeks, months, years.

Research into the accepted practice on advise-giving for people who believe they are being stalked follows a fairly standard set of behavioral directives when compared across a broad span of resources. What is also standard or common to these suggestions is they are advising the Intended Target once there are open indicators of the stalking dynamic. Useful information applied to a point in the timeline well past the early stages where prevention is an option.

Once you have the obvious evidence, prevention is moot. You can work to prevent deeper escalation but the time for authentic prevention and early de-escalation with effective boundary setting is past. Add into this, regardless of the point of awareness and intervention, boundaries are established in network of accepted social patterns. This raises the question: how can boundary setting be effective when the Threat’s perception of boundaries is toxically skewed, or nonexistent?

No solid answers, a few thoughts and ideas though. That’s what this, and the next two articles in this series are digging around in.

[1] These startled reactions include people experienced with violent encounters. This seems noteworthy.

One thought on “Stalking: Getting the Conversation Started – Tammy Yard McCracken”