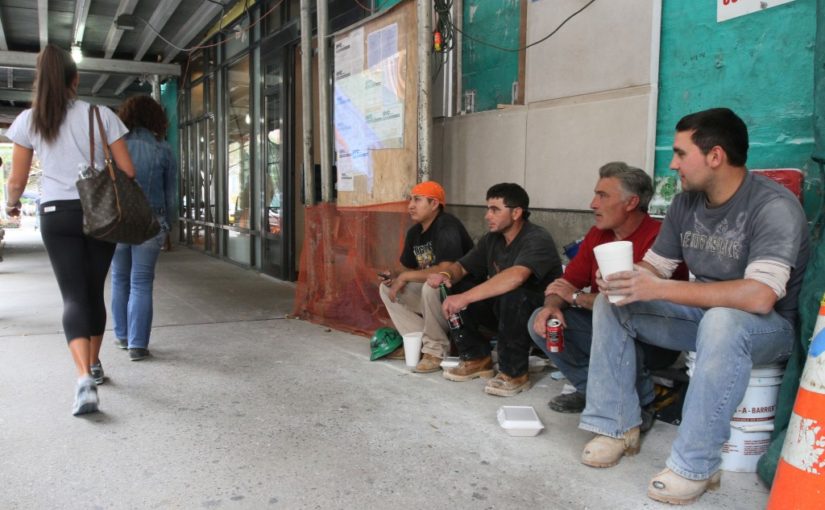 Over the years I have read and heard all sorts of advice about how to deal with street harassment. Mostly this advice was given by a wide variety of (self defense) instructors and sometimes by self-appointed experts. Sadly, only a minority of these tips were built on solid knowledge, let alone empiric evidence.

With this blog I would like to inform you about the most common form of street harassment, the dangers and the dynamics behind it and offer you some solutions. This blog is written from a Law Enforcement perspective and based on 20 years of law enforcement experience with an academic background in policing and behavioral sciences. Although the topic “street harassment” might suggest that the blog is written for women, it is actually not. Street harassment is something that both men and women are facing on a daily basis. (Loeber, 2001) Although a blog is too short to cover all the ins and outs of youth group dynamics and how to deal with it, my goal is to offer you some easy to remember, useful rules of thumb.

These percentages not only depend on where the question is asked; what is perceived as harassment in one culture may be seen as “normal street behavior” in another. It also depends on the definition of street harassment. For one person, cat calling won’t be a problem, for another, it can be very intimidating. Whatever your location, cultural background or definition of harassment is, please remember; this is your life and your body and no one else’s. Nobody has the right to touch you without your permission, nobody has the right to call you names or to judge your appearance, even when this “judging” is covered by so called compliments. You have the right to set your boundaries and the right to protect your body. How to set your boundaries is part of this blog.

The sole culpability for harassment lies with the perpetrator. It is his, and not his victim’s choice to play the game, commit the crime or to start the dynamic. However, you do have a responsibility for your own wellbeing and safety. To some extend your own behavior can influence the decision of the perpetrator to (not) attack or to harass you. (Becker, 1998) I realize that this might not be the most political correct or popular sentence in this blog, but it is, simply, the truth. At the other hand, it might feel encouraging to know that the key to your own safety is in your hands and not in someone else’s. (Beyond the Split Second; Reality Based Training in High Risk Law Enforcement Operations, 2015)

For this blog I will focus on the most common form of street harassment; “street games”, a game played by male youth groups on the streets of many  western cities and villages. This form of street harassment is a calculated and instrumental form of aggression and intimidation, which means that the perpetrator starts the game with the idea that he (or they) will be the winner in this dynamic. And that is where you’re options are…

The second pillar of youth groups:  Reputation
The second thing you have to realize is that credibility, reputation and hierarchy are strongly related and that reputation is one of the most important things for youth group members. There is something to win and something to lose for the group member in the process of intimidation. Although alcohol and/or drugs will influence ones perception of risk and weakens ones inhibition (self-control), the origin of the intimidation/cat calling/harassment is still an instrumental one: entertainment and fortifying the reputation within the group. (Bond, 1997)

Street credibility is based on the individual performance (perceived toughness by group members) and their contribution to the group. Actions like cat calling and intimidation can contribute to the perceived toughness ad therefor the status within the group. However, a failed attempt to intimidate a bystander can be disastrous for one’s status. This can lead to the need to retaliate and re-establish ones position. With a second (or third) attack as a result, often with an increased level of aggression. In other words: Think twice before you engage in the street game and “out smart” the perpetrator. And especially for the male readers of this blog: don’t let your ego stand in the way between you and your safety.
(For more information about youth groups see http://straatcontact.nl/ (Dutch))

So, by now I might have confused you. In the first half of this blog I told you that you have the right to defend yourself and the right to set boundaries. In the second half of the blog I warned you to be careful and think twice before you engage in the dynamic of street games. How do those two things add up?

The answer is: FOC it!

While walking on the street, you might encounter a youth group. By now you know they are probably bored and looking for some entertainment. You decide not to be part of that entertainment. If you have the possibility to avoid direct contact with the group without being noticed, use that possibility. You need to scan for options (basically lesson 1 in krav maga) Cross the road and walk at the other side and continue your journey. However, crucial in this case is “without being noticed”. As soon as the group has you in their sight, and they see you avoiding them, you will be perceived as an easy victim. If you can’t avoid them without being “detected”, pass them. Pass them in the same way you would pass a group of senior citizens; Friendly, Open and with Confidence.

Friendly and Open means: Engage in eye contact as you would do with any other group. If it is normal in your culture to greet people when you pass them, greet them now. If it is normal to greet people with a friendly smile, give them that smile now. No eye contact, not greeting and not smiling can be perceived as either an act of aggression or an act of fear. Both can start the entertainment/reputation dynamic you don’t want. Regarding the eye contact; make eye contact in a way that is perceived as normal within the culture you’re living in. In most cultures, avoiding eye contact is a way of submissive behavior. Engaging eye contact for too long, is a sign of dominance. Again, either positions can start the entertainment (submissive)/reputation (dominance) dynamic, which you want to avoid.

Crucial in dealing with youth groups is Confidence. The good news is that you don’t have to be confident to be perceived as confident. “Fake it until you make it”, can bring you home safely. So, while approaching the group and reminding yourself to appear “friendly and open”, walk straight up, make yourself tall, shoulders straight, breath a bit more slow and deep than usual (you’re probably a bit stressed by now and this is a good way to hide it) and walk with solid, firm steps like you’re walking straight to your destination. Maintain a healthy distance between you and the group at any time. Healthy meaning; healthy for you; don’t come so close that you’re easy to grab or to kick at. This will also help you to stay out of the group dynamic; if you come to close (or even in) the group, you’ll be a part of their territory and therefor interesting to play their games with.
(For more information about body language see https://www.youtube.com/watch?v=Ks-_Mh1QhMc )

If anybody tries to engage with you or tries to pull you in their dynamic, you respond with a friendly but confident and clear response. Something in the line of “(Sorry) Am in a hurry, no time to talk”, and you continue your walk. Whether or not you start your sentence with “sorry” depends, again, on your culture. In some situations the “sorry” will be perceived as weak, in some situations the lack of the word “sorry” might be perceived as passive-aggressive.

If they approach you in a more intimidating way, you simply say “No” or “Stop … (behavior)” in a clear and confident way. Say it and mean it, and pretend that you firmly believe in it even if you don’t. You continue your route and leave the group behind. If you’re really afraid, wave at a (non-existing) friend in the crowd in the direction in which you’re going and say loud: “Hi! There you are” and walk firmly to your “friend” meanwhile scanning for possibilities and possible threats.

If the threat is getting more serious and you’re being attacked, fight like you trained in your krav maga classes; deal with the danger and run.

To summarize: youth groups behavior is built on 2 pillars: Boredom/Entertainment and Reputation. By acting friendly, open and confident you decrease the chance that you’ll be part of their entertainment/reputation game because you’re simply not playing along in the dynamic.

Bio
CMDR D holds an MA in Policing, an MA in behavioral Sciences and an MSc in Public Management. Additionally, D  is the only person in The Netherlands who is certified to lead (intervention) units as a bronze, silver and gold commander in both LE and firefighting operations. D is currently working on a PhD Research “Beyond the Split Second; Reality Based Training in High Risk Law Enforcement Operations”.