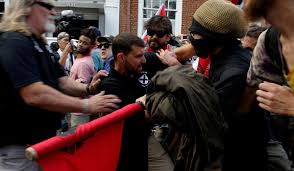 As expected, the defense team for James Fields is already at work painting Fields as a “victim” who was merely fleeing from the scene rather than targeting anti-protesters. Allegedly, people associated with Antifa had assaulted his car with baseball bats just prior Fields driving his car into the crowd. Supporters of Fields claim he wasn’t attacking anyone. He was “just afraid for his life.” Those same supporters claim Antifa and BLM supporters came to the rally armed with bats and other weapons.

Meanwhile, the white supremacist site, The Dailey Stormer, promises “bigger and better” neo-nazi rallies in the very near future. (The Virginia rally begs the question, “How does the DS define “bigger and better? By body count?”

The point of all this? Several, in fact. First, as Fields traverses the legal system, it’s reasonable to expect both extremist sides to become rather animated. (re: violent as hell) If by some twisted act of fate Fields is exonerated or receive a reduced sentence based on mitigating circumstances, the alt-Left will make all previous protests and rallies look like a slow day at Sunday school. And the Neo-Nazi movement will be screaming “blood and soil” from the top of the proverbial mountain.

Now, an excerpt from the Idiot’s Guide to Civil Warfare- Chapter 1: “Escalation”

“Boys and girls, “escalation” works like this: First, you have “differences.” Differences in appearances, social mores, ideals, motivations, and in some instances behaviours. Thus, the Us and Them mindset begins to establish itself. Next, someone from Side A articulates those differences, pointing out the perceived , or perhaps in some cases legitimate inadequacies of “Side B’s” position(s). Side B responds in kind, yet in a higher volume. This, of course, really infuriates Side A. So Side A responds in kind, yet louder still by an order of magnitude. And all the while, both A and B are screaming at any remaining sides “Those rat bastids are out to get ya’! Your only hope is to join us!”

At this point, rational thought has surrendered with a whimper to Emotion. Armed with the ever dangerous Emotion, the arch enemy of Logic, someone resorts to physical violence. He punches someone from the other side. This where the real fun (not!) begins.

B is madder than hell, now, and says “you can’t run me down if I shoot you!” A responds with, “You can’t shoot me if I blow your home up while you’re sleeping!”

Meanwhile, Sides C and D. neither of whom have any other direct involvement with either group (other than a love for drama, or are easily moved by fear-mongering) are slowly but surely drawn in, eventually drinking the Kool Aid from A or B.

And Side E, safely insulated from the chaos, sits back, prodding all the aforementioned sides with a very long stick, waiting patiently to devour the “winner.” (re: the last standing Loser)” 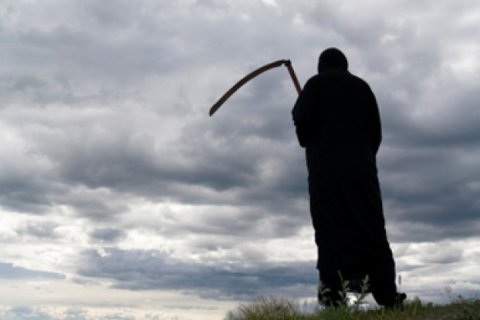 In early February, 2017, an exchange of messages with Marc MacYoung led to a post I created on a social media site. The original post may be read below: (With very minor edits as to spare the delicate sensibilities of some genteel readers.)

In the Poles analogy, Pinker uses the North pole as an example of the “far-anything.” (My term, not Pinker’s) Anything south of absolute North is “different” and, possibly, not to be trusted by Absolute North. And following along that train of thought, anything or anyone not standing on our own compass points are also suspect. In reality, we all know someone who is a few degrees left or right of us but, humanity being what it is, we’re awful quick to look at the extremes rather than the commonalities. The word “moderate” has become an obscenity to those standing on the poles.

It’s self-defeating and polarizing, folks. Fecal matter is perilously close to hitting the oscillating device. It ain’t gonna’ be pretty when it happens, regardless of how well we all think we’re prepared.

Though this post may be interpreted as “political” in nature, it’s actually a sociological observation. Jus’ so ya’ know

“In a recent exchange of messages with Marc MacYoung. I asked him if his hate mail had increased lately. Marc is a “violence professional” recognized by several legal jurisdictions as a subject matter expert. In truth, Marc is actually more of a “conflict resolution” specialist. He’s often a voice of reason when others are quick to yell, “Punch ’em” or some other such emotional prattle. And that alone can make someone a target for Far-lefts, Far-rights and the “Far-anythings.”

In reply, he asked me if I knew of Steven Pinker’s analogy regarding the “Poles.” (Pinker is a Johnstone Family Professor in the Department of Psychology at Harvard University. He conducts research on language and cognition, writes for publications such as the New York Times, Time and The Atlantic.)

I knew of Pinker and his remarks. In the “Poles” analogy, Pinker uses the North Pole as an example of the most extreme compass point. This is the spot on which the “far-anythings” reside. (My term, not Pinker’s) Anything south of absolute North is “different” and, possibly, not to be trusted by Absolute North, and likewise with Absolute South. Following along that train of thought, anything or anyone not standing directly on our own personal compass points are also suspect. In reality, we all know someone who is a few degrees left or right of us but, humanity being what it is, we’re damned quick to look at the extremes rather than the commonalities. The word “moderate” has become an obscenity to those standing on the poles. It’s my humble opinion that it’s the very lack of Moderate Voice that we find ourselves in this current state of unrest.

Fecal matter is perilously close to hitting the oscillating device in the U.S. It won’t be pretty when it happens, regardless of how well we all think we’re prepared.

The post spurred some discussion among other “violence pros” and within hours, I found myself tempted to write a treatise on the State of the Union. I refrained and for that, most of you are no doubt eternally grateful. I did, however, post an additional comment or two that further spurred further comments, e-mails, and personal contacts. Below, you’ll find one of those comments, in part:

Here is the skinny. Plain English. Take it for what you will. Most of you who know me personally know that due to my body of work, I have SME status (subject matter expert) with several federal agencies. (Domestic and global terrorism among other “specialties”) I have an aptitude and skill set that lends to “aggressive violence mitigation.” I’m considered highly capable by my superiors. However, of the several hundred (thousands) of people whom I know who or worked in the same field(s), I barely register. Despite my level of training, experience and credentials, I’m a tiny blip on the radar screen. On both the left and right of the socio-political spectrum, there are machines walking among us. And there are far more of these boogey men than you know. Thank God most have the self-restraint and cognitive ability to refrain from open engagement at this time. And yes, there are other elements that factor into that restraint such as “the bad guys aren’t on my local radar yet” or “the pay-off isn’t right…yet.”

For those of you erudite warriors sitting safely behind machine gun keyboards, thumping chests out on the sidewalks, or playing dress up and exacting violent revolt upon another’s person or property, I’m telling you…You have no idea what you’re asking for or inviting. None.”

Many of my social media acquaintances have backgrounds similar to mine, but there are some whom I have met after my retirement and only know me via the lecture circuit, community involvement, or through various martial arts-related functions. It was from this group that I received the most private contacts. Via these contacts, the most common questions regarding my post and subsequent comments were: 1. Who are these “boogey men,” and 2. “Despite the bluster, what has stopped the increasingly verbose “other side” from countering recent violent demonstrations?”

The full answers to these questions would require another treatise. However, I’ll attempt to provide very short answers to both.

First, the aforementioned machines come in many flavors. Some of them are professionally trained, highly experienced and capable… and well-armed. Some are isolationists while others prefer close-knit, like-minded packs. Regardless, they share a commonality. They understand the mindset necessary to commit violence on another human being. We only need look at the number of troops who have served in combat theaters from 1964-2017 to understand the number.  And this doesn’t take into account the additional numbers of personnel who’ve worked in the clandestine services. Of course, this doesn’t mean that every combat-qualified person has the mindset of the aforementioned boogey man. The last thing most combat vets want to see is open armed conflict in Hometown, USA. It does, however, mean that the resource pool is huge. Huge. Again, keep in mind that those “machines,” aka the boogey man, exist on both sides of the political spectrum. (We haven’t even touched on the “professional” and “amateur” opportunists,” yet.)

Then you have the Weekenders who have worked diligently to prepare themselves for open, armed conflict. There are flavors of the boogey man within this group who operate more from an emotional mindset and thus are potentially far more volatile.

This brings us to the second question: “Why haven’t they acted, yet?” There is no single reason. A belief in the Rule of Law versus violent civil disobedience, a thus far lack of “personal stake,” the right catalyst is absent, etc. But there is one particular reason that stands out, especially with regard to the Weekenders. Much of the recent politic-related violent protests have been encouraged via a core leadership that has managed to find a national Voice. Structure and organization exists on a significant scale. The Weekenders aren’t so nearly well organized and lack a central, national Voice. Broad-brush organization, central leadership, and “command and control” are MIA. For the moment.

And perhaps most important of all: Violent protests simply haven’t reached the “wrong community” …yet. When conditions are ripe, prairie fires only require a single spark.

The most important puissant Voice missing from this equation is that of the Middle Ground. It’s out there somewhere, but it has remained silent thus far. But there’s always hope.