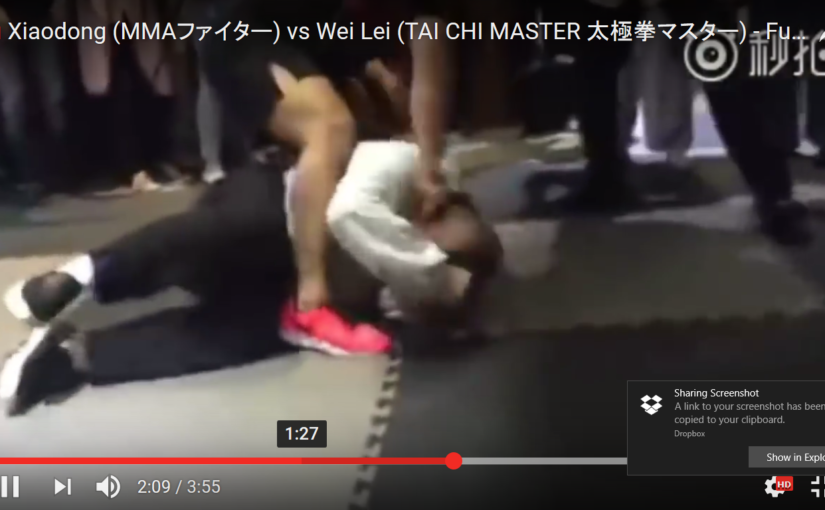 Many CM readers will have seen the media coverage of a recent incident in China, in which MMA fighter Xu Xiaodong soundly defeated “Thunder style” Tai Chi master Wei Lei in a challenge match arranged by Xu to show that “traditional” Chinese martial arts styles are ineffective. The New York Times’ article covering the match can be seen here: https://goo.gl/mGT56B [1].

The fight itself has already been the subject of much analysis and comment. What I would like to talk about is the aftermath of the fight, particularly its reported consequences for Xu Xiaodong, and the lessons which can be learned from Xu’s experience which are relevant to self-protection.

As the NY Times reports, Xu may have proved his point by winning the fight, but he has faced a powerful backlash from the Chinese media, public and martial arts community, including a statement from the Chinese Wushu Association saying that the fight “violates the morals of martial arts”. The backlash has been so severe that Xu has been forced into hiding, and has reportedly posted statements online saying that his career is in ruins and he has “lost everything”, seemingly baffled as to how things could have worked out so badly for him.

The moral outrage surrounding Xu’s actions can be understood by reference to the “Moral Foundations Theory” put forward by Jonathan Haidt and Craig Joseph. This theory is explored in detail in Haidt’s book “The Righteous Mind” [2], and a summary can be found at http://www.moralfoundations.org. In brief, Moral Foundations Theory proposes that there are five “foundations” to our instinctive sense of what is morally right or wrong:

A sixth foundation, Liberty/Oppression, was added to the model later. Caring actions are likely to be viewed as moral, harmful actions as immoral, and so on. Haidt also proposes that in society, there are two distinct groups of people: those whose moral sense is dominated by the Care/Harm and Fairness/Cheating foundations, and those for whom all six foundations count more equally.

It seems clear that Xu is in the former category. He has publicly stated that the purpose of his challenge to the traditional martial arts community was to “fight fraudulence”, or to expose the ineffectiveness of traditional systems. This shows clear Care and Fairness motivations – in his mind, the traditional schools are cheating people by taking their money but teaching them ineffective systems, so by exposing their ineffectiveness he is protecting the public from being harmed in this way, which is a good and righteous thing to do. It also seems plausible to suggest that Xu may have been motivated by concerns of Liberty, perhaps in “freeing” would-be martial artists from a perceived oppression by the traditional schools. However, Xu has failed to realise how his actions would be perceived by people in the latter category. The depth with which the traditional martial arts are ingrained in Chinese culture means that his challenge appears disloyal to his heritage, subversive of the authority of the traditional schools in society, and degrading of traditions which are viewed by many as sacred. It is this interpretation of his actions which triggered the outrage that has made him a virtual outcast.

The relevance of this to conflict management and self-protection can be understood by assessing Xu’s actions against another model, this time the model of “winning” put forward by Martin Cooper [3]. In Cooper’s model, to achieve complete victory a person must “win” on four levels:

Marc MacYoung has proposed a fifth level: survive retribution from the person you defeated [4]. If we examine Xu’s actions against this model, we can see that he won at the first level, since he was clearly able to perform in the fight; he won at the second level, easily overcoming his opponent; since the fight was consensual, criminal and civil legal consequences were not an issue, so the third and fourth levels are irrelevant; and as far as we know, the repercussions that Xu has experienced have not come directly from his defeated opponent. Therefore Cooper’s model, with MacYoung’s extension, can’t explain why Xu “lost everything” in the way that he did.

To explain the repercussions, we need to add a sixth level to the model: Protect your reputation and good name. Xu “lost” by failing to appreciate the effects that his actions would have on his reputation.

Reputation is key to all our social relationships. Our professional reputation affects our ability to find work. Our personal reputation affects our ability to form and maintain friendships and relationships. Reputation can constitute upwards of 40% of the value of corporations, who invest billions in developing and protecting it [5]. A person with a bad reputation can quickly find themselves isolated and penniless, which even if you’ve prevailed in a confrontation, been exonerated of criminal charges, escaped civil litigation and protected yourself against direct repercussions, is not a good place to be. Xu’s example illustrates that preserving our reputation and good name must form part of a comprehensive self-protection strategy.

The first step in developing a reputational protection strategy is to consider how our actions could give rise to a moral backlash. We can do this using the framework offered by Moral Foundations Theory: how might our actions be considered harmful, unfair, disloyal, subversive of authority, degrading of something sacred, or oppressive? The second step is to consider from whom the moral backlash may come. In Xu’s case, this should have been obvious – he openly challenged a highly respected institution of society, so of course the institution in question and its many supporters would rally to its defence. In self-protection, or protection of others, it will depend very much on the individual’s particular situation. For a law enforcement or security professional, the backlash may come from community groups, for example, and may have a political as well as moral motivation. For a private individual not employed in a profession where the use of force is routine, the backlash is more likely to come from friends and colleagues who can’t cope with the reality of an act of violence, however lawful, by someone they know. Thirdly, we need to consider the form that the backlash may take, and what its adverse effects might be on a social, professional and personal level. For law enforcement & security professionals, a backlash may be overt and very public, possibly in the media; for individuals, it may be more subtle, perhaps a quiet withdrawal of social contact as people seek to distance themselves. Particular consideration should be given to our online reputation via the internet and social media. A good introductory guide to online reputation management can be found at https://goo.gl/XZ4eUJ [6] – it’s aimed at corporate executives but its principles apply equally to individuals. Finally, we need to consider how we can take pre-emptive action to strengthen our reputation and good name within our professional and social circles so as to be more resilient to any future risk to our reputation, and what reactive actions we could take to repair any damage which our reputation may suffer.

Everyone’s individual situation is different, so the purpose of this article is not to prescribe solutions, but rather to raise the issue and get the thought process started. Including reputation management in our planning and strategies should help to ensure that if the worst happens, we can come out of it still able to function in society – not ostracised, baffled and broke with no idea of how we got there.

4 thoughts on “The Importance of Reputation – James Hall”