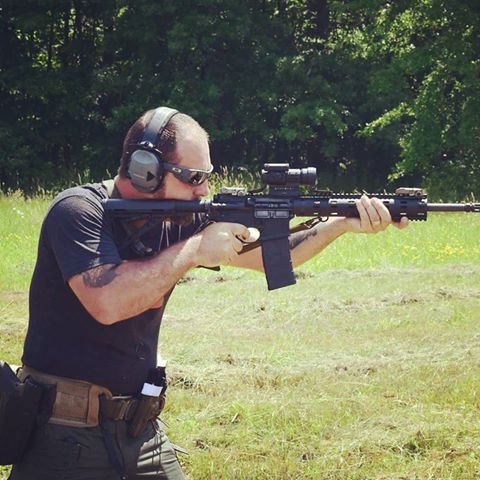 This is not accomplished by going as fast as you can. To use driving and braking as an example again, have you ever taken a day and just went out specifically to practice slamming on your brakes in your car? Probably not. However, when the moment comes at 50mph and something goes bad in front of you, you will slam on your brakes with extreme unconscious competence and stop the vehicle (providing your situational awareness is in-tact and you’re not texting or reading this article: observe). The reason you can achieve the brake pedal movement flawlessly is NOT because you have practiced slamming the pedal at speed. It is because every week you have performed literally thousands of slow, correct repetitions of going from the gas pedal to the brake pedal. If you train your fighting skills in the same slow, correct and deliberate manner, you will find that when speed is needed, it will be there. Speed is a product of smooth and correct repetition.

Improving the efficiency of your processor requires basic skills being ingrained enough to not have to use processor resources on them. Which allows you to then process information more quickly and thoroughly. This is the path to rapid and correct decision making in a fight. When you are not worrying about whether you can actually perform a movement or not, you are able to delegate those movements to the unconscious mind and allow your conscious mind to be fully engaged in the observance and decision making processes.

As the skills become trustworthy, you are able to go straight to processing your environment. This is a good step, but there’s more. The concept of maximizing your processor speed by not using resources thinking about the basics, allows you to not only solve one problem at a time, but to be able to flow through many problems, one after the other. It gets so good that you are able to set up subsequent moves with the ending of each solution. That is achieved after many, many hours of practice, force on force and mental training with positive mental imagery. Like shooting pool. First learn how to make the ball go into the pocket. With practice, we can make the ball go into the pocket with the cue coming to rest in position to make another ball go into a pocket… But for now, let’s focus on practicing the isolated skill to reliable perfection.

Positive mental imagery plays a key role in keeping you on the quick end of the spectrum during practice. This is possibly the most difficult part of training: not picturing ourselves failing. We have to DENY those negative images from gaining entry. We have all stepped up to perform at some point in time and failed. Whether at the range, or in a sport, we feared failure at the critical moment before performance. When you fear failure, you will picture yourself failing. This image will bog down your processing speed and prohibit you from performing well. Denying these images of failure, and other fear based anxieties, from entering into your observance and decision making processes will allow you to perform the fundamental skills necessary to prevail. It is truly difficult sometimes to imagine yourself doing something flawlessly correct, but it MUST be worked on. The faster we try to go, the harder it is to block out the imagery of failure.

The importance of correct practice

When we talk about practice, we need to immediately and forcefully kill the myth that “practice makes perfect”. It simply is not true.

Practice makes something reliably repeatable. But understand this very important fact: it becomes repeatable in the way that you have practiced it. FACT: If you practice it wrong, you will get really good at doing it wrong. This means, if you have made it a habit to try to go too fast, and to not seek out positive feedback, you may have actually practiced doing something incorrectly. The biggest cause of this that I see is going too fast. Remember what I said about the car brake pedal and hitting the brakes quickly? Practicing fast does not make you fast. Practicing smoothly and correctly makes you fast and correct.

Think of your neural pathways like weeds in the woods. If you want to make a new path in the woods, where it is all grown up with undergrowth, you have to walk that new path several times to even make it visible. As you walk the path for months over and over, eventually it turns into a recognizable clear path. This is just like the neural pathways that tell your muscles to fire in a certain pattern. As you practice, you are myelinating the axons, which speeds up the electrical signal across the neural pathway. This means the more frequently you practice, the faster you get at doing it exactly the way you practice.

So, again image you are going to cut a new path in the woods. However, this time, you walk a slightly different way each day and never walk over the same exact pathway twice. How successful do you think you would be at efficiently trampling the undergrowth down and making a visible, clear path? You would not. If you deviate each time, even slightly, you will not develop one well worn path. Your neural pathways are very similar. When we deviate our path of movement when practicing a skill, there is no way to efficiently train ourselves to perform it the one intended way. While it is ok to work into advanced levels where we train variants of a technique or skill on purpose, it can only be done after the basic primary skill has been perfected to an automatic, non-conscious performance ability.

The most common and pretty much expected mistake that I see newer students and shooters make is to begin pursuing speed much too soon in their training. Everyone wants to be Instagram hot and perform cool shit with the timer. As you speed up, you begin to automatically cut corners, make mistakes, fumble tasks and just plain screw up. This is what you are practicing! Every practice run that you fumble is a step backward in your training toward automatic skill levels.

Resist this urge. It is much better to perform perfectly at whatever speed you can maintain perfect pathway performance at. Remember the example of the brake pedal and your skill at emergency braking, without ever really practicing emergency braking? It is simply true that the slow, repeated perfect practice of a skill will program the brain and body to perform that skill on-demand and at greater speeds than practiced.

Speed is for testing and fun, but do not make testing the majority of your time on the range. I say this because this is what I see most people do. Practice is for doing it perfectly correct. Do not forget this. Make this the cornerstone of your physical training protocol. Self-aware unconscious competence performance with clear ongoing assessment is the goal. The more capable your body is, the less you have to think about performance, the more you understand leverage and power, the more you will be able to reach this level.