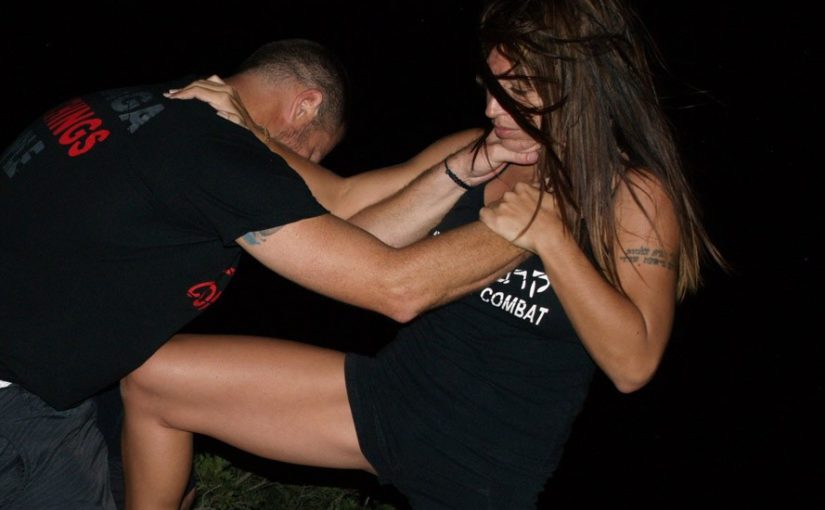 You know the scene…

Girl walking down the street, a bad guy or more try to grab her, she has her high heels on, a mini skirt and no self-defense knowledge whatsoever, but she manages with a knee or kick in the groin to get him or all of them down on their knees begging for mercy.

While this scenario may work in a Hollywood blockbuster, reality is not exactly like that.

Although most people believe that a kick to the groin is enough to “do the job,” that’s not actually the case. While a man’s testicles might be the most important part of his body as they contain the “jewels of the family,” they are definitely not the most fragile. Made of spongy material, the testicles typically absorb the shock without much damage, and Mother Nature was smarter than that and covered the testicles with layers of tough material protecting the tissue inside.

Although it depends on the surface and tools used against the testicles—for example, a metal nail vs. a leather shoe—to crush a testicle you need to apply a force of 110 pounds (50 kg) per 1 square centimeter (advantages to all “big balls” out there 😀 )! By comparison, it is much easier and more effective to tear off an ear, for example, where you need only 8 pounds (4 kg)!

While a “crushed testicle” will create some pain and a bit of distraction, assuming that you did it right, , a torn ear will cause disorientation, loss of blood, probably loss of consciousness, and a huge mental shock.

Some guys reading this article will be cringing at the thought of being kicked in the testicles—if not already vomiting at my vivid descriptions J—because for a “normal” person a kick to the groin causes a lot of pain, but are all men “normal” in this sense? What are the reasons that a man may not feel that much pain or may even feel pleasure when kicked in the groin?

(To make things easier to understand and imagine, we will call the guy who is potentially kicked in the groin, Mr. Bad. J)

To sum up, my advice is as follows:

One thought on “Why Doesn’t the Kick to the Groin Always Work? – Mirav Tarkka”