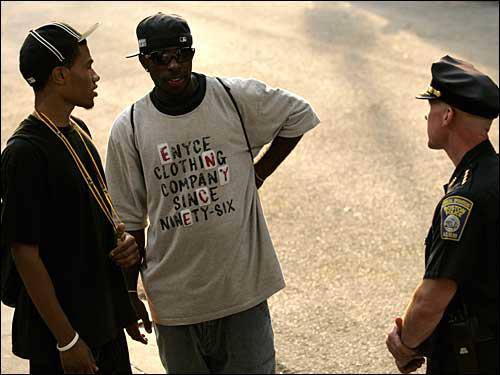 Recently, I asked Malcolm Rivers to apply the concepts of the Everyday Boundary Setting Matrix to his understanding of inner-city boundary setting for urban youth. The following article is his response.  The Matrix is a flexible framework that can be used to help understand and teach the basic elements of boundary setting and apply them to specific environments. – Erik Kondo I like the ideas and expression here a lot. I think of particular use are visuals. The boundary setting matrix is a great tool that really encapsulates the ideas involved. I like the boundary zones a lot too. The underlying adjustment that I think would be useful is based on the interplay between peer relationships and institutional relationships.

In many ways, schools are microcosms for society so the model I’m using is based on an inner-city school and interactions with the neighborhood. Within that school you have school rules and peer rules which are comparable to society’s laws and street law. The difficulty is that for students, peer culture is often based on variations of real street law. For all intents and purposes, society, as represented by social workers, teachers, cops, etc. only visits and the networks that dictate street law and peer relationships live in those communities, making them, in many ways, the true dominant force. Young people in those communities might spend 6 or 8 hours in school but have to spend the remaining 18 or 16 hours in environments dominated by street law. Moreover, school and society often can’t protect these young people from consequences of peer/street code violations which often carry significantly higher penalties than most that institutions can dish out. Thus, respect, as understood in those communities, is a crucially important currency that can literally be the difference between life and death and is governed by different factors.

The version of respect that exists in these environments is based on a couple of factors: willingness to resist or stand on principle, adherence to cultural rules, goodwill and respect for others, and determination to enforce boundaries. Of particular importance is boundary enforcement, which, in many ways, lays the foundation for the rest because respect isn’t so much earned as enforced. Due to various forms of social disorganization, young men have outsized influence in inner cities, leading to environments where respect is an invaluable commodity due to its role in the young men’s competition for dominance. This makes the concept of mutual respect a harder sell because the individual or group with the most respect “wins” and respect can only be earned by enforcing their boundaries or violating others’. If a mutual respect has been established, the first person or group willing to violate that respect, if successful, can shift the balance of power toward their favor. Thus, challenging the boundaries of others is frequently a good way to grow resources (peer respect, etc.) and can even be a form of preemptive defense. Contempt borne of underenforcement can lead to loss of resources or even something more permanent, thus, the willingness to enforce boundaries becomes paramount in this version of respect.

One of the elements that affects this matrix, however, is the role of noncombatants: those who are, for whatever reason, not participating in the pursuit of peer dominance. Most of these noncombatants don’t have much in the way of respect and are more ignored than anything else which can make them safer but keeps them powerless, should a combatant turn their attention in their direction.

“Trying” and “testing” are a big part of the aforementioned competition in these schools and neighborhoods. The idea is that in many interactions, even with authority figures, young people test the boundaries of others, looking to see whether they’ll enforce them and to what degrees. It’s an aggressive way to establish a pecking order or to “score points” off of someone they perceive as weak. The additional difficulty is that, as a result, giving respect to get it can be seen as weakness, especially when combined with a perceived inability or unwillingness to enforce boundaries. This perception of weakness can invite a greater number of respect violations which necessitate more regular, or more extreme, enforcement. On some level it’s almost beneficial for folk working and living in these environments to be tested so as to give them a chance to be seen enforcing their boundaries because the perception, at least, is that everyone is watching and looking for someone to “score points” off of.

In many communities and schools, the perception that the peer group is watching to see how an individual reacts and to assess the level of respect to give them is a significant factor. It’s this consideration, the balance of society/school’s rules and peer/street law, that causes individuals who know they’ll be caught and face consequences to use violence to enforce boundaries anyway. This seems ridiculous from the perspective of the larger school/society but when the goals are adjusted for peer respect, it makes a lot more sense. If the peer audience values the willingness to enforce boundaries and stand on principle, even in the face of consequences, using violence, even when you know you’ll be caught, makes perfect sense. Violence in these instances is just another form of communication to the victim and the larger peer audience: “here’s what I’m willing to do because someone violated my boundaries. No one can protect you from my wrath, so leave my boundaries alone.” In such cases, “overenforcement” is a variable concept, because extreme violence as part of boundary enforcement can be beneficial, depending on which matrix we’re considering: peer/street or school/society. This can lead to inability to code switch and contextually inappropriate communication and enforcement like the woman making a scene in a grocery store, etc.

Thus, the boundary setting matrix works perfectly but is goal dependent. If a young person wants the respect of peers who’re associated with the types of subcultures prevalent in inner cities, their boundary setting matrix, by necessity, will look different than a peer whose focus is on success in the larger school/society, etc. The big challenge is finding ways to balance the two boundary matrices so that the young people don’t have to choose between putting themselves in danger with peers or sacrificing their futures in society. Another potential solution is to significantly damaging the street/peer hierarchy to establish the school/state/society as the dominant force in the environment more directly. This derails the insertion of street consequences into school environments and such. As for respect for institutions, I think you hit the nail on the head. Ultimately, those balances of communication and enforcement contribute to institutions remaining functional and not breeding significant contempt.

One thought on “Boundary Setting and Anti-Social Subcultures – Malcolm Rivers”