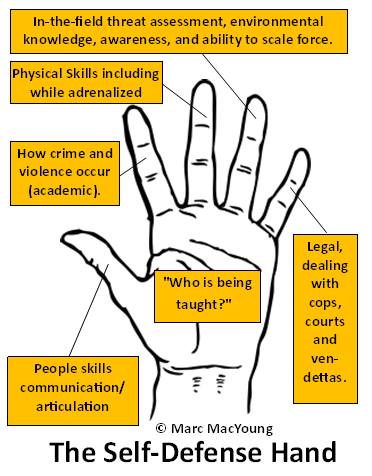 Your ring finger is In-the-field threat assessment, environmental knowledge, awareness, and your ability to scale force.

Notice I didn’t use the term ‘situational awareness.’  That’s because it’s one of the most misunderstood and abused terms in this business. It’s also the biggest handwaves in teaching self-defense. By that I mean, “Oh yeah we teach it, now let’s spend the next three hours teaching how to break someone’s neck.” Remember how I said there’s a problem about not knowing what self-defense is? It just came home to roost starting with not knowing when there’s danger around.

I have a saying: You can’t spot abnormal until you know what normal is. You can’t spot dangerous until can tell the difference between it and abnormal.

Simple saying, profound implications — especially when it comes to keeping you from bleeding out on the sidewalk. I tell you this because if you can’t even recognize normal you won’t be able to see dangerous slithering up towards you.

Five points about this normal/abnormal/dangerous idea.

One, most of the time there is no immediate danger in an environment.  So constant tacti-kool/ninja awareness isn’t necessary. Being able to see what ‘normal’ (hence not-dangerous) for an environment reveals the lack of danger. This may not sound like much, but it is a critical element of long term survival and preventing burn out. (It is however, beyond the scope of this already too long article.)

Two, normal changes from place to place and at different times. (You need to be able to read these changes — for example, when the families with children leave, the chances of trouble go up.)

Three, there is a difference between weird and dangerous. A guy riding a unicycle, playing bagpipes and wearing a kilt is weird, but it’s not dangerous. Even without taking things that far, there are situations that are abnormal for an environment, but not dangerous. In fact, there are some pretty standard variations of abnormal. To the point they become normal-abnormal — such as how a stranger approaches to legitimately ask for something in a parking lot.

Four, there are certain ‘clusters of behaviors’ that indicate when danger is present. (Yes, they predictably show up together; if you’ve done your homework in index-finger-land you’ll know what they are.) When you see them danger is developing.

Five, the greatest danger comes hidden behind seemingly ‘innocent, but normal-abnormal social scripts,’ except their not. They’re abnormal and obvious, but with an extra set of behaviors that make them dangerous. Hiding danger these behaviors present both a flawed imitation and violate normal social boundaries. They have to in order to make the previously mentioned clusters work.

For example a stranger walking right up to you while pretending to be asking for directions — instead of stopping at a safe distance. This is why it is important to know normal, abnormal and dangerous. Normal is strangers don’t talk to you in parking lots. Abnormal is someone tries to. Normal-abnormal is that person stops about fifteen feet away, assumes a non-threatening body posture with hands clearly displayed while speaking. Dangerous is him talking covers the fact he’s closing the distance and his hand is out of your sight.  This parking lot robbery scenario is easy to figure out. Do this kind of break down of normal, abnormal and normal-abnormal in all the areas you regularly frequent. Then watch for anyone attempting to develop those circumstances on you. Normal, abnormal and dangerous are far more nuts-and-bolts practical standards than what people who use the term ‘situational awareness’ usually mean.

Taking this out of exclusively crime, let’s talk about recognizing when you’re in a potentially violent situation. How can your behaviors influence if it goes violent or not? Have you looked into that subject? (Hint, the answers are on the first two fingers.) If it does go physical:  How much force is appropriate given the circumstances?  Not every situation is a life or death struggle. Have you looked into scaling and controlling your level of force? If you don’t know that, and don’t know how to tell which ones aren’t and which one are, then you’re in trouble. You’re either going to over or under react. Either is bad; that’s why it’s important to be able to understand scaling your force before you’re called on to do it. The ring finger is where you have to apply it under pressure. Of course it also helps if you have the physical ability to do so (see the middle finger).

The pinky finger is legal, dealing with cops, courts and vendettas.

Want to know the difference between training for self-defense and actually doing it? When you do it, you’ll have to answer for it.

Remember how I said self-defense is legal, but most violence isn’t? Yeah here’s a real simple rule of thumb, the cops tend to arrest the winner of a fight. Why? In these days of mandatory arrest, somebody has to go to jail. Generally speaking when it comes to a ‘fight,’ you have Asshole #1 and Asshole #2. The winner is usually the bigger asshole. The loser is punished by pain. The winner is punished by arrest.

The second self-defense situation you’re going to find yourself is convincing the authorities you weren’t the bigger asshole. This is harder than you might think because after SODDI (Some Other Dude Did It), the most common dodge for illegal violence is claiming ‘self-defense.’ Now the really bad news, cops are really good at tripping up people who try this dodge. Unfortunately, it also means they’re really good at tripping people up who did act in self-defense.

Here’s a hint, your ability to talk-your-way-out-of-a-situation (thumb) also serves to articulate why people skills weren’t working, your knowledge of how crime and violence happens (index finger) helped you assess the danger, what  physical skills you used (middle finger), your awareness (ring finger) let you see it in time, try to avoid it and when that failed, allowed you to make a reasonable decision on the degree of force. All of those will go into what you have to tell the cops when you claim self-defense.

Sound like a lot of stuff to know? Well, if they don’t like your answer, you’re going down. Now the really bad news. It’s not going to be the officer-you’re-talking-to’s decision to arrest you, usually the order comes from above. Often it’s been decided by someone who isn’t even there. (While they were talking to you they made a phone call.) The officer talking to you might believe you. But, if that word comes down, he has no choice. Those questions you’ve been answering were to build a case against you. If that happens, then the only hope you have is that all those things you said in your statement can be used by your attorney to beat the charges.  If you don’t want to spend time in prison you have to know how to play this game — including knowing when to shut up and get your lawyer there.

By the way, in case you think I just said shut up and lawyer up, no. You can’t. If you claim self-defense you have to make a statement, then it becomes a matter of when and what your lawyer will allow you to answer. (There are certain trick questions that if you answer, it will be deemed as an admission of guilt and the green light for an arrest — your lawyer knows how to spot them.) Then there are things that you have to get into your statement (like your threat assessment model).

Here’s an important idea. Take the tip of your thumb and pinky and put them together. Remember how the thumb represents people skills and communication? If you also remember there is a tag on there, articulation. That’s the finger press. When you make a statement regarding your self-defense, you will be interrogated. And yes, interrogated is the right term. One of the best ways to trip someone up during interrogation is coming at you with other possibilities. It’s not enough to be able to say ‘it was this.’ You have to be able to explain how you knew it wasn’t something else. This is critical because — if you remember– the set ups for high levels of violence (e.g., robberies) are commonly hidden under normal social scripts. For example, you’ll have to be able to answer, “No, he was pretending to ask for directions. If he was, he would have done A,B and C, instead 1,2, and 3 happened.” You won’t be able to do that if you don’t know what normal behavior is. This is another reason why people skills are important. They can keep you out of prison.

You may not want to believe it, but prison can be the warm fuzzy side of the aftermath of violence. The other version is the person you had to defend yourself against, waiting in the shadows with a shotgun for you to come home. Yeah, funzies. Welcome to the land of vendetta.

Equally bad news is if the guy you had to defend yourself against was the member of a criminal organization or violent family.  There are a lot of lowlifes out there who do not have a strong support network, so if you drop them, there won’t be a vendetta. Oh sure they’ll make noise about it (especially as they’re limping away), but will anything come of it? Usually no. This ‘woofing’ is a face saving retreat. Still there will be enough times that the guy backs up on you to warrant extra precautions for the next few weeks. You know all that uber macho codes and tactical awareness that wannabe gunslingers like to say you should be at all the time? Yeah, if you have a vendetta against you, you’re going to need that…

At the same time, there are also violent groups who will come looking for you for hurting a member or affiliate.  And oh yeah, just so you know, they aren’t above shooting at you when you’re with your family. Having said that, if you’ve pissed off some next-level-folks, nothing short of running off to another state (or province) and changing your lifestyle will be enough. Yes, it can get that bad.

I came up with this Hand of Self-Defense mnemonic to help you prevent the kinds of catastrophic failures that normally happen when people try to actually use their self-defense training. Last time I talked about a wing coming off a plane in mid-flight. That’s not a bad analogy on the degree of how things can go wrong. And how if you don’t know where to look you won’t see the potential problem until it’s too late. Self-defense is a lot more complicated than people think. The hand will both help you organize important information, but help you from doing the common mistakes people make when it comes to self-defense. But that’s not the only reason I came up with it.

It’s a diagnostic tool for your training. Come back to it now and then and see what aspects you’ve either been ignoring or overly focusing on. While self-defense is itself a balancing act, now you have a way to maintain that balance, both in your training and out in the streets.  A balance – that if you’re forced to defend yourself —  can keep you out of the morgue, hospital, prison or the poor house.